‘Lizzie’: Reimagining gives plenty of reasons for New England girl to take out the parents 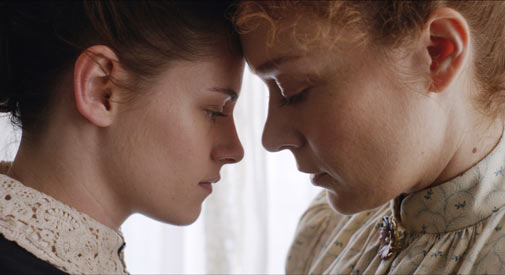 ‘Lizzie’: Reimagining gives plenty of reasons for New England girl to take out the parents

“The Legend of Lizzie Borden,” which starred Elizabeth Montgomery – playing against her wholesome image as Samantha on TV’s “Bewitched” – gave me the willies as a teen back in the summer of 1975. It, “The Shining” (1981) and “The Exorcist” (1973) each kept me up at night. I loved the panic-inducing thrill of those indelible films, though my parents, woken by my roaming of the halls and toggling of light switches, did not. That Montgomery TV movie was something of a rare accomplishment: erotic, bleak and perfectly orchestrated for the small format, especially the way it so effortlessly wove in the Lizzie Borden poem from a relentless chorus of children chanting, “Lizzie Borden took an ax, gave her mother 40 whacks …” 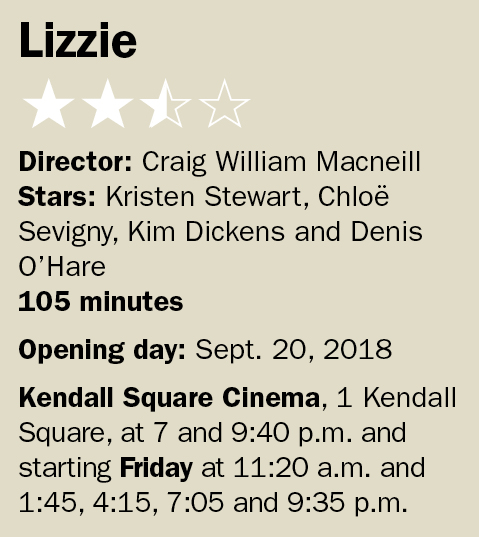 It’s hard to imagine there’s a human out there – especially in New England – unaware of the notorious murder of Borden’s parents in their old Fall River home, her alleged involvement and the sheer gruesomeness of it. The tool of the bloody deed and the amount of strokes (slightly exaggerated) articulated in the poem are pretty spot on. True, the crime happened some 125 years ago, but the image of a nude, ax-wielding daughter felling her parents still captures the imagination. So much so that we get “Lizzie,” which adds some twists to the lore, namely that Lizzie (Chloë Sevigny) and the Bordens’ Irish housemaid, Bridget Sullivan (Kristen Stewart), were lovers, and that Sullivan was more directly complicit in the crime.

As the film, directed by Craig William Macneill (“Henley”) and written by Bryce Kass, has it, Pa Borden (Jamey Sheridan, far from his cuckolded hubby in “The Ice Storm”) was a land-rich miser so set in his ways that in 1892 he refused to upgrade to electrical power. As painted here, he’s also nothing shy of an intolerable prick. Forget that he snatches land from immigrant farmers unaware of their rights or that he’s cutting Lizzie and her sister (Kim Dickens) out of the family fortune. Those indignities pale in comparison with the merciless beheading of Lizzie’s prized pet pigeons or the lecherous, middle-of-the-night visits to the bed of an unwilling Ms. Sullivan. The grim, tortured resignation etched on her face is the same on the countenances of Lizzie and her stepmother (the great Fiona Shaw, not given enough screen time) as they lie in their respective beds, clearly aware of what’s going on in the other room. Not a happy house, but a perfect postcard from the Gilded Age – where pain and angst were hidden away behind prim posturing and glistening gold platting.

As expected, push comes to shove and the deed goes down. You feel badly for Shaw’s stepmom, who for the most part is a bystander, but given the allegations against Harvey Weinstein and the #MeToo movement, the taking of Pa Borden is as righteous and cathartic as Willard hacking into Kurtz.

Much of “Lizzie” hangs on mood and emotion. Sevigny, always one to push boundaries (she has chided Macneill publicly for not using Stewart enough) exposes a raw anxious nerve in her tremulous passion for Sullivan (the scenes of their longing don’t carry on long enough) and the anger and resentment that boils throughout as she struggles against her father’s oppressive trespasses. All the elements are on the page; Noah Greenberg’s lens captures the tense home in perfectly framed muted offsets, and the frenetic, moody aural overtones are meted out adroitly, tightening the already taut atmosphere to a breaking point. It’s a glum and gorgeous composition, but somehow the picture rings hollow. Why is a bit elusive. It’s clearly no fault of the performers. Perhaps the period, dour in our minds, is a damper to the eroticism, but even the bloody crescendo we all know will come feels a bit off – riveting, but not visceral enough despite the arduous, repetitive plunges accompanied by the macabre sounds of cranium cracking and blood splattering. You’re so tight on Lizzie’s face, until an arterial spay paints her upper lip, that she could be shucking oysters.  No matter, “Lizzie” is an engrossing go. It doesn’t deepen the legend so much as it resurrects it. The crime at the epicenter still remains unsolved (yes, she got off) to this day. It’s a cold case that if explored to the truth might make a fine film with something new to say.