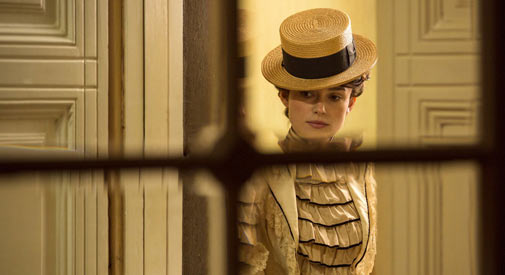 “Colette” is an acerbic but middling tale of identity and creative integrity, hampered by an enraging male lead and haywire, inconsistent visuals never able to fully grasp its story or keep up with its star, Keira Knightley. Any moment it sings is because Knightley is playing the note. 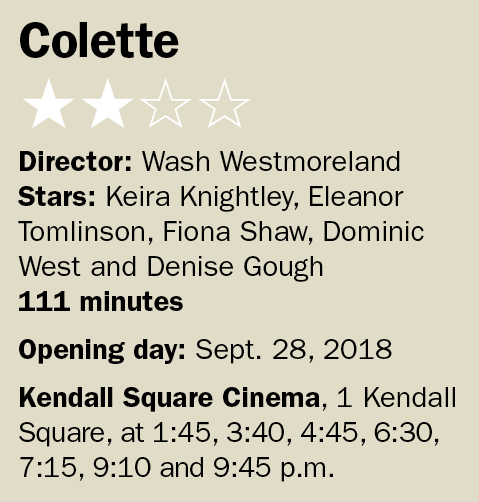 Half the work of “Colette” should be accomplished by simply revealing the effusive, defiant character at its center, a formidable figure who broke barriers with unabashed glee. The natural intrigue surrounding the famous French novelist, coupled with Knightley’s searing performance, makes the stumbling script and filmmaking all the more confounding. How could such naked and rich material get such a woefully mediocre touch? Director Wash Westmoreland (best known for directing the 2014 weeper “Still Alice”) along with screenwriters Richard Glatzer and Rebecca Lenkiewicz haven’t so much told a coherent story as chosen moments at random to highlight – some with facts skewed for cinematic purposes – that offer us glimpses of a life that would’ve been better served if those flashes weren’t so brief. From the start of her marriage to the insufferable Willy (Dominic West, in a spluttering and arguably purposefully obnoxious performance) through her forced apprenticeship as Willy’s ghostwriter to the moment she reclaims her agency, each beat is sped through; it’s entertaining enough, but nothing that lasts past the end of the film itself.

Westmoreland’s direction is similarly uninspired, laying most of the responsibility of storytelling on Knightley’s expressively androgynous striking features, peppering the film with scenes that lack clarity, reeking of a filmmaker in search for pretty but vapid shots. If only the story were in the inventive hands of a Lynne Ramsay or Jane Campion. Knightley’s three-time partner in crime, director Joe Wright, also could have turned this character study into something sweeping and visually romantic without losing the character of Colette herself.

As Colette, Knightley is as vulnerable as she is fierce, with a clipped tone and withering glare that could silence anyone who might try to stand in her way. She comes alive further when Colette is allowed to express her desires with other women, unshackled from the gluttonous Willy – Knightley and West don’t share a fraction of the chemistry that she does with Denise Gough’s Missy, her later in life romantic partner. Gough also shines in the film; there’s an entire other film to make of Colette and Missy’s romance (though it’s a missed opportunity to cast a transgender actor in a role that all but calls for it).

Those moments of romantic and sexual intrigue, along with each step Colette takes to separate herself from Willy’s hand, are when the film shines, be it when Colette makes friendships of her own, tries her hand in pantomime or steps out in a fetching double-breasted suit that plays wells into her sense of androgyny – all highlight the spirit of the character that the film so often dulls in its rote storytelling. It’s a worthwhile viewing for Knightley alone, and a role more than worthy of her talents. It’s just a shame the rest of the film and artistic team couldn’t quite rise to the same level.