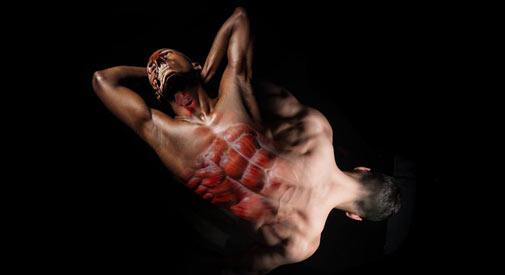 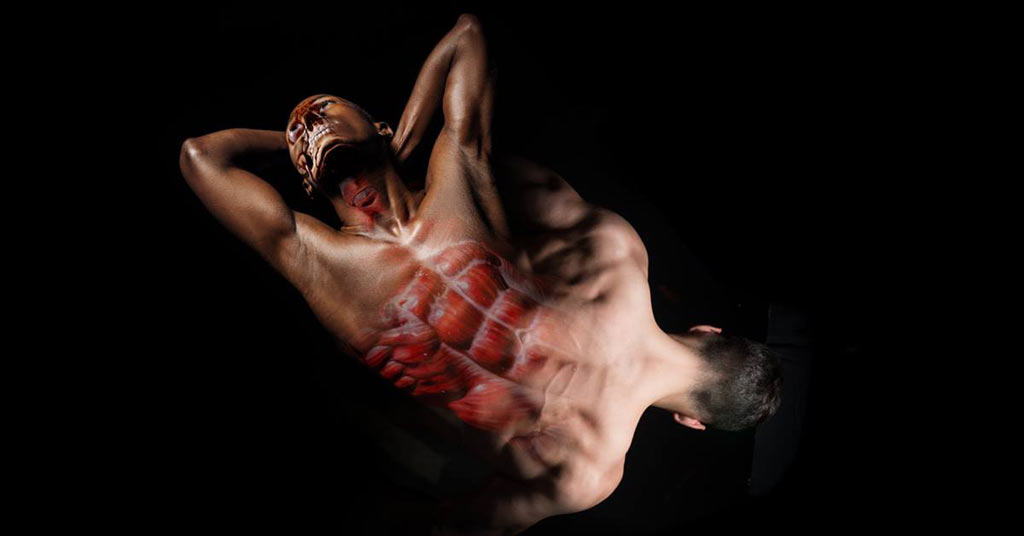 Set or art installation? That’s what comes to mind when walking into the main stage of Central Square Theater, where “Frankenstein” is playing. The set, designed by Cristina Todesco, is beautiful in its structure and design – red and silver, with two floors and clear panels that open and close like drawbridges. We see a man pace on the second floor, and on the first, a living, breathing, five-bodied organism writhes. Play or movement piece? you may think as the creature breaks free, gasping and panting, going from a five-bodied monster to a six-bodied one before reducing itself to three. It is a play, based on the book of the same name, but certainly one of the more visually stunning theatrical events I’ve seen in a while. 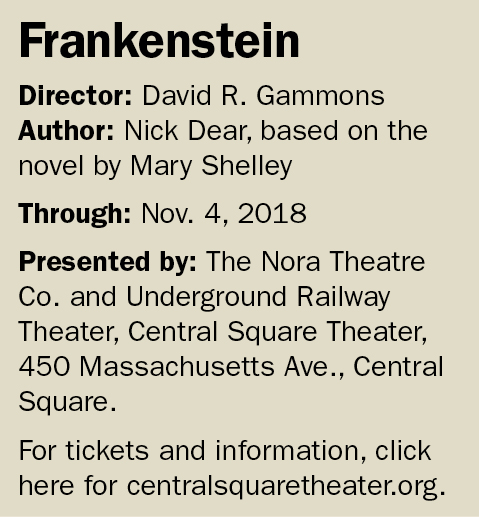 Victor Frankenstein (John Kuntz) has created a Creature from human remains, so hideously ugly that Frankenstein himself shuns it. Lonely, friendless and doomed to wander, the Creature finds companionship in a blind old man, Delacey (Remo Airaldi). Delacey too is lonely; his son Felix (Omar Robinson) and daughter-in-law Agatha (Ashley Risteen) have left him alone in the house with a bit of food. After feeding the Creature, Delacey takes it upon himself to tutor it, teaching it to read, among other things, Milton’s “Paradise Lost.” This idyll comes to an end when Delacey’s kin come home and freak out at the appalling ugliness of their father’s new companion, casting him out once again. Desperate to find the unresponsive Frankenstein so he might make it a companion, the Creature kills his younger brother, William (David Keohane), knowing that Frankenstein will have no choice but to respond. But Frankenstein fears the Creature too much to give it what it wants, and paradise is lost for all of them.

David R. Gammons directs a truly ensemble piece, although some of the cast members have breakout moments. Airaldi is moving, both in the roles of Delacey and Frankenstein’s father. Kuntz is appropriately restrained as Frankenstein, and Robinson, beseeching Frankenstein to give him a mate as the Creature, is heartbreaking. But the real work comes from the Creature itself, whether it be two-bodied, three bodied, five- or six-bodied. Every actor in the show is, at one time or another, part of the Creature. Its movements are as one, its limbs the connected limbs of all the actors. It is remarkable to watch. Rachel Padula’s costumes lend themselves well to movement; the actors are in white for the creature, with various utilitarian pieces hanging on the sides of the stage – raincoats, a bodice, a shawl.

One cannot help but feel sympathy for the Creature, who did not ask to be born, and is merely an echo of the way he is treated: Abuse begets abuse. He enjoys “Paradise Lost,” yet “Satan’s the one I sympathize with. For like Satan, I was cast out, and I did no wrong.” It’s a deep, prescient play. I couldn’t help think, with some anxiety, about artificial intelligence and what will happen with it. As Frankenstein’s fiancée, Elizabeth (Ashley Risteen), says to him, “You’ve meddled with the natural order and led us into chaos.” Climate change! Overpopulation! Sinead O’Connor ripping the Pope’s picture in half! Such was my thought bubble during the seamless one hour, 45-minute performance. Undoubtedly, you will have your own.