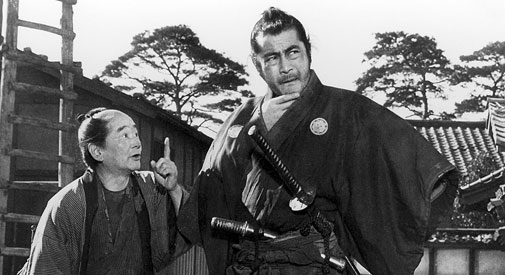 One thing I dislike when reading about film: reviews or other critical pieces infused with the word “I.” It’s not about you, it’s about the art, and letting your words about the art convert that “I.”

That said, here “I” go – and I promise to get to Akira Kurosawa, but indulge me for a moment.

Growing up, I wasn’t really that big a film fan. Granted we had only three channels the aerial could catch, and living in a town of 3,000 you had to drive two towns away to find our single-screen theaters, which didn’t get “Star Wars” until six months after its opening. (One was just an auditorium in a town hall.) So for me as a kid, film was mostly John Wayne and Godzilla, and while I couldn’t get enough of the man in the rubber suit, I didn’t like the former much – he seemed phony and too righteous, when the world around me was a darker, less black and white place. You knew things didn’t get resolved by some beefy human with a twangy drawl riding in at high noon, guns blazing.

The one other movie during this era that grabbed me was “A Fistful of Dollars” (1964). Not only was Clint Eastwood’s no-name badass cool and scruffily handsome, he answered Wayne with moral ambiguity; in those spaghetti westerns the good and the righteous often got their asses kicked, hard. Even with its quirk and dark, tongue-in-cheek humor, Sergio Leone’s cornerstone western felt genuine, authentic from the top down the first time I saw it – and it still does today, hundreds of screenings later. (Though over time there would become many Wayne films I would came to adore – “The Shootist,” “Stagecoach,” perhaps mostly “The Man who Shot Liberty Valance.”)

Flash forward to college. As part of my English major at a small liberal arts school, film was on my eclectic list of electives, dubbed “clapping for credit” and quite popular with athletes (I’ll let you all guess my two sports) because the professor, a man named Roger Farrand used to lecture us for a scant half-hour, then roll film; by the time the lights came up, there was maybe five to 10 people remaining of the 30-plus people enrolled. He loved film so much and was so excited by it that if you paid attention during his preamble you could walk out and still safely get a B – he told you everything you needed to know for a quiz or paper.

My first Farrand class, of many, was “East Asian Film.” By this time in my life the number of foreign language films I had seen could be counted on two hands, and I was dreading the thought of “reading a film,” but when he told us that Kurosawa’s 1961 “Yojimbo” was the blueprint Leone followed three years later for “A Fistful of Dollars,” scene by scene, line for line and even occurring at the exact same time in history, my curiosity was piqued. I was riveted from frame one by the masculine score and Toshiro Mifune’s indelible swagger (who knew someone could be as macho, cool and commanding as Eastwood?) and annoyed as my fellow students trickled out. When the lights came up, I felt transformed. Those Japanese drums filled my head. On to “Woman in the Dunes” (1964), “Tokyo Story” (1953), and “Eastern European Cinema” the following semester and a Farrand class any time he was teaching one. I was hooked.

Okay, indulgent segue off, thanks and apologies.

The reason for all this is to inform you that you too can get your Kurosawa on with a weeklong retrospective kicking off at The Brattle Theatre on Wednesday with a screening of “Yojimbo” starring Kurosawa’s longtime alter ego, Mifune, presaging the Eastwood role as he sides with peasants caught between warring gangs in a lawless land. Also on the bill is “Sanjuro” (1962), the director’s follow-up companion piece. The series, “Kurosawa in History” is in part to commemorate the 75th anniversary of the Japanese film director’s first feature film, “Sanshiro Sugata” (1943), which is unavailable in a quality format. All films will be exhibited in 35mm prints.

Two days later, on Black Friday, Kurosawa’s epic “The Seven Samurai” (1954) shows. Once again the plight of the poor and disenfranchised is taken on by those skilled in martial force and dislocated from society in large. It’s Kurosawa’s best-known film, remade faithfully in 1960 as the “The Magnificent Seven” with an eye-popping cast that included Steve McQueen and Charles Bronson – and I think we all can agree to just forget the game but inferior 2016 retread starring Denzel Washington. On Sunday you can catch “The Hidden Fortress” (1958), the chassis Lucas would base his “Star Wars” trilogy upon (a warrior and two fools break into an impregnable fortress to save a princess) and one of the director’s many forays in the realm of the bard, “Throne of Blood” (1957) a samurai adaptation of “Macbeth” – both starring Mifune. “The Lower Depths” (1957) and “Red Beard” (1965) are also on the slate. The series concludes Nov. 29 with “Rashomon” (1950), the tale of a robbery, a rape and a murder as told through four POVs and something of a nonlinear narrative, techniques in story-telling that were held as experimental and cutting edge at the time. The film was rewarded with an early Oscar for Foreign Language Film.

Of my favorites, you can treat yourself to the noir detective story “High and Low” (1963) and Kurosawa’s take on “King Lear,” 1985’s “Ran,” at home – unlike the Eastern films that transformed me and the western, they aren’t on the list.