‘Magnificent Seven’: New, Benetton-diverse crew is out for cool justice in the Old West 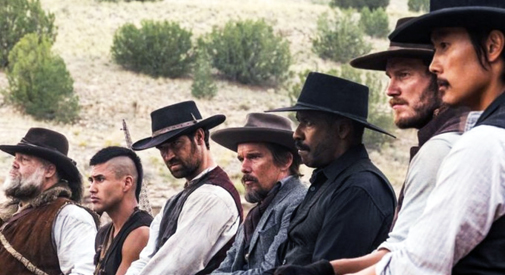 ‘Magnificent Seven’: New, Benetton-diverse crew is out for cool justice in the Old West

Steve McQueen, Charles Bronson and Yul Brynner – that’s a pretty tough trio to beat in any context, and just one half of the star-studded cast of the original “Magnificent Seven.” That Western classic directed by John Sturges was itself a rebranding of Akira Kurosawa’s “The Seven Samurai” (1954) and, while the cross-genre translation made sense back in 1960, the current remake by Antoine Fuqua (“Shooter” and “Training Day”) doesn’t offer much of a spin besides boasting a Benetton-diverse crew (an African American, Asian, Native American and Mexican among the mix) and even then, with the exception of one “his kind” comment in reference to Byong-hun Lee’s blade-wielder from China, there’s not one drop of racial tension. Had the septet been dressed in hot pink, the bad guys wouldn’t take notice. It certainly wouldn’t flavor their dull backlot dialog, but it might improve their ability to shoot and hit anything, because as the movie has it, their blazing guns, sans a lone Gatling gun mounted outside the cowpoke town, couldn’t strike the broadside of Kim Kardashian’s famous posterior. 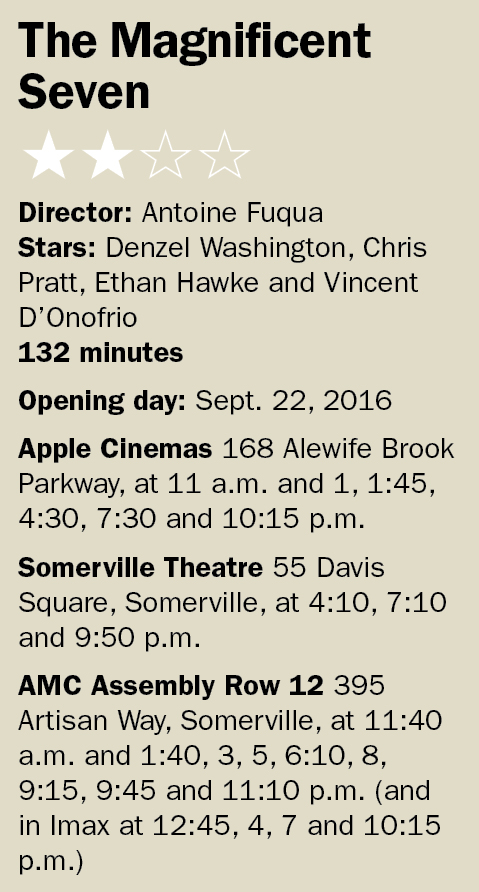 Fuqua’s posse, which features Denzel Washington, Chris Pratt and Ethan Hawke, is a pretty well-armed lot, but as they team up and ride out it becomes rapidly clear that something’s off with this “Seven.” Sure, the scenery’s panoramic and lovely, but after a long bouncy canter across the prairie, saddle soreness sets in well before the first bullet’s chambered. What’s missing is personality and philosophical idealism, let alone brooding macho conflict and color – all requisite when telling a tale of morally ambiguous men walking in a lawless land. It’s as if Fuqua took Sturges’s blueprint, connected the dots but forgot to bring his palette to the set.

Things begin promisingly enough as the town folk of Rose Creek hole up in a church fearful of a land baron with the asinine name of Bartholomew Bogue (Peter Sarsgaard). They’re not sure whether to give into his demands or head for the hills, but before the assemblage can make any decision, in storms Bogue – as if he’d been listening outside the door the whole time – flanked by bearded minions in ten-gallon hats and dusters, a few of whom spit tobacco on the floor just to underscore their poor manners and insatiable irreverence. Bogue wants all the town’s land at 20 bucks a lot, so he can mine it for gold. I’m not exactly sure how far $20 would go back in 1878 or what the real estate market might be in Rose Creek. It’s a fairly nice, verdant place, but it seems like there might be another lush dell or two just over the ridge. Needless to say, the timid people of Rose Creek dig their heels in and a few die cruel deaths before their church is incinerated.

One newly grieving widow (Haley Bennett) bent on revenge enlists Washington’s bounty hunter to take on Bogue, who’s busily buying up an army to annihilate the town if his terms are not met. Washington quickly picks up Pratt’s wise-cracking, bourbon-guzzling Irishman, Faraday, and onward they go, picking up another of the seven and moving on. The affect plays out with all the excitement of picking a sandlot baseball team. “Wanna come join us on a suicide mission?” “Sure thing.” Next.

The film gets draped around Washington. His Sam Chisolm is supposed to be something of an amalgam of Clint Eastwood’s “Man with No Name” and a corporate strategy wonk, but underneath the broad black hat – starkly reminiscent of Brynner’s – that’s pulled down so low we can’t see he eyes or soul, the fine thespian’s natural charisma gets muffled and muted. Fuqua too also seems to be borrowing from both Sergio Leone and John Ford, almost arbitrarily so, and when James Horner’s “Big Valley”-esque score tamps in, the whole experience becomes a derivative patchwork of other films done before and better.

Hawke, who worked so well with Washington under Fuqua in “Training Day” (2001), gets one of the scant juicy roles as the rebel sharpshooter named Goodnight Robicheaux (an ostensible nod to Robert Vaughn’s Lee in the original), who has a Southern gentlemanly air about him and PTSD from too much carnage. Pratt effectively recycles the amiable jokester schtick that worked so well in “Guardians of the Galaxy,” though it feels a bit out of place here, and Sarsgaard is deliciously dastardly in the two-dimensional role of Bogue, while Bennett soulfully delivers the heart of the helpless people caught in the crossfire.

To its credit, “Seven” moves quickly enough and it is visually stylistic and crisp, but the whole time I just couldn’t stop thinking about Ford, Leone, Kurosawa and Sturges or even Sam Peckinpah’s brilliant “The Wild Bunch” (1969) which visited similar territory with biting nostalgia. Those men and their masterworks were magnificent. To tackle such an updating without fully loaded guns is not a wise thing.