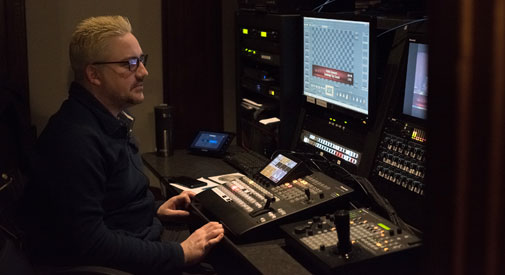 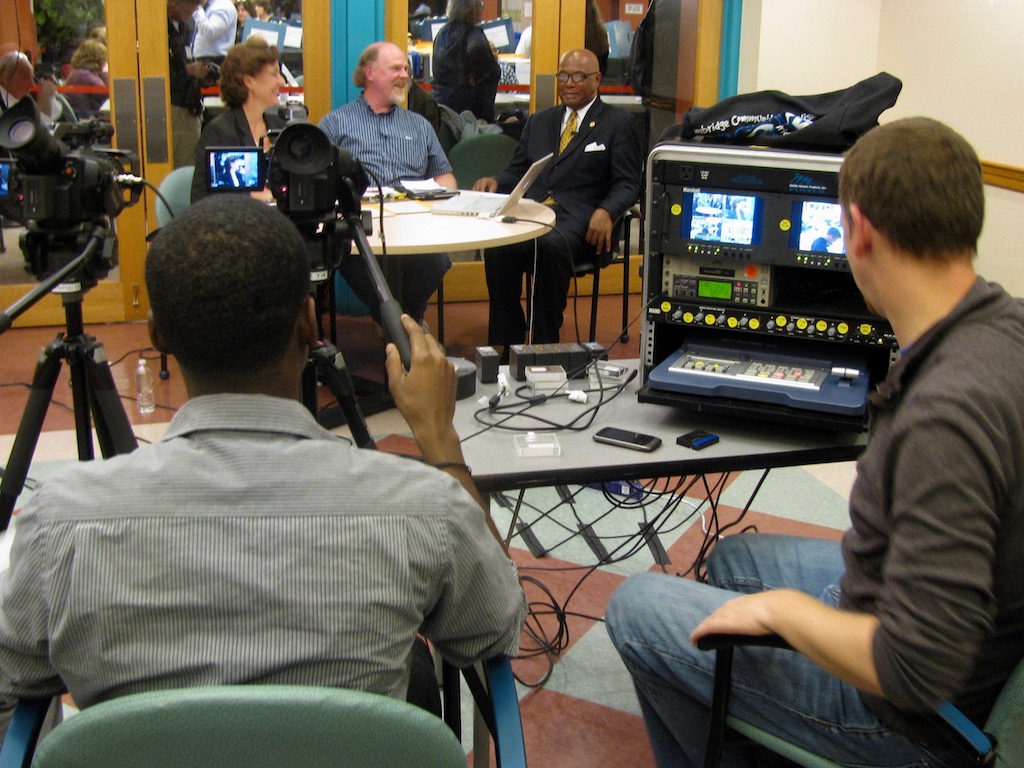 Among the work of Cambridge Commumity Television is municipal election coverage, with a remote feed from ballot counting in Central Sqaure serving a reported 58,000 people. (Photo: Marc Levy)

The city is moving toward merging Cambridge Community Television and 22-CityView as money dries up from Comcast cable television licensing fees.

For decades cable companies have put franchising fees back into their communities in the form of funding for public, educational and government access television channels, which are often referred to by the initialism PEG. But increasingly people are quitting cable, and a Republican-dominated Federal Communications Commission is allowing companies such as Comcast to change accounting methods and leaning toward letting them subtract what they provide their communities from fees – potentially down to zero dollars in Cambridge from around $1.5 million a year.

For 22-CityView and CCTV, where independent fundraising efforts have stepped up to more than a quarter of its budget, that would still mean a loss of more than $900,000 annually.

“That would devastate CCTV’s budget, unless the city steps in,” said Susan Fleischmann, executive director of the station, which has offices in Central Square where it offers classes in media and technology and produces programming for local cable channels 8, 9 and 96, as well as posting it online. 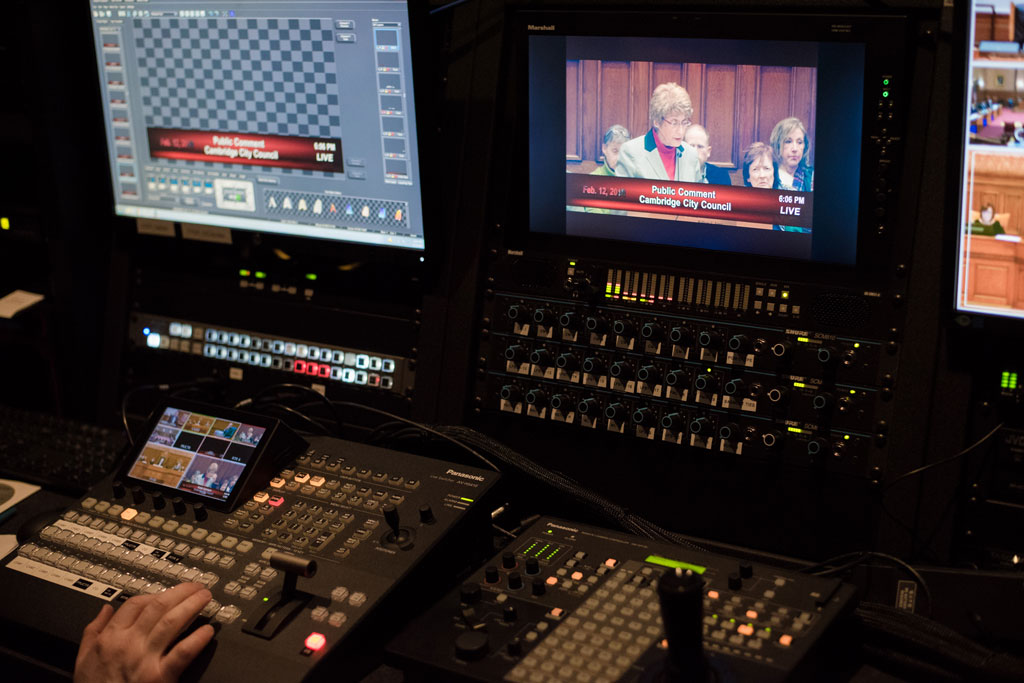 The 22-CityView channel has responsibility for broadcasting municipal meetings, such as for the City Council. (Photo: Ceilidh Yurenka)

The cable fees also go to 22-CityView, which serves basically as the city’s C-Span and operates out of offices across from the high school – which itself hosts the fee-funded Media Arts Studio, a digital media production facility for students’ Cambridge Educational Access Television and the Rindge School for Technical Arts Media Technology Program. Calvin Lindsay, director of 22-CityView, didn’t respond to a request for comment.

The current, 10-year licensing arrangement with Comcast ends June 30, 2021, but officials began around a year ago to look at what comes afterward, said Lee Gianetti, director of communications and community relations for the city. “I’m hoping that within three to four months we can start to have sort of a working agreement or framework,” he said. “It’s finally at a point where I think we’re talking about organizational structures and how it may be able to work.”

“We have been slowly but thoughtfully [talking] about how we might be able to merge community and government stations under one umbrella, because I don’t think anyone wants to lose some of the really important programming that’s happening,” Deputy City Manager Lisa Peterson told city councillors on Monday during a request for $120,000 for a consultant to help assess media needs and negotiate with Comcast.

“We don’t know exactly what that looks like, but I have to say it’s very much on everybody’s mind,” Peterson said of a station merger. “Some things with the FCC are happening faster than we thought.”

While Gianetti said it was “premature” to say there would be a merger of CCTV and 22-CityView, he also said he was “pretty confident that we’ll see closer collaborations between the three PEG channels and them looking to more efficiently utilize all their services, because it’s in all their best interests.”

“Negotiations with Comcast really have nothing to do with PEG reorganization. That’s just how we wind up using the money. If there were going to be cuts to revenues coming in, how we can best protect CCTV and sustain the services people want to have?” he said, noting the duplications likely to be found in equipment and staff services that could be streamlined over time through attrition. Changes in how people consume the news – more online, less on a television, for instance – could also affect funding.

“Any shift from fees, if you had to backfill it, is going to come from tax money,” he said. “So it’s how you really make the most of it.”

Peterson told councillors it was unlikely the city “will just make a recommendation to the council to fund 100 percent of what CCTV gets now.”

In the current city budget, the city’s cable television services – including five full-time employees – account for $1.7 million in expenditures, of which $251,390 comes from taxes.