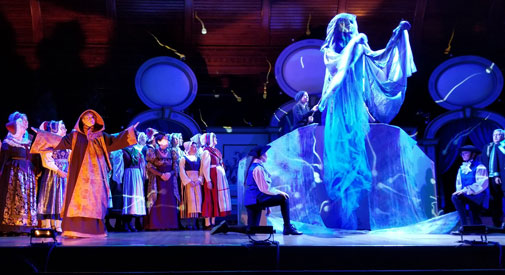 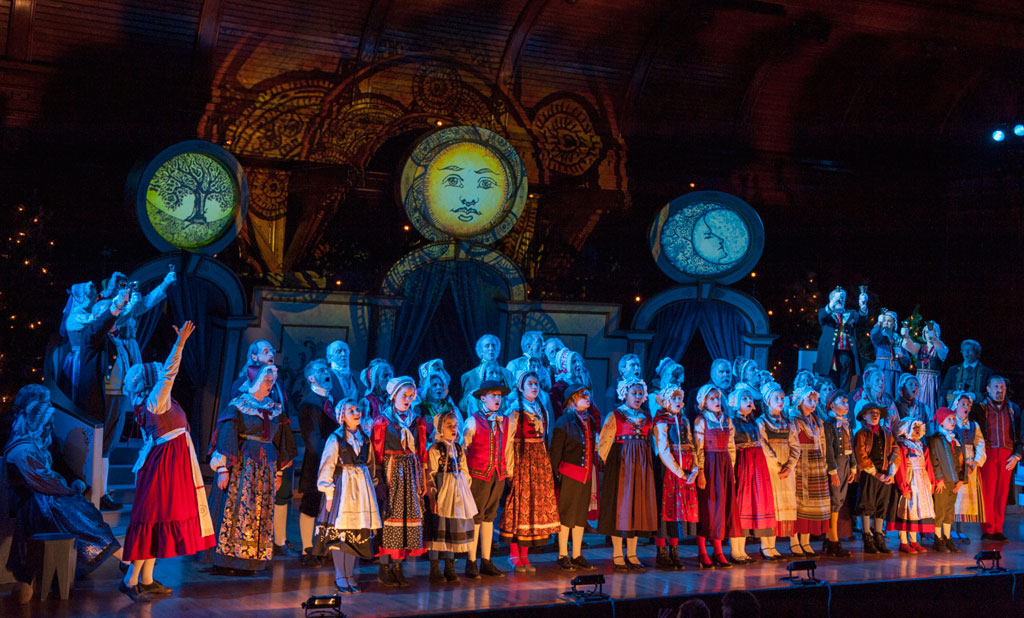 The Yuletide season is upon us once again, and for many theatergoers that means the annual viewing of holiday staples such as “It’s A Wonderful Life” or “A Christmas Carol.” To others, it means a trip to Sanders Theatre to see what land “The Christmas Revels” will transport them to. Each year Revels presents the stories, music and dance of different cultures, centered loosely on the Winter Solstice/Christmas season. This year it’s “A Nordic Celebration of the Winter Solstice,” which takes us to the Northlands – Denmark, Iceland, Finland, Norway and Sweden – for a taste of folk traditions of the other “Great White North,” along with the Revels’ perennial favorites. This production, running through the next week, shines as brightly as the Northern Lights on a dark winter night. 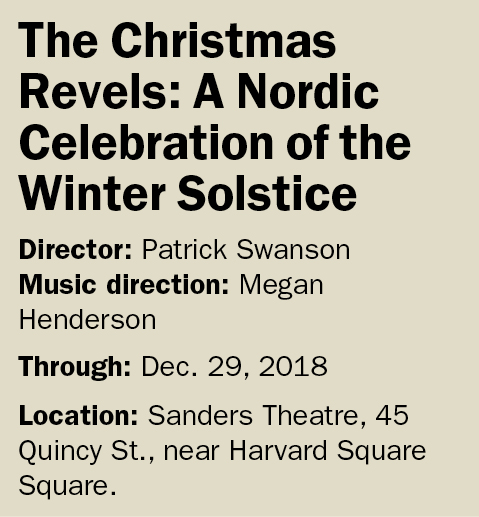 This 48th edition of “The Christmas Revels” is constructed loosely around a story adapted from segments of the Kalevala, the massively long narrative Finnish poem that helped to establish a national identity for the nation. In the Revels story, Sven (Ewan Swanson), a young teen boy, is not living up to his father’s expectations, and spends much of his time since the death of his beloved Uncle Väinö daydreaming. It’s Christmas Eve and the family is entertaining dignitaries from neighboring countries, and Sven is to recite a poem for the gathering. His father, (Matt Winberg), the Swedish ambassador, is not pleased with his performance, and decides to send him to boarding school to improve his focus.

Before he leaves, the kindly maid Anna (a delightful Sarah Morrisette) gives him a copy of the Kalevala, and places a ribbon with a key to an unknown lock around his neck. As he begins reading, Sven is conveyed to a magical dream world, where he encounters the magnificent Water Mother, dragons, serpents, witches – and his Uncle Väinö (the Will Ferrell-esque Chris Kandra), who guides him on his journey. This enchanting tale is interspersed with what the Revels does best year after year: take the songs and dance of a culture and, using its 80-plus member cast, interpret them for Boston audiences, usually with the help of some imported talent. This year, that contingent is led by Merja Soria, who interprets ancient Finnish songs in a kind of otherworldly voice while accompanying herself on the kantele (a string instrument), and the angel-voiced Swede Sunniva Brynnel, who also plays the accordion. 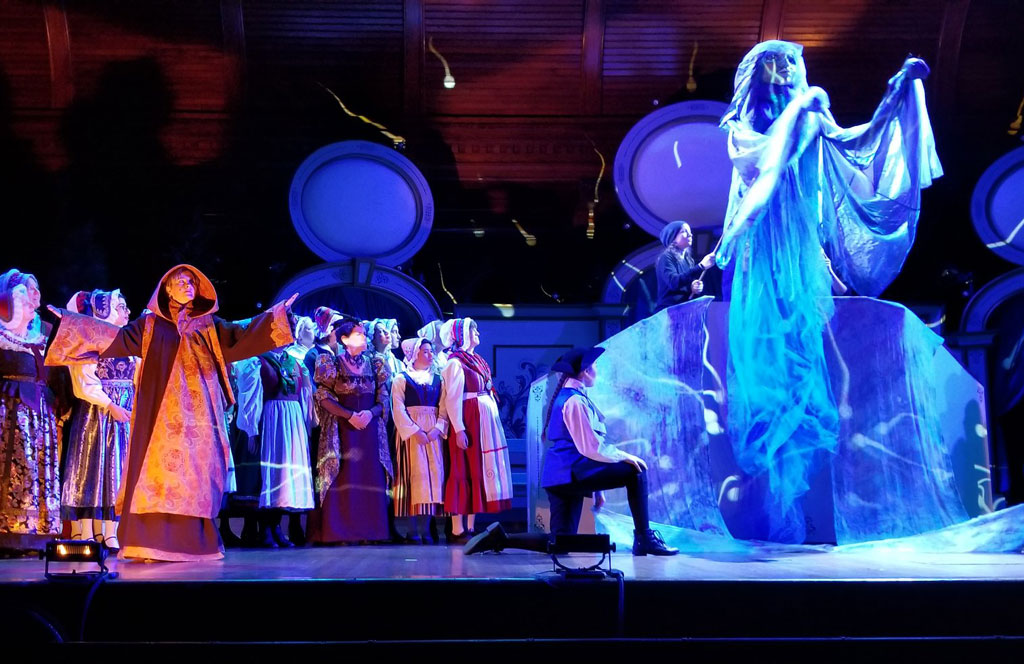 Longtime fans of the Revels know that no production would be complete without “Lord of the Dance,” the 1963 English hymn written by Sydney Carter. Led by charismatic baritone David Coffin, the entire audience sings and joins hands for a serpentine dance to close Act I that ends up in the spacious lobby at intermission. There’s also the “Abbots Bromley Horn Dance” – a mystical ritual performed by stags in the woods – which seems especially appropriate this year, if one imagines them as a kind of haunted reindeer native to the region; the intricate sword dance performed by the Pinewoods Morris Men; and the poem “The Shortest Day.” In addition, there are terrific versions of “Good King Wenceslas” and “Silent Night” (sung initially in Finnish by Soria) gorgeously performed by the cast, accompanied by the Cambridge Symphonic Brass Ensemble. There’s also the Mummers’ Play, another annual tradition, featuring the aforementioned actors plus the wonderful Welch-born actress Noni Lewis (who also plays Sven’s mother), in a comically twisted version of – what else? – “Hamlet,” complete with over-the-top death scenes. 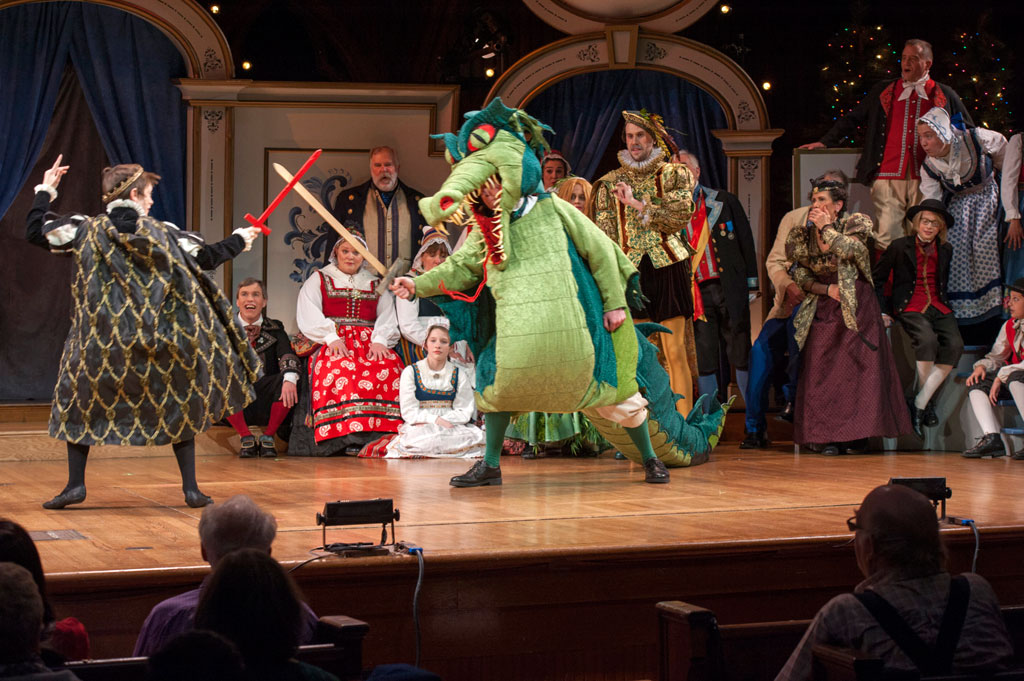 This year’s production is also noteworthy for the job done by its creative team –  set designer Jeremy Barnett; sound designer Bill Winn; and lighting designer Jeff Adelberg, as well as the mind-blowing attention to detail by costume designer Heidi A. Hermiller. Kudos also to puppeteer Mark Ward, whose gigantic Water Mother creation was a star in her own right. Another great aspect of this production is the incredible venue itself, the Sanders Theatre. Designed originally to host Harvard commencements and lectures, the venue has been host to myriad productions since 1895. It is acoustically perfect, and the architecture inside and out of the 1,166-seat theater is stunning. If you’ve never been to Christmas Revels, now would be the time. This is a terrific alternative entertainment for the holiday season.