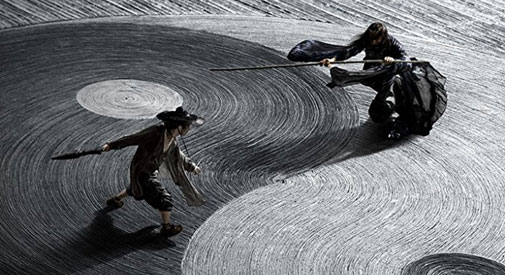 Before Chinese director Zhang Yimou got into wuxia-infused dynasty dramas (“House of Flying Daggers” and “Hero”) he wove provocative, intimate tales of personal struggle (“Raise the Red Lantern,” “The Story of Qui Ju” and “Not One Less”) that edged into the political (one, “To Live” was banned in China). In 2016, perhaps rattled by the ascent of Trump in American politics, he jumped the shark with the “The Great Wall” a cockamamie actioner with Matt Damon and Willem Dafoe checking in as Western avengers of sorts saving China from a horde of ravaging monsters. Yeah. The good news – and it’s relative, mind you – is that Zhang’s latest, “Shadow,” marks a return to form, even if the plot is something of writhing nest of snake to untangle. 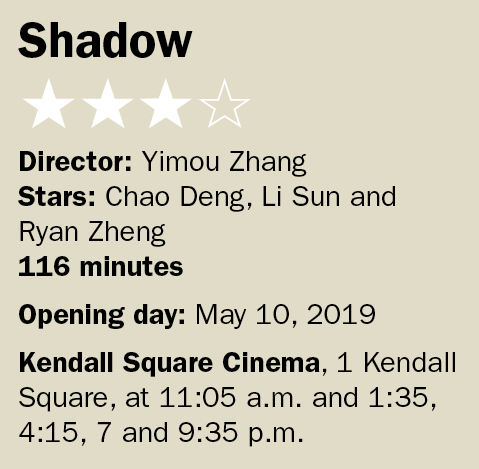 Somewhere in an ancient “great walled” country (clearly China, but fictitious, nonetheless) two clans remain at uneasy odds after ganging up to conquer a vying third. The Yan and Pei dynasties decide to settle who rules the lands by setting forth their best warrior in a winner-take-all contest. During that cage match the great legionary for the Pei, Zi Yu (Chao Deng) is wounded severely, but all the Yan take in victory is an impregnable mountainside city.

If that already feels like a lot to chew on, it’s just the backstory. In the now, the Pei king (Ryan Zheng, serving up a wonderful rendering of feverish instability) is something of a delusional fop who favors political appeasement by marrying off his sister (Xiaotong Guan) to the young Yan prince (Lei Wu). It’s an idea she despises, and with cause. To make matters more complicated (can they be?), there’s a more central thread about the Pei king and his “shadow,” a double named Jing Zhou (also played by Chao, pulling off the double duty with aplomb). That’s right, quicker than you can say Jean-Claude Van Damme or “Double Impact,” in a dank subterranean cave, the wounded warlord – slender, hobbled and disheveled, also with a dash of madness – trains his doppelgänger for a grudge match with the victorious Yan warrior. Then there’s the matter of Zi Yu’s wife, Madam (Li Sun) and the budding of a romantic triangle. More plots within plots.

It takes nearly half the film before Zhang delivers the anticipated hyperkinetic goods as the Pei, armed with razor-barbed umbrellas, literally slide into the Yan city and duke it out with their halberd-wielding rivals. What’s most noticeable throughout the film is the palette Zhang and cinematographer Xiaoding Zhao choose: Everything’s dank and drab, black or white or some washed out shade of gray – I’m not sure there’s ever an outside scene when it’s not raining – except for gratuitous spurts of crimson blood. Part of that choice is clearly thematic, most visually obvious when the two warriors fight atop a black and white, yin-yang symbol. The obvious representations of the forces of light and darkness are not, in this case, explicitly just good and evil, but more the nuanced contemplation of madness and corruption versus loyalty and a just rule.

Zhang has cited Kurosawa as major influence, and you can see it clearly on display in “Shadow.” It’s also got Shakespearean bones, but it’s no “Ran.” (Few films are.) While it’s better than an also-ran, the serpentining plots within might give you a touch of head spins before the gorgeous, grand spectacle of battle, dueling zithers and venomous final bow.