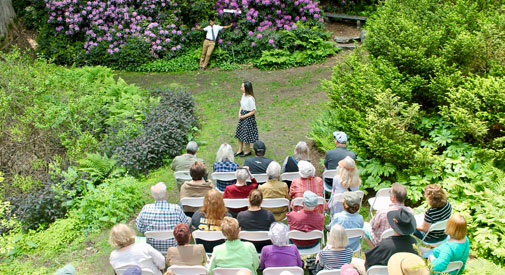 By Shelley A. Sackett 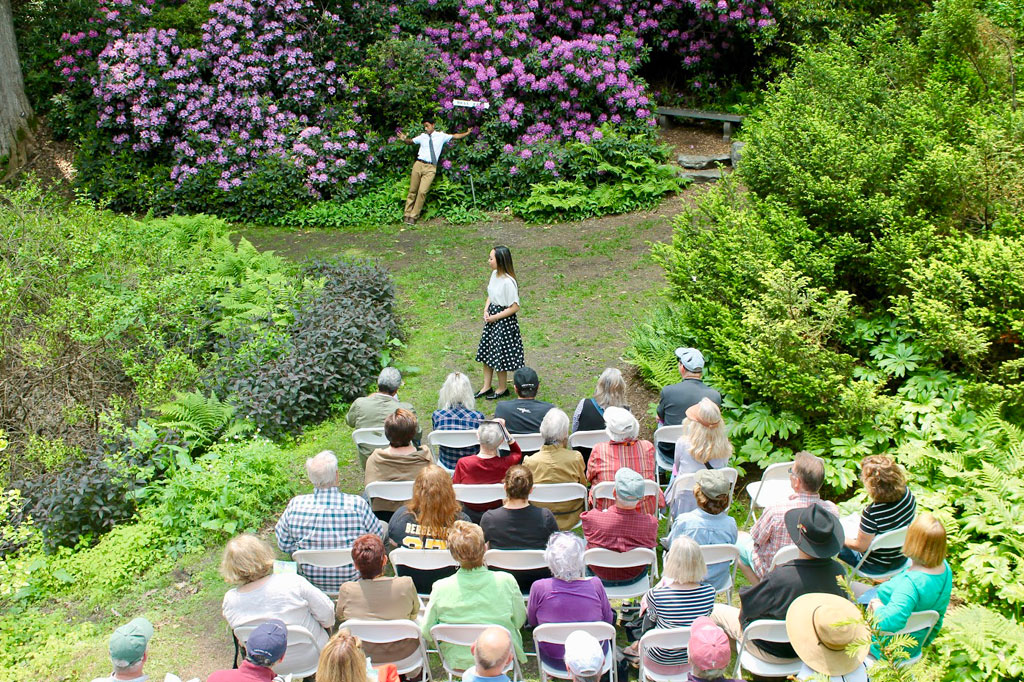 Mount Auburn Cemetery and its rich, natural environment is a heaven-made set for playwright Patrick Gabridge’s spectacular first set of five site-specific one-acts, “The Nature Plays.” Each 10-minute play touches on a topic germane to its setting in the 174-acre cemetery, which is also an arboretum and National Historic Landmark District. The plays run through June 9 with another series of five shorts, “The American Plays,” scheduled to run Sept./ 14-22.

Over the course of the 75-minute “Nature Plays,” the audience travels about a mile from site to site with the actors, wandering from pond to gravesite to secret mushroom trove to birding hot spot to sheltered glen. Chairs are set up at each site, and there is not a bad seat in the house.

Last Saturday at 5 p.m., the stroll through the parklike setting was as magical as the plays. Gabridge was on hand to offer bug spray and a brief introduction to the 35 people lucky enough to have scored tickets to the sold-out show. 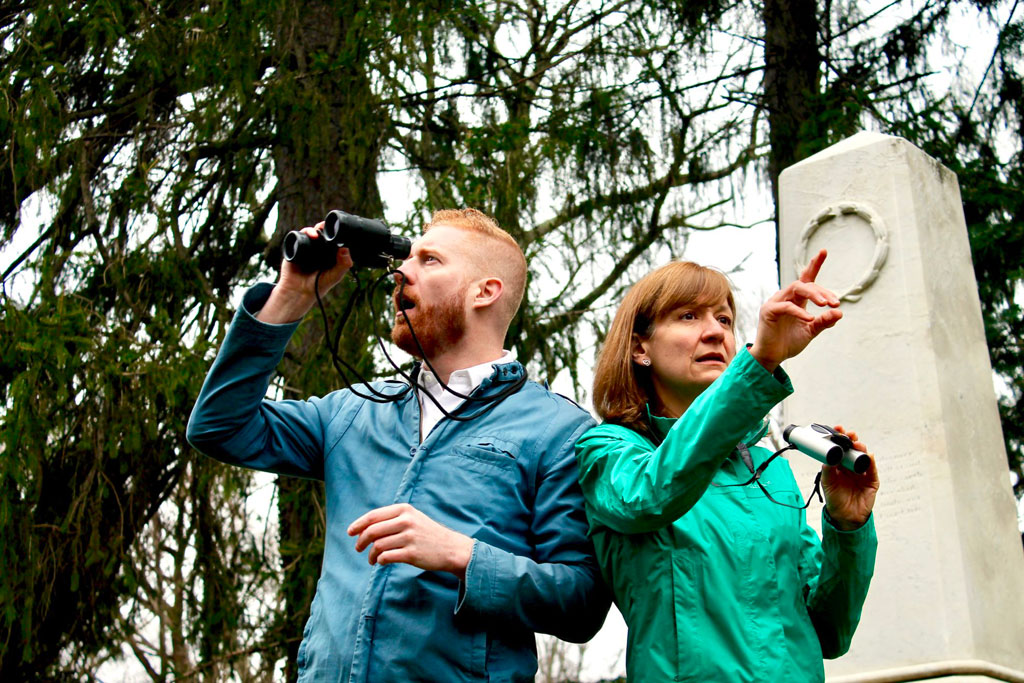 The five plays are: “Hot Love in the Moonlight,” about the strange mating habits of spotted salamanders (“but it’s also a play about choosing to have children in a dangerous world,” Gabridge said); “Namesakes,” which shows the 19th century naturalists Asa Gray and Louis Agassiz confronting the impermanence of their legacies; “Sworn to Secrecy,” a peek at the hidden world of mushroom hunters; “Love and Loss in the Glade,” a play about healing and loss told through the words of three trees; and “Cerulean Blue,” about the inner lives of bird watchers. (Along with a natural soundtrack of chirps and tweets, bird recordings of warblers, orioles and warbling vireos chime in during the bird-watching play.)

Gabridge, who is Mount Auburn Cemetery’s artist-in-residence, said he chose the topics based on “whatever interested him.” The results are stunning in their whimsicality, creativity, craftsmanship and depth, a seamless blend of big-picture topics such as global warming and the role the present plays in shaping history and legacy with slapstick and zingy one-liners.

Each play provides charm and a deeper message, and the actors – Lisa Tucker, Jacob Athyal, Ed Hoopman and Theresa Nguyen, directed by Courtney O’Connor – clearly revel in delivering their clever lines. “So much life in a place dedicated to the dead … I never expected to feel so much less lonely here,” one birdwatcher tells another.

Gabridge is an award-winning writer of historical and contemporary stage plays, novels, audio plays and screenplays. His short plays have been produced more than 1,000 times in theaters and schools in 14 countries, and appear in various anthologies. His recent site-specific works include “Blood on the Snow” and “Cato & Dolly” for The Bostonian Society/Old State House, and “Both/And: A Quantum Physics Play” for the MIT Museum.

In 2018, Gabridge launched Plays In Place, a new company that works in partnership with museums, historic sites and other cultural institutions to develop and produce site-specific theatrical plays and presentations to help engage, entertain and enlighten visitors in new and vibrant ways. Gabridge’s Mount Auburn plays are presented in partnership with Plays in Place as one of the company’s inaugural projects.

We caught up with Gabridge for an interview. 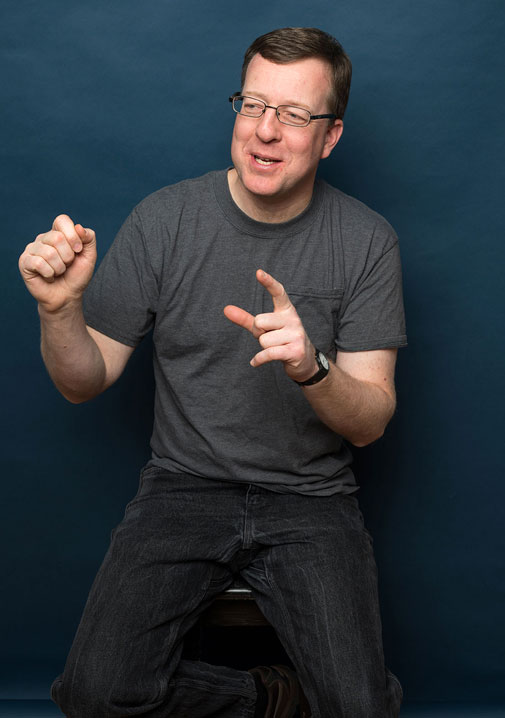 What initially inspired you to develop site-specific works?

I started creating site-specific plays in Colorado, in 1993. I had co-founded Chameleon Stage, with a bunch of other writers and a director friend, and we had no money, but wanted to experiment with creating new short plays. So we made plays for wild spaces in the mountains of Colorado, just west of Denver. It was called Theatre in the Wild. It was so much fun we did more of them, toured a tiny bit (to Aspen and Golden), and then did Asphalt Adventures, a set of parking lot plays. I learned a lot about creating and producing site-specific plays.

How did you decide on the topics for “The Nature Plays?”

One of the cool things about being artist-in-residence at Mount Auburn Cemetery is the freedom we get to choose what to create, and also the richness of the history and environment of the place. There are 100,000 people buried there, but it’s also a world-class arboretum, an important stop on the migratory bird pathway. It has lots of interesting wildlife and some very smart programs to get people involved with science and nature.

As I got to know the Cemetery, it quickly became apparent to me that I’d have to write about both history and nature. There was just so much to write about, so many different elements, that I decided to write two series of plays. And even then, “The Nature Plays” cover quite a bit of ground. The plays themselves also have different styles and takes on their subjects. I love the ability to experiment and play, and I think the audience is going to have a good time, too.

What are the challenges of working and performing in an outdoor environment? What are some of the rewards?

The hardest thing about outdoor work is unpredictability, especially around weather. We’re fortunate at Mount Auburn in that we have an indoor rain backup space, at Story Chapel. You also have a lot less control over passersby, random environmental noise, etc., that you don’t have to worry about in the controlled space of an indoor theatre.

However, the rewards are great. We get a vividly real, three-dimensional environment, better than any set we could ever create. In Mount Auburn, we get an incredibly beautiful venue in which to perform, and it comes with great spatial depth that we can use.

One thing I love about site-specific work like this is that it’s super intimate – often the audiences and performers are quite close. The formal barrier that exists between actors and audience in a traditional space is much more permeable, much less rigid. This enables more engagement, and I don’t necessarily mean the actors are talking to the audience, but there’s a sense of connection that’s deeper. This kind of experience often has great appeal for people who are less comfortable in a formal theater environment. There’s a sense of shared experience, even among the audience themselves, that creates a memorable and engaging event.

What do you hope audiences will take away from the experience?

I hope they’ll see Mount Auburn a little differently than they did before. That the specific spots where we perform will have a new resonance for them. I hope that they’ll be drawn to visit again, and when they do, they’ll look at the birds and trees and the place with a new curiosity, and also with a sense of belonging. They’ll know something about this place, and I hope they’ll feel like they’re a part of it, and it’s a part of them, in some small way.