‘Asako I & II’: She’s fallen in love all over again, and there’s something familiar about the man 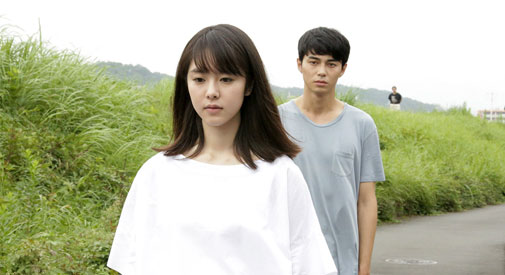 ‘Asako I & II’: She’s fallen in love all over again, and there’s something familiar about the man

Ryusuke Hamaguchi’s newest film, “Asako I & II,” asks patience – for the story to unfold, for a leading lady who makes nearly constant self-destructive missteps, for a conclusion offering two contradictory takes on the same outcome. Hamaguchi possesses an eye for engrossing human interaction built on minute details in friendships, a trait also seen in his five-hour debut “Happy Hour,” a staggeringly brazen debut for any filmmaker looking to capture an audience among attention spans shortened by the instant gratification of modern media. Broken up helpfully into three feature-length films on Amazon, “Happy Hour” is a meditative look into the lives of four women in their mid 30s that casts a hypnotic spell not through dazzling imagery (though a bus ride through the mountainside that starts the film is certainly luminous) but through repetition, confident filmmaking and smooth dialogue. 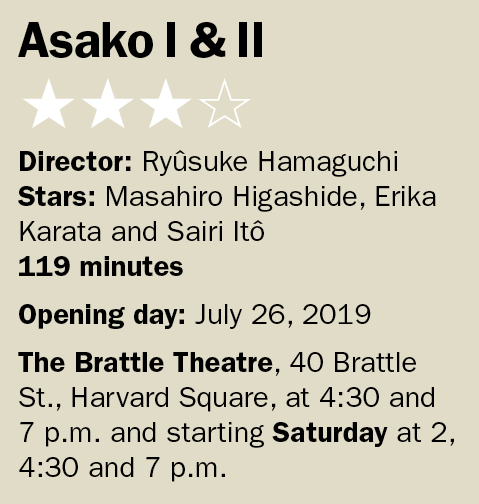 What aligns it so well with “Asako I & II,” a messier but more emotionally available picture, is the portrayal of close, long-term relationships – platonic and otherwise – and what it takes to keep them going.

The titular Asako (played by Erika Karata) falls in love with Baku, a drifter who soon disappears. Two years later, Asako falls in love with Ryôhei, who looks just like Baku. There’s a quiet devastation to this work of contradictions, driven by dream logic but deeply and painfully humanist, emotionally warm but visually vacant, with whites and grays that chew at the sides of the screen. Masahiro Higashide’s dual performance as Baku and Ryôhei brings sensitivity and kind eyes in one character and enigmatic detachment with the other – a dichotomy that sums up perfectly the tone of the film. It’s a film that asks us to judge at arm’s length, stringing us along until we’re caught up in a self-reflective, exploratory mind-trip. Hamaguchi brings forth our insecurities about relationships, past desires and half remembered dreams onscreen and asks the viewers to sort it out.

Hamaguchi’s “Happy Hour” also created hazy smokescreens with imposing length and light, fantastical elements, but neither film intends to distract from ruminations on the human condition and isolation versus our instinct to connect, and how those conflicting relationships lead to greater paths of self-discovery and humanity. Here it’s that first and new love is addictive, a theme surgically explored by Hamaguchi and his fellow scribe Sachiko Tanaka, and Asako isn’t so much a victim to an old flame’s manipulations as she is to her own youthful ignorance, chasing the euphoria of all-consuming love and passion without the rules, empathy and patience that come with longer relationships.

Asako is less reliable than the women of “Happy Hour” and purely reactionary for much of the film’s runtime, existing through a guarded curiosity and observing those who come in and out of her life with calculated silence. She’s selfish in love in a way that’s uncomfortably real, prone to actions that hurt those around her while never being overtly malicious. Her declarative and climatic actions are performed in moments of striking silence, sucking the air out of the room as she charges through the camera and out of the frame. But it is precisely the difficulty in empathizing with Asako and the film’s push to force audiences to confront the lesser and greedier versions of themselves that makes such a lasting impact.

What allows Asako’s characterization to soar is the performance Karata plays against. Higashide is a wonder of subtleties, sinking deep into the little moments that convince us Asako would fall for both men. Ryôhei is an earnest, deeply kindhearted man who takes in everything around him; as the enigmatic Baku he’s ruefully defiant, but warm enough so that when he reappears, we understand why Asako reconnects after being abandoned, and her her subsequent catastrophic actions. Higashide gives a beautiful performance, warm and unguarded and completely devoid of vainly performative tricks.

Both of Hamaguchi’s films are tremendous achievements, but “Asako I & II” deserves some extra love and will hopefully find fellow chorus members to sing its praises as it plays at The Brattle this weekend.