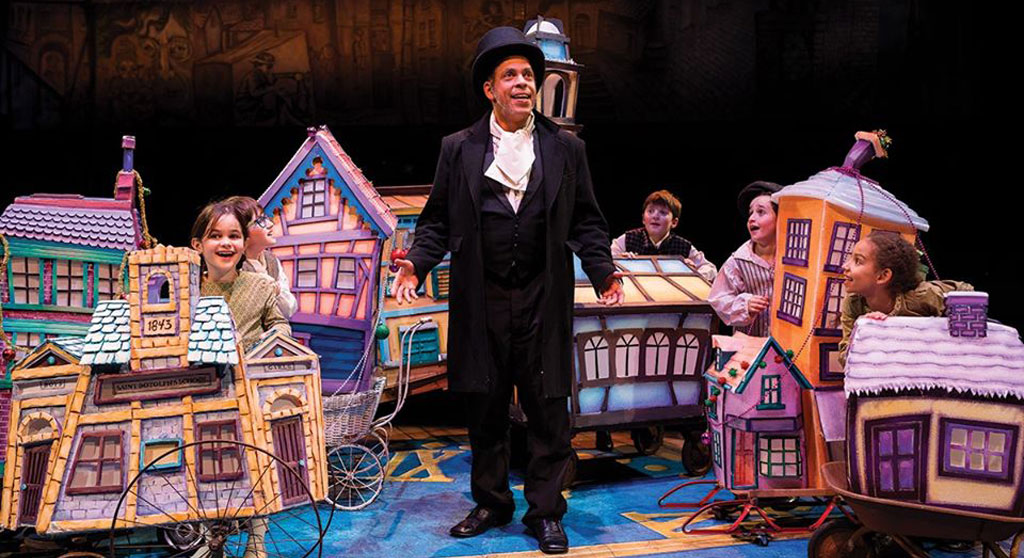 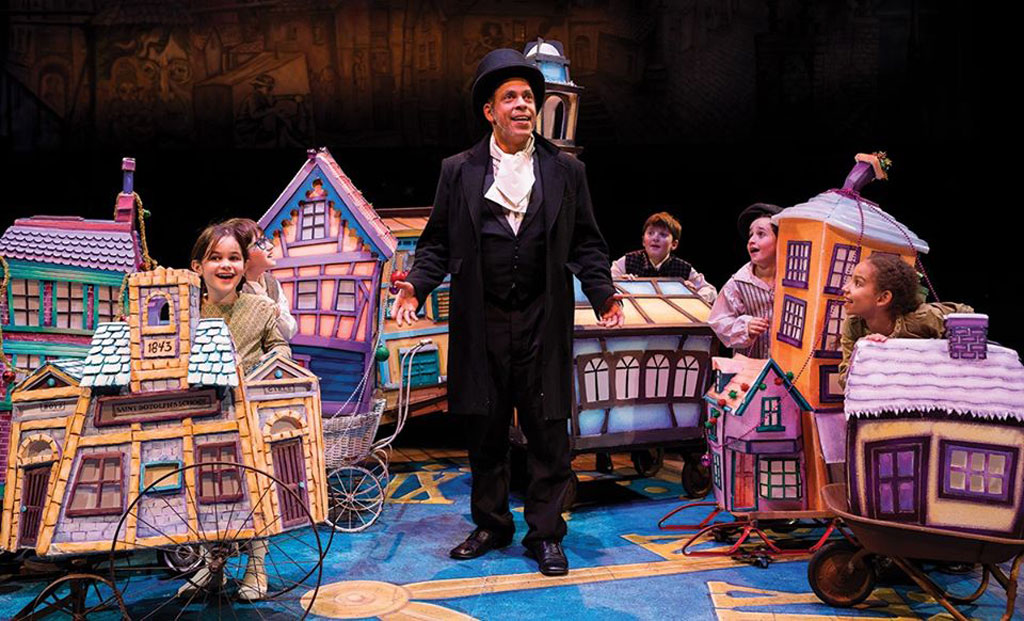 I suspect that there are some theater critics who approach the holiday season with a higher than usual sense of dread. But don’t we all have some degree of dread at this time of year? The sunsets arrive earlier, the cold weather streams in and all of the theaters whip out their annual holiday show for another go-around. The source of dread isn’t the prospect of watching these productions, which are often delightful; it’s the idea of trying to come up with something new to say about a show you’ve seen any number of times before and will see any number of times again. (For the record, this is my first time reviewing a production of “A Christmas Carol,” but seeing as I have no plans of checking out anytime soon, I know it’ll be far from the last.) Add that the sources for so many holiday theater shows are fairly well ingrained in our collective pop culture – when everyone goes in knowing the story, beats and even individual lines, just what is a critic supposed to critique?

I went to Central Square Theatre’s production of “A Christmas Carol” with a relatively low bar for it to clear. Thanksgiving was in the rearview mirror; the weather hadn’t yet turned wintry; and I was looking for something to jump-start my Christmas spirit. More than anything, I just wanted to have a good time. And damned if this production didn’t deliver. 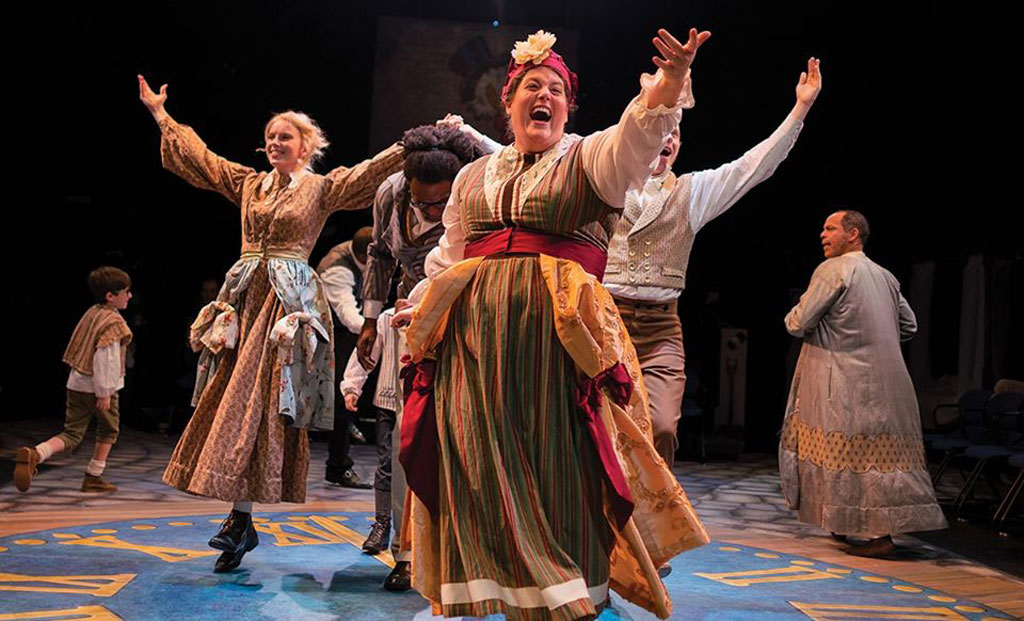 The 2019 “A Christmas Carol” is directed by Debra Wise with a sense of magic and fun.

It’s funny how art works on us on so many different levels. Sometimes our response isn’t so much to the art itself, but to the circumstances around it. I don’t think I can pinpoint a singular reason as to why I had such a strong emotional reaction to Central Square’s production, but the fact is that I spent much of the evening with tears welling up, both for what I was watching and for what I knew was coming. Part of this, I’m sure, has to do with a certain nostalgia button in my brain getting pressed; I used to work on a production of “A Christmas Carol,” and have fond memories. Maybe too, given the current state of the world, I just needed to be told a story based on the idea that human connection has value and even the worst among us have the potential for redemption. Who really knows? But at the center of all these things is Central Square’s production, helmed by adapter and director Debra Wise.

I’m not going to waste time with a description of the plot. As far as I can tell, the only way you could be unaware of “A Christmas Carol” is if every year of your life you’ve had the unfortunate habit of slipping into a coma from Thanksgiving to Jan. 1. Even if you’ve never read the original story by Charles Dickens or seen a stage version, odds are that you’ve caught multiple film versions (a quick review of Dickens’ IMDB page reveals a list of adaptations that seems to stretch on to infinity). Suffice to say that all of the major plot points for the tale of one Ebenezer Scrooge are here, as are many of the notably individual lines we associate with it (“Come in and know me better, man”). That means that we have to forfeit a certain amount of suspense when watching, but that’s okay. Central Square’s production isn’t any less for it; rather, it manages to dig in between to find where it can bring in something new.

There’s a wonderful kinetic quality to this production. It’s always moving, and always has a rhythm for you to jump in step to. You feel like you can reach out and get ahold of it. I think part of this comes from the fact that little attempt is made to hide the “magic” in the story: Travel is frequently depicted using puppets; when you hear background music, you can often see the actors playing the instruments just offstage; when Jacob Marley (James Ricardo Milord) makes his ghostly appearance, he does so surrounded by actors wheeling him around on a dolly. It’s part of what I think makes the play ideal for younger children. We’re not getting the story in the vein of a stuffy Masterpiece Theater classic. Instead, director Wise chooses to frame the telling of the story as an act of children’s play, which gives it a sense of fun. While the characters dash and bob between giant Day-Glo replicas of London houses, we’re allowed to bring in our imagination.

Wise also manages to give the production a sense of community, as if we’ve come together to tell the story. You can feel the shift in energy when you enter the theater – our actors are already mingling with the audience, telling fortunes, giving puppet shows and handing out balloons. This might seem like a gimmick, but it sets that communal tone that the rest of the production follows. Although the show might be set in Victorian England, there are tiny hints in the design that appear to be nudging us toward connecting Dickens’ tale of compassion and charity to the present day. A mural on one wall (the set design is by David Fichter, and it’s beautiful), depicts an image similar to a Banksy illustration with a shoe shiner working on the feet of an enormous Scrooge McDuck. On the opposite wall a mural features what looks like a homeless man holding a sign that reads “I want change.” We’re never bashed over the head with this (and thank god for that), but the clues are there for those who go looking.

Ah, but of course, any“Christmas Carol” production is going to hinge on its leading man. This is Ebenezer Scrooge’s story, and if we don’t believe in the arc from damnation to redemption, we might as well pack up and go home. Thankfully, Joshua Wolf Coleman gives a very fine performance that’s perfectly calibrated to the rest of the production. I’ve always been of the opinion (rather snobbishly, I might add) that for the story to have any impact, the actor playing Scrooge needs to dig into the nastier aspects of his character during the show’s first half. Coleman doesn’t quite do that. His pre-redemption Scrooge comes off as a few degrees gruffer than a stern father figure, but I think it’s the right choice for the tone of the show. Were he to lean in, it might overwhelm the production. In any case, he’s clearly having fun with the part and you can feel the joy radiating off him. The same could be said of the other actors in the cast who, in many cases, are pulling triple and quadruple duty, playing multiple characters over the course of the evening. Everyone seems to have collectively agreed to not overthink what they’re doing and just enjoy the moment.

All roads lead back to emotion. Given how many times I’ve seen “A Christmas Carol” in my life, perhaps it’s just a Pavlovian response, but the emotions it invokes are what has me so firmly in this production’s corner. I was moved. And when I left the theater, it was with a smile on my face. So, go. Enjoy. Embrace the wonder of it all.