‘What She Said: The Art of Pauline Kael’: Sweet kiss for film critic with acid tongue 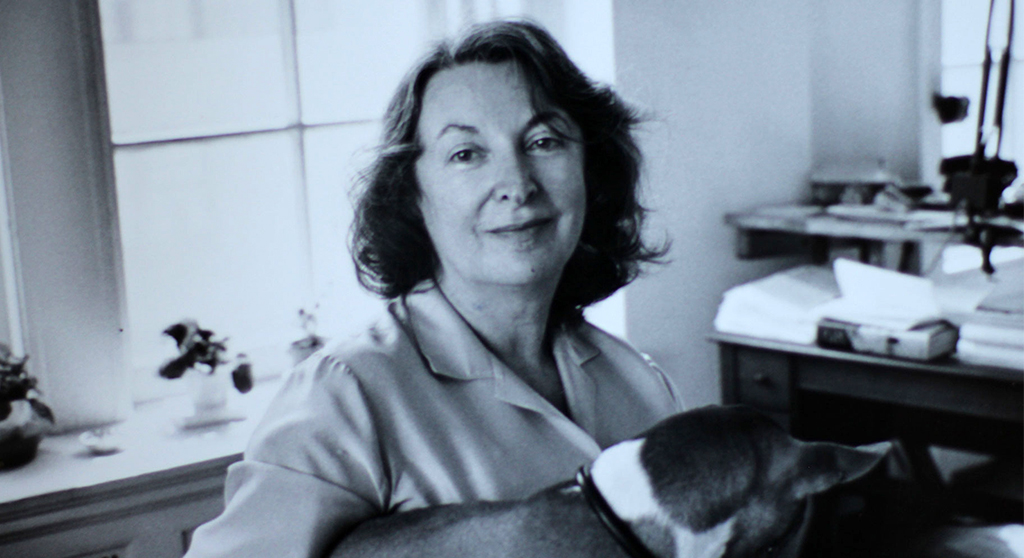 ‘What She Said: The Art of Pauline Kael’: Sweet kiss for film critic with acid tongue

Rob Garver’s hagiographic ode to the life and work of film critic Pauline Kael adequately covers the writer’s rise to her post at The New Yorker, her daunting (perhaps exaggerated?) influence on the film industry and her legions of A-list admirers. What distinguished Kael, besides being the lone woman in an all-male club when she got into film criticism back in the 1950s, were her uniquely punchy, eloquent and visceral reactions, many imparted in a single sentence. Kael also became famous for her embrace of graphic violence (she largely adored Scorsese, De Palma, Peckinpah and Coppola) and envelop-pushing erotica (“Last Tango in Paris”) while gouging away at sacred cows such as French New Wave icon “Hiroshima Mon Amour” and Christmas classic “The Sound of Music” (“the sugar-coated lie that people seem to want to eat”). 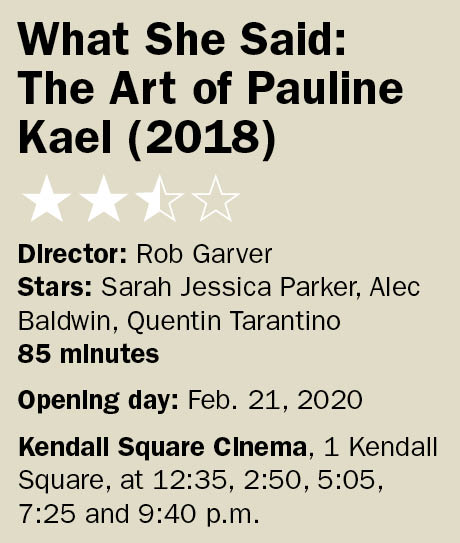 “What She Said: The Art of Pauline Kael” is framed with tape recording of Kael being interviewed by a young girl who gaily asks the critic her first movie (Chaplin) and later, her favorite film is (a detail I’ll let the moviegoer discover). Kael, who lived in Great Barrington and died just before 9/11, came from humble roots in Northern California, where she attended college at Berkeley. She never graduated, failed as a playwright in New York and her one marriage ended quickly, but throughout it all she maintained a deep passion for emotion-provoking narratives, be they bound by book jacket or cinematically projected. Her early reviews were on radio and for free, but being a single mother Kael looked to get paid for her labor; before landing at The New Yorker she was at McCall’s, which ended badly.

Film clips spruce up the narrative, sometimes to echo Kael’s thoughts and other times simply as illustrating the film being trumpeted or impaled. We get Kael’s personal reflections from letters and other scrawlings read by Sarah Jessica Parker in voice only, evoking a smooth, husky Hollywood starlet persona that feels warmly congruent with the actual Kael we hear at the bookends, and in interview clips with Dick Cavett and other TV talk show hosts of the era. Plenty of celebrities lend their talking heads to the project, most prominently screenwriter/director Robert Towne (“Chinatown”), Alec Baldwin and film-nerd-turned-auteur Quentin Tarantino.

The great David Lean allegedly stop making films for almost a decade after Kael eviscerated “Ryan’s Daughter” in 1970 (Lean would make only one more feature, “A Passage to India” in 1984). And while most critics trashed Arthur Penn’s “Bonnie and Clyde” when it came out in 1967, it possessed all the goods to garner Kael’s eye – balletic violence and strange sexual arrangements. Her embrace of the bloody crime drama, as Garver has it, diverted the film from imminent demise and transformed it into an instant classic (nominated for four Oscars, including Best Picture). “What She Said” also presents the critic as a major curator of the 1960s to early 1980s American New Wave, crediting her with launching the career of Martin Scorsese after heralding “Mean Streets” in 1973 and advising Francis Ford Coppola as he was trying to get “Apocalypse Now” off the ground in the late 1970s.

Garver’s film recounts Kael’s foray into Hollywood (taking a brief departure from The New Yorker) to work with Warren Beatty on a few projects. She had a small hand in James Toback’s forgettable “Love and Money” (1981) and David Lynch’s “The Elephant Man” (1980). Of the many critics who knew Kael from the beat, David Edelstein air kisses the vicious turf war Kael had with Andrew Sarris of The Village Voice (better covered by Cantabrigian filmmaker Gerry Peary’s 2009 love letter to film criticism, “For the Love of Movies”).

Garver, who could double as the head of Kael’s fan club, makes clear that people were intoxicated by Kael’s unabashed style and opinions, with takedowns that were often humorous (she called Chaplin’s “Limelight,” “Slimelight”) or controversial (she called “Shoah” exhausting and was hit for being anti-Semitic, even though she was Jewish). Marlene Dietrich in Paris once pleaded for copies of The New Yorker to be sent so she would know what to go see. Garver does include some balance, noting Renata Adler’s infamous essay lambasting Kael in 1980 (the two were colleagues at The New Yorker), but skips over allegations of plagiarism and ethical overstepping in her quest to influence filmmakers. Film critic-turned-filmmaker Paul Schrader (“Taxi Driver,” “Cat People”), who was close to Kael on both sides of the cinematic aisle, sums it all up with a nod and wink: “In the end, what Pauline Kael promoted wasn’t film. It was her.”

“What She Said” may not be the most tightly composed bio-doc, but it is a near must-see for cinephiles and fans of Kael’s impressive career. Younger generations at the onset of their love affair with film might just find wonder and awe in an era of art and journalism that thrived before the Internet.