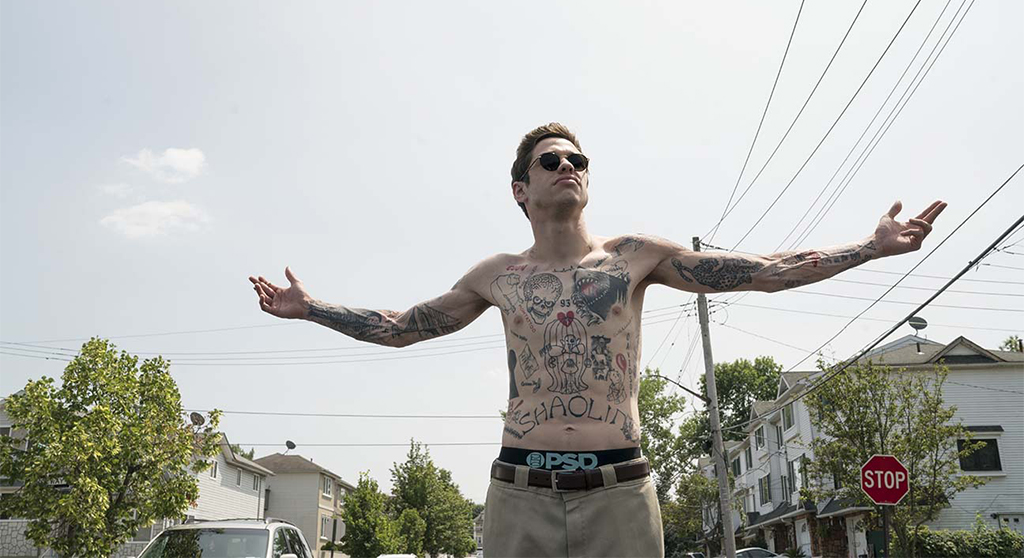 Funny guy filmmaker Judd Apatow directs funny guy Pete Davidson is “The King of Staten Island,” a semi-autobiographical account of arrested development on the urban isle of the film’s title. Apatow, known for punchy comedic hits such as “The 40-Year-Old Virgin” (2005) and “Knocked Up” (2007), and Davidson, whose wide-eyed edginess shines on “Saturday Night Live,” dial up one long “finding yourself” dramedy (almost two and a half hours) that’s unfortunately a tad slight on the laughs and way too long on the melodrama.

Davidson plays a version of himself as Scott, a 24-year-old tattoo artist living with mom (Marisa Tomei) and in a friends-with-benefits relationship with his sister’s best friend, Claire (Bel Powley). He won’t be seen in public with her and she wants something more – but slack, stunted dudes always think they have more in their hands than they do. Mostly Scott hangs out with a posse of the similarly rudderless (Ricky Velez, Lou Wilson and Moises Arias) who get high, complain about their stagnant situations with passive zeal and occasionally crack a funny joke. Then one day Scott offers to give a 9-year-old kid named Harold (Luke David Blumm) a tat. The kid taps out at the first squiggle of ink and later that day shows up with his dad (Bill Burr), who wants Scott or his mom to pay for the removal or he’ll call the cops.

Turns out Burr’s Ray is a firefighter (with a “big thick [fill in the blank]” as we’re told by his ex) who knew Scott’s father – a firefighter who died in the line of duty on 911 – and starts to date Scott’s mom. There’s a lot of relationship turns in “The King of Staten Island,” which becomes tedious after the umpteenth miscommunication and overreaction. Davidson’s not as razor like or effective as he is in his short jabs on SNL. Tomei and Burr, however, are quite excellent. Tomei, vulnerable and warm while digging in her heels, and Burr, casting shadows of John Voigt’s macho prison escapee in “Runaway Train,” is affable and complex beyond the script. Powley, so amazing in “The Diary of a Teenage Girl,” also doesn’t get a lot to work with, but you notice her when she’s onscreen. Apatow’s daughter Maude plays Scott’s antagonistic sister, and real-life firefighter turned “Reservoir Dogs” actor Steve Buscemi plays one of the hose draggers down at Ray’s station.