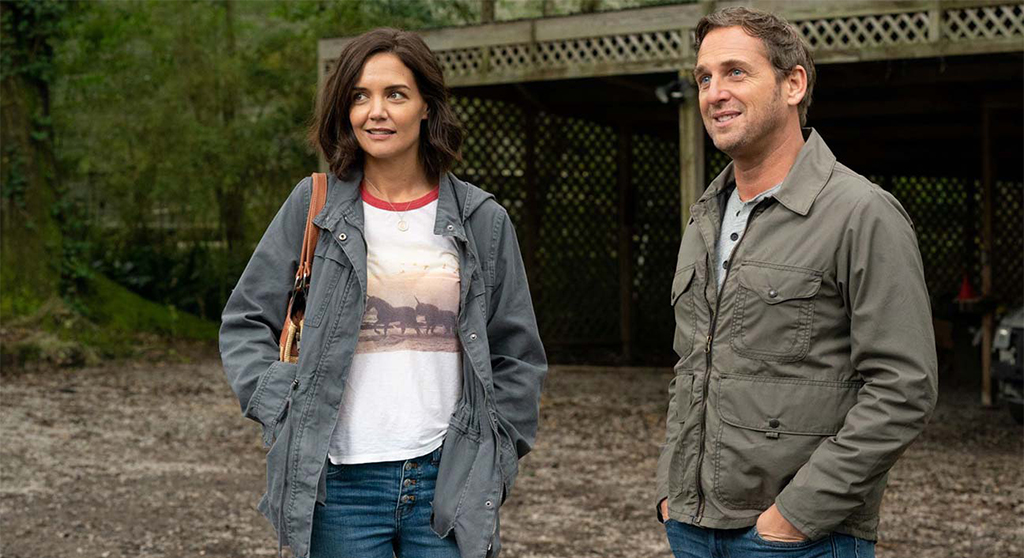 “The Secret: Dare to Dream” is a pretty hokey title that implies a meaningful life lesson served up with a hefty side of sentimental platitude. You get one of the two, and while it might sound like a Nicholas Sparks adaptation (“The Notebook,” “Nights in Rodanthe,” “Message in a Bottle”) it’s not – it’s based on a book by Rhonda Byrne, who also serves as a producer on the film.

So what’s the big secret? Well, Miranda (Katie Holmes) something of a fishmonger/restaurant manager, is an overtaxed widow with a brood at home to feed and care for. It hasn’t been too long since her husband passed (car accident), but now, newly out of the throes of grief there’s something starting to kindle with Tucker (Jerry O’Donnell from “Stand By Me”) the owner of the restaurant. Pretty clean hometown stuff, until one day when arguing with her texting daughter in the passenger seat, Miranda rear-ends a pickup truck so big and fierce it looks like an official Nascar vehicle. Bray (Josh Lucas), the owner of said monster truck, turns out to be a pretty decent guy. He offers to fix minivan’s bumper for Miranda and, after a huge coastal storm hits and rips a giant hole in her aged roof, he swings by and tells her not to worry – he’s got it. From there, anytime something goes wrong, Mr. Nice Guy shows up as if on speed dial. It’s cool happenstance at first, but then Bray’s new-agey, power-of-positive-thinking thing starts to get a bit creepy and there’s that one nagging thing he keeps wanting to tell Miranda, but never quite gets around to doing so. And of course Tucker’s not having any of this coincidentally there-all-the-time BS.

You can probably guess where it all goes – or close enough. The twists aren’t all that surprising or life affirming, but “Dare to Dream” is reasonably well acted and directed (by Andy Tennant, who did “Hitch” and “Anna and the King’). It’s a weepy where, if the production values and star power were just a notch lower, it would have landed on the Hallmark Channel; as it is with the pandemic upon us and theaters closed, it’s a sizzling summer release.