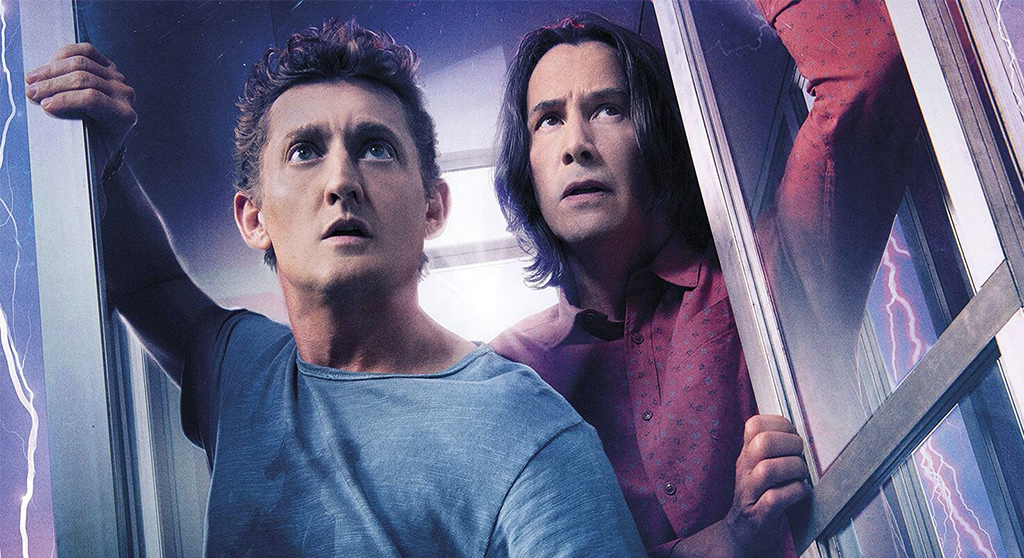 As AMC and other theaters begin to slowly reopen (none in Camberville except for Landmark’s Kendall Square Cinemas, which opened stealthily Friday) studios are hedging their bets by releasing in theaters and on streaming platforms. “Mulan” is coming to you next week from Disney for nearly $30 plus the cost of a Disney+ subscription, and if that feels eye-popping, consider that you can show it to the whole family. In this racket we normally have press screenings in a theater or the studio sends us a screening link, but for “Bill & Ted Face the Music” I missed the boat and so went the path we all must go, shelling out $20 to rent the third installment of this dude-ly trilogy.

Written by the original’s screenwriters, Chris Matheson and Ed Solomon, and directed by Dean Parisot (“Galaxy Quest’’), time has not been all that kind to Bill Preston (Alex Winter) and Ted “Theodore’’ Logan (Keanu Reeves). They married and have daughters, but their dreams of being big-time rock stars have fallen by the wayside. Something of an abandoned strip mall overgrown with weeds, is how one might describe it after drinking in their performance at a wedding party. So how do the lads – er, dads – get back into the time-hopping phone booth? Someone called The Great Leader (Holland Taylor) in the future sends back her daughter (Kristen Schaal) to give them a wakeup call, and for good measure, there’s a freaky ’bot (Anthony Carrigan) who’s something of a cross between the Terminator and Tin Man. The quest this time around is to come up with the one song that can unite the planet – a quest that would seem like a platitude if it were not for the time – and ultimately save the universe. Dave Grohl of the Foo Fighters, Jimi Hendrix (DazMann Still) and Louis Armstrong (Jeremiah Craft) work their way into the plot, but the best is when Bill and Ted run into past and future versions of themselves, with the best being the version of themselves inside a prison yard. The wives (Erinn Hayes and Jayma Mays) are off in their own phone booth on their own adventure (the couples therapy scene is droll and hilarious) as are the daughters, Billie (Brigette Lundy-Paine) and Thea (Samara Weaving). George Carlin makes a digital appearance and the ageless William Sadler is back as the Grim Reaper. Yes, a trip to Hell is mandatory.

Is seeing the first two chapters – “Bill & Ted’s Excellent Adventure (1989) and “Bill & Ted’s Bogus Journey” (1991) – a requirement? No, “Face the Music” works on its own well enough, with just a few references and gags that may be lost without the homework. Reeves and Winters do an effective job of remaining excitably dude-ish while being dad-ly. The nice revelation here are Lundy-Paine and Weaving as the dudes’ daughters; in mannerism and inflection, even style and attire, they’re chips off the old block. You can tell they’ve watched the two prior episodes forward and back ad infinitum. If this is the end of the dudes’ run, you can see them picking up the reins and having their own dudette adventures. As for paying $20 (you can own it for $25) it’s a coin toss for me as a solo watcher. Now, if I was doing a series watchathon with family or friends, and enjoying a beer or two? Most Excellent!