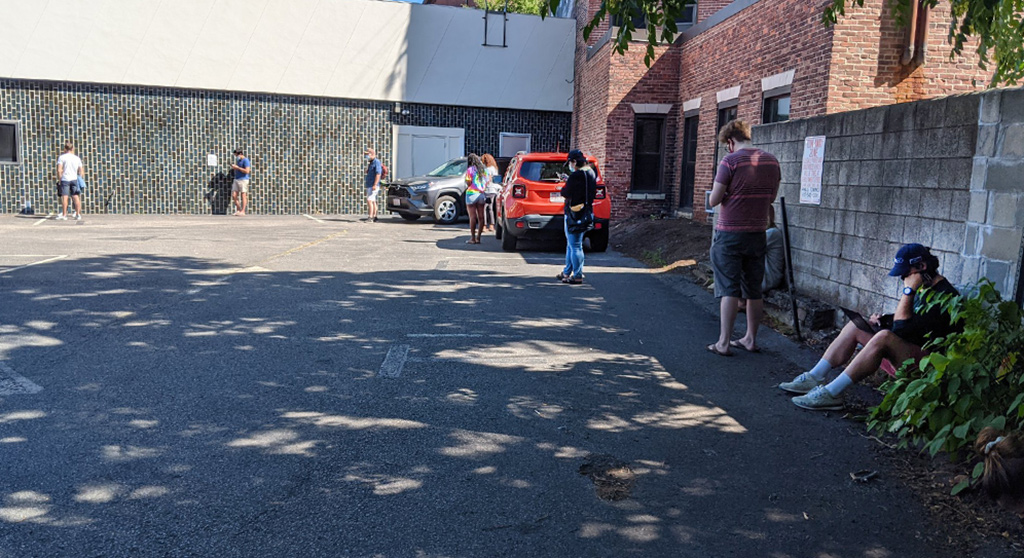 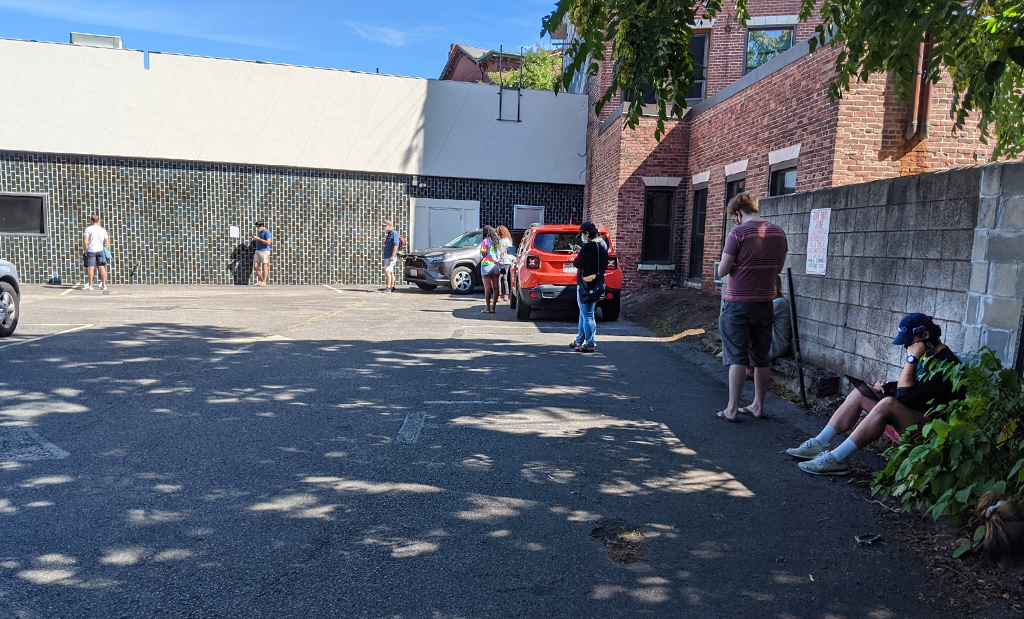 People recounted waiting for as much as three hours for an antigen test Monday at an Inman Square CareWell Urgent Care clinic. (Photo: Kaaashif via Twitter)

Cambridge will keep accepting any resident who wants a Covid-19 test despite changed federal guidance discouraging people with no symptoms from getting tested even if they were exposed to someone with the virus, city spokesman Lee Gianetti said Monday. The city is also continuing its free testing program into September.

“The city’s approach to testing has not changed, and we continue to follow Massachusetts Department of Public Health guidance for Covid-19 testing,” Gianetti said in an email. “We maintain that anyone who wants to get tested should get tested, and people who have come into contact with someone who tests positive for Covid-19 should most certainly get tested.”

The U.S. Centers for Disease Control and Prevention alarmed many public health experts when it said Aug. 24 that asymptomatic people who had been near someone confirmed or suspected of being infected didn’t necessarily need a test; previously the agency had recommended testing. After a backlash, the agency retreated partially, saying testing could be “considered” for those without symptoms who had been exposed to the virus.

The city’s Public Health Department began offering free Covid-19 tests to residents in June, around the time the Cambridge Health Alliance shut its own East Cambridge mobile test site because of low demand, the Alliance said. CHA now offers tests to residents of Cambridge, Somerville and other communities in its service area at a location in Somerville’s Assembly Square.

Far from declining, demand for testing, at least in Cambridge, has stayed high. The city now releases appointment slots for tests at three neighborhood sites every week that usually fill within a few days. The city will publish its next weekly schedule after Labor Day.

CareWell Urgent Care clinics offer $160 antigen testing for people not showing coronavirus symptoms, advertising results in as little as 15 minutes (some Reddit comments say they can take longer, and that not everyone gets result before they leave). The clinic takes walk-in customers only, which can cause long waits. On Monday, a Twitter user going by Kaaashif recounted his three hours in a long line snaking around the block from Carewell into an Inman Square parking while awaiting an antigen test. It was a last resort when, he said, the first test the city could offer was Sept. 10.

“What’s the point?” he wondered of a test so many days away, when reached by phone. “A lot of travel is done with no pre-planning, so it’s not like I could call CHA two weeks in advance.”

He saw families coming to wait in line with their children for hours, and “some people left the queue because they couldn’t take it any more,” he said, though the reason for the wait was something of a mystery: The test itself takes a minute, and payment took about five. His test came back negative, he said.

“I understand there a lot of moving parts, but this is September, and the city knew people were coming back into town. Six months later, we’re still in the situation we were in in March,” he said.

On Saturday the city said it has provided more than 8,000 Covid-19 tests, including more than 4,000 in July and August. Earlier in the pandemic Cambridge tested hundreds of nursing home and assisted living residents and staff, residents of senior public housing developments and homeless people in targeted programs. It was not clear whether those figures were included in the 8,000 total.

Meanwhile, Harvard University and the Massachusetts Institute of Technology have begun testing students and others on campus as often as three times a week to prevent outbreaks as their campuses reopen. Those testing programs promise to dwarf the city’s effort. In four days two weeks ago MIT conducted 6,598 tests; three were positive. By Aug. 27 the total number of tests had swelled to 16,065 with only 10 positive.

Harvard and MIT are posting test numbers and results on their websites. The city has not said if or how it will account for testing and results on campus. It appears that few if any positive cases are being reported on the city’s daily Covid-19 dashboard. The state Department of Public Health provides Covid-19 data on residents to Cambridge and other communities; it said it will consider college students as residents of the community where they attend school unless there is other information.

The city’s Covid-19 dashboard reported wildly erroneous figures Saturday for the gender and age group of people with confirmed and probable cases, although the total number was correct. For example, the number of women dropped to 178 on Saturday from 705 on Friday; men to 101 from 550; and the number whose gender was said to be unknown to 1,005 from 27. The total for people 19 and under disappeared, decreasing to zero on Saturday from 30 on Friday; the number of people in their 20s went down to four from 258.

Apparently the city was alerted to the errors by a reporter; its daily emailed update on Saturday evening did not link to any data, and a statement said “staff are working to resolve an issue with the data feed for the Cambridge Covid-19 Data Center.”

The issue was with the data feed from the health department, which was “resolved” over the weekend, spokeswoman Susan Feinberg said Monday.

Many tests for coronavirus reveal few cases among university students; City counts none