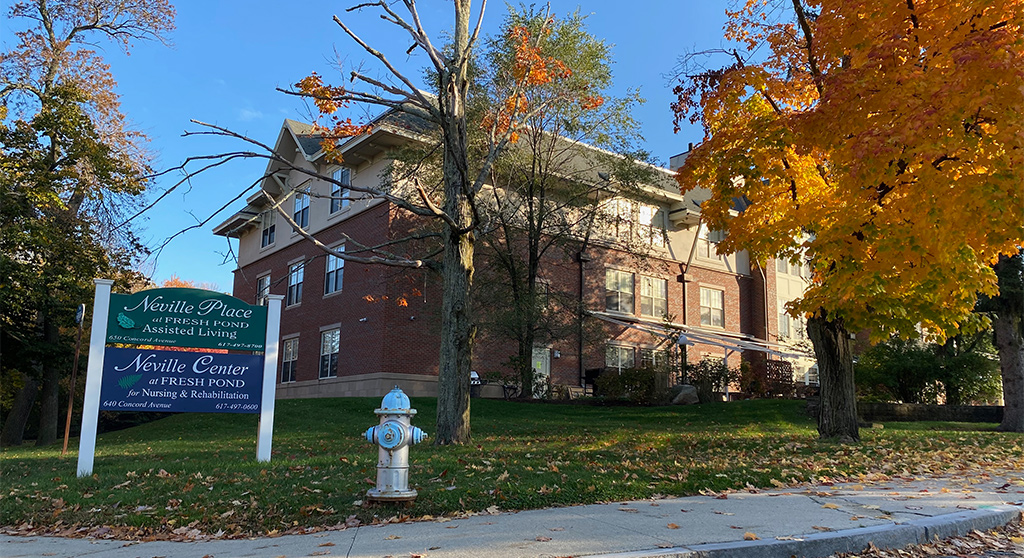 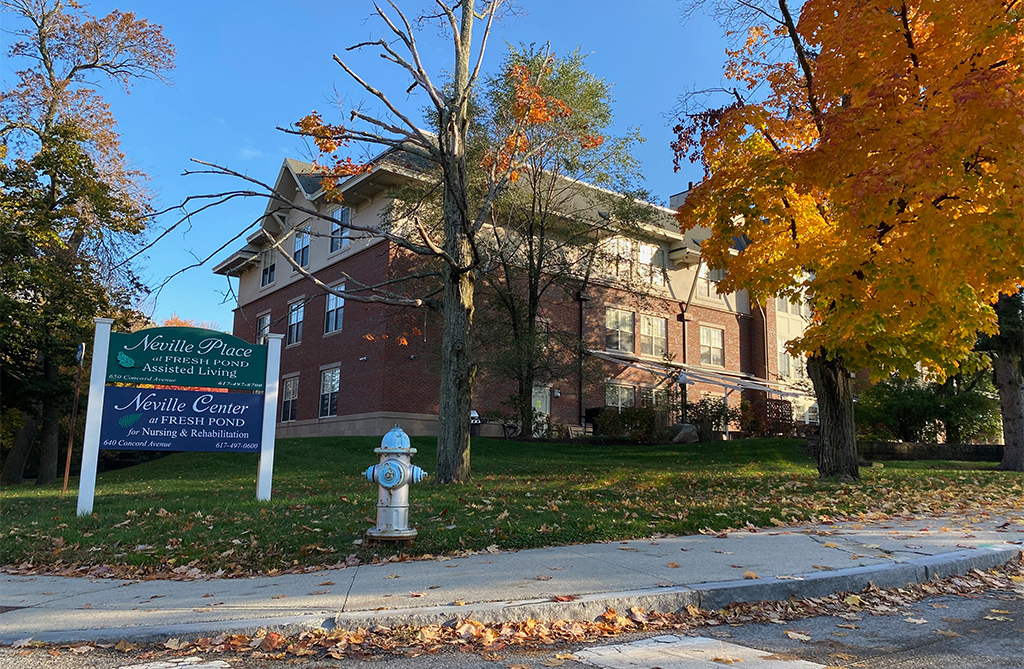 Neville Center at Fresh Pond has been transparent about coronavirus infections at the facility. (Photo: Marc Levy)

A day after the city health department announced that a second Cambridge nursing home had a resident infected recently with Covid-19, it withdrew that finding Thursday after learning from the state health department that the person had tested negative “several times” in addition to the positive test result. The resident also had an “alternative diagnosis that has symptoms similar to Covid,” said Kristin Ward, the department’s performance management and quality improvement specialist.

Earlier Thursday, the nursing home, Neville Center at Fresh Pond, said the resident was originally diagnosed with Covid-19 back in April and had recovered. Although there are reports that some patients have been infected twice, that is extremely rare and some experts question it. Neville Center also said the resident had tested negative in a retest of the recent result.

The recent positive test came while the resident was hospitalized for “a procedure,” Neville Center said. Angela Penny, spokeswoman for the management company running Neville Center, Landmark Management Solutions, identified the hospital as Cambridge Health Alliance. Ward, of the public health department, said all the recent tests, positive and negative, came while the resident was in the hospital.

The reversal still leaves a spate of new nursing home cases after four months when there were no new infections at any of the city’s three nursing homes and four assisted living facilities. Seven residents and an employee have tested positive since Oct. 2. The cases were at a nursing home that the city did not identify but which state reports showed is Sancta Maria Nursing Facility. The city also did not name Neville Center; it was the nursing home that disclosed the new case and, on Thursday, the negative test result. Neville Center is the only long-term care facility in Cambridge that has been transparent about Covid-19 cases among its residents.

Penny said: “We truly believe in transparency and want to keep our families informed, as that is the only way to prevent misinformation and fear. We will continue to daily update our website and communicate with our families, residents, staff and the community.”

Nursing home residents are extremely vulnerable to the virus because of their age and poor health. Almost three-quarters of the 100 Cambridge residents who have died of Covid-19 were in long-term care facilities. 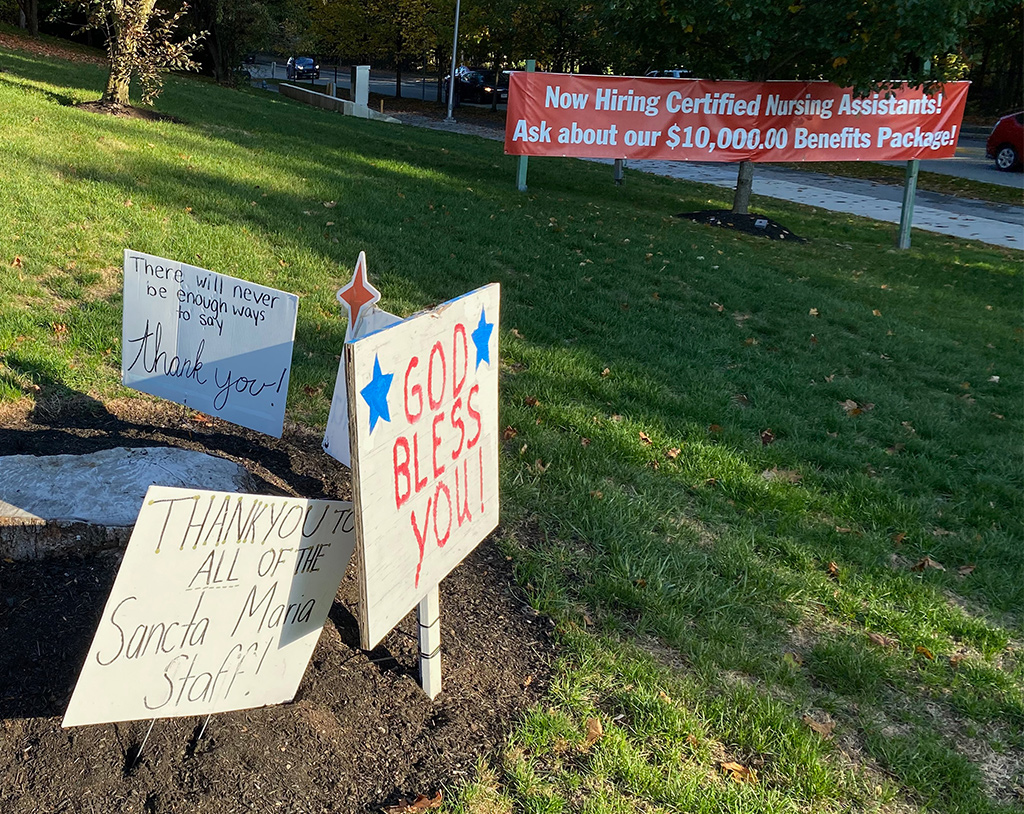 The Sancta Maria Nursing Facility has signs on Concord Avenue on Wednesday advertising that it is hiring. (Photo: Marc Levy)

The Cambridge Public Health Department had linked the cases at both nursing homes to hospitals, saying at least some residents were infected while they were being treated at hospitals and brought the virus to the local facilities when they were discharged.

Although the Cambridge Health Department said the first three new cases at Sancta Maria were patients infected in hospitals, the department changed its opinion after it identified four more cases. Then it said that “it is likely” that infections also spread “in the isolation unit” – though isolation is supposed to prevent transmission.

Sancta Maria was testing all residents after its new cases and was supposed to test 90 percent of staff every week. But Sancta Maria has failed to meet the staff testing requirements for the second week in a row, testing 75 percent instead of the required 90 percent, the state health department reported Wednesday. Sancta Maria also reported to the Centers for Disease Control and Prevention on Oct. 15 that it lacked enough nurses and aides earlier this month; that was the most recent report.

The city has not named the hospitals where residents might have been infected. Spokeswoman Susan Feinberg directed questions to the state Department of Public Health, which is investigating, the city said. Omar Cabrera, spokesman for the state agency, didn’t respond to questions.

The only nearby hospital where an outbreak has been reported is Brigham and Women’s Hospital. “We checked with our infectious control team and they are not aware of any link between the Brigham cluster and a Cambridge nursing home,” spokeswoman M. Elaine St. Peter said.

Residents being admitted to a nursing home, whether for the first time or because they’re coming back from a hospital stay, must stay in quarantine or isolation for 14 days and be tested. Nursing homes have also admitted hospital patients who are known to have Covid-19 and need rehabilitation or help recovering.

Cambridge Rehabilitation & Nursing Center and Sancta Maria Nursing Facility have said in reports to the CDC that they’ve taken hospital patients with known Covid-19; the most recent admissions were in July, according to the reports. There is no data for Neville Center.

Neville Center has ties to city government, the Cambridge Health Alliance and the Cambridge Housing Authority. City Manager Louis A. DePasquale sits on its board, and the other agencies also have board members as representatives. The nursing home and the Neville Place assisted living center were developed on the site of the former city-owned nursing home, Neville Manor, with the help of the city and the housing authority. The new facilities must accept a certain percentage of low-income residents under the terms of the redevelopment.

Representatives of the housing authority and the Alliance have said they and the city don’t oversee daily operation of the two long-term care facilities. The nursing home is managed by Landmark, and the assisted living center by Senior Living Residences.

This post was updated Oct. 22, 2020, with the news of a reported infection being false.