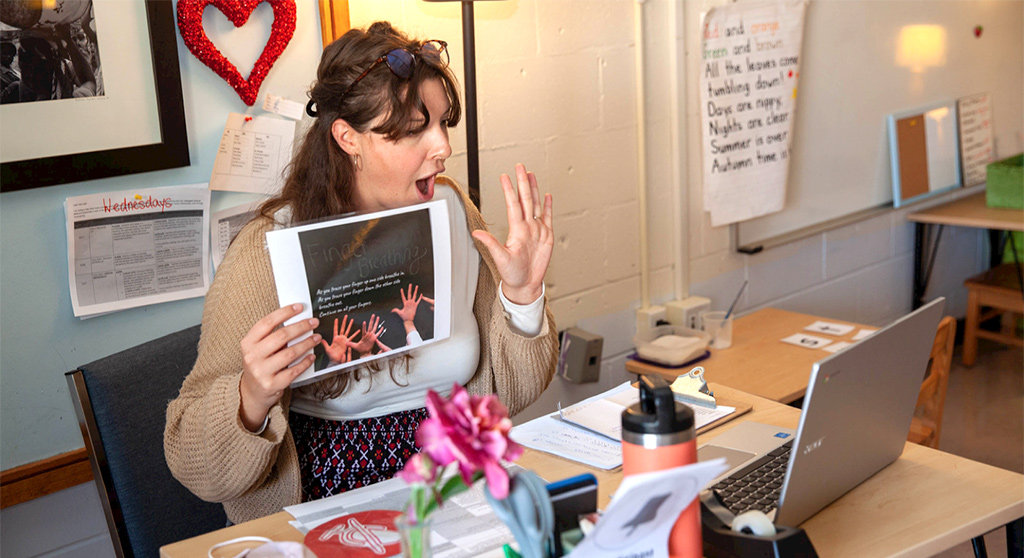 A Cambridge Public Schools teacher leads a remote lesson in an image released by the district.

Parents have taken 402 students out of Cambridge Public Schools this year, making for the first decline in districtwide enrollment since the 2006-2007 academic year and ending 13 consecutive years of enrollment growth, district officials said last week. It’s a 5.6 percent drop; before the coronavirus pandemic, enrollment had been projected to increase by approximately 2.5 percent.

“We’re doing pretty well in the schools … school’s a safe place to be,” Mayor Sumbul Siddiqui said in discussing the figures revealed during a Tuesday roundtable with elementary school principals. There have been about 1,600 Covid tests completed, 28 of which were for students showing symptoms of infection – but none have come back positive, she said on the Friday episode of her podcast with vice mayor Alanna Mallon, “Women Are Here.”

Most grades are still learning remotely. It’s currently junior kindergarteners through first graders getting in-person education four days a week; about half of second- and third-graders attend in person; and special-needs students. “Optimally we would be getting a lot of our learners back into school,” Mallon said.

Despite the smaller number of students, enough teachers have opted out that it has caused a scramble to fill their positions. Mallon noted that at the Peabody School in North Cambridge, interim principal Patricia Beggy has been filling 19 positions – a number she would have filled in five years as principal at the Morse School in Cambridgeport. It’s been difficult to hire so late in the year, said Chad Leith, the Morse School’s current principal.

Mallon said she would be interested to know more about the differences among campuses, “because it feels like some schools have more students that have left than others.”

School officials said Tuesday that they had to remind teachers it was okay to keep classroom air scrubbers on lower settings, instead of keeping them turned up so high it can be hard to hear. The district is searching for ways to bring back more, older students when colder weather makes it hard to learn outdoors; using gymnasiums was mentioned Tuesday, and Siddiqui wondered about using space at restaurants that succeeded in getting heat lamps for the comfort of customers sitting outside.