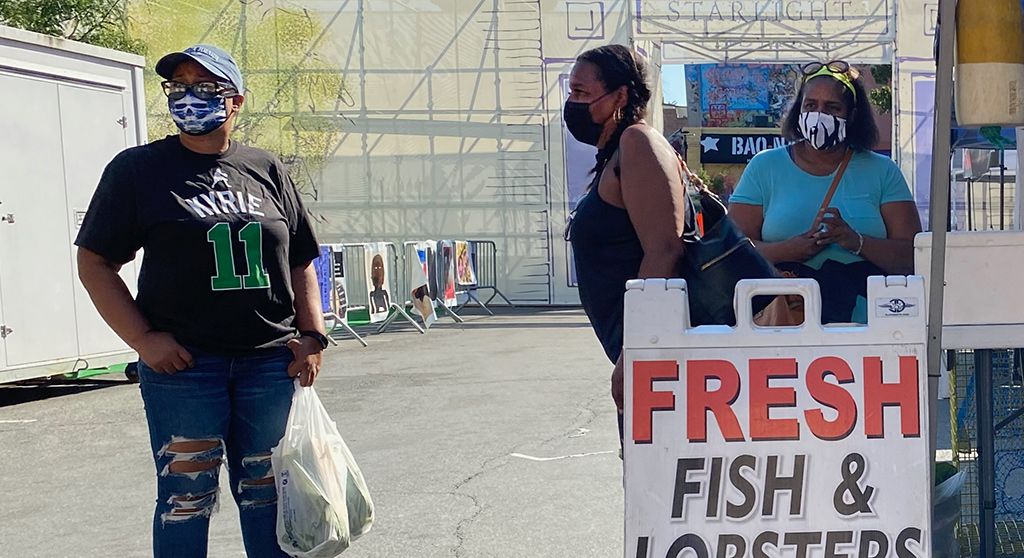 Three shoppers wait for seafood in August at a farmers market in Starlight Square on the edge of The Port neighborhood. (Photo: Marc Levy)

Months after the city identified three neighborhood “hot spots” with high Covid-19 infection rates and placed testing sites in those areas, officials have promised for the first time to mount a targeted campaign to tell neighborhood residents of the testing opportunities.

Similarly, months after the city started posting daily reports showing that black and Latino residents were more likely than whites to get the virus – in line with state and national patterns – it appears officials are trying to find out whether there are also disparities in testing.

The pledge of targeted communication about testing to residents of the hardest-hit neighborhoods – East Cambridge, North Cambridge and The Port and Wellington-Harrington – came only after four city councillors, including the mayor and vice mayor, made a strong push for it at a City Council meeting Monday. Relying on the city’s website “really doesn’t reach everyone. We know that,” councillor Marc McGovern said.

At first, answering vice mayor Alanna Mallon, chief public health officer Claude Jacob said the city “could look into [distributing] cards” in the affected neighborhoods. But after McGovern took up the mantle and advocated handing out leaflets door to door the way city councillors campaign for election, City Manager Louis A. DePasquale stepped in more forcefully. “We’ll work on that this week and get more out to the neighborhood soon,” DePasquale told councillors.

Later, Mayor Sumbul Siddiqui, who grew up in subsidized housing in North Cambridge, suggested that the city work with the Cambridge Housing Authority and tenants’ groups to get the word out. Councillor E. Denise Simmons, who has repeatedly asked city officials to do more to reduce the infection rate among black and Latino residents, with little response, said she is “really troubled about the fact that the numbers are not coming down in The Port, Wellington-Harrington, East Cambridge. Particularly The Port.”

She demanded a written action plan “about how you will reach out to families and how – how you will quantify who has actually been tested.  If we’re not that specific, we’re not going to change it.

“I want to know how many people in Newtowne Court have taken advantage of this testing that is in their backyard. If they are not doing it, then we need to figure out why they are not and encourage them,” Simmons said, referring to Pisani Center testing site between the Newtowne Court and Washington Elms public housing developments.

Researchers have found racial disparities in testing. One report in September, from the Kaiser Family Foundation, cited a study based on electronic medical records for 50 million patients that showed that black, Latino and Asian patients were tested at about the same rate as white patients although they were more likely to test positive for the first time when they were already much sicker. The study suggested a reason: less access to testing. And it said people of color might suffer worse outcomes than white people because of the later diagnosis.

Until now, city officials have responded to any doubts by expressing pride in the city’s robust testing program. They have not answered questions about who is getting tested, including how many individuals have received at least one test versus the total number of tests, which includes repeat testing. After repeated requests from Cambridge Day for demographic information such as race about those getting free city tests, health department spokeswoman Kristin Ward said the city does ask residents making appointments for the information but couldn’t track that data in total because it’s recorded “one result record at a time.”

“We are working with [city testing partner] the Broad Institute to make this kind of data analysis possible in the near future so we can assess the reach of the testing program,” Ward said.

The state Department of Public Health reports demographic information about those tested statewide every day, but it’s missing for a substantial proportion of tests. In addition, adding up the daily reports could be misleading because they will include repeat testing. Other reports posted by the state health agency show that the overwhelming majority of tests are repeat tests.