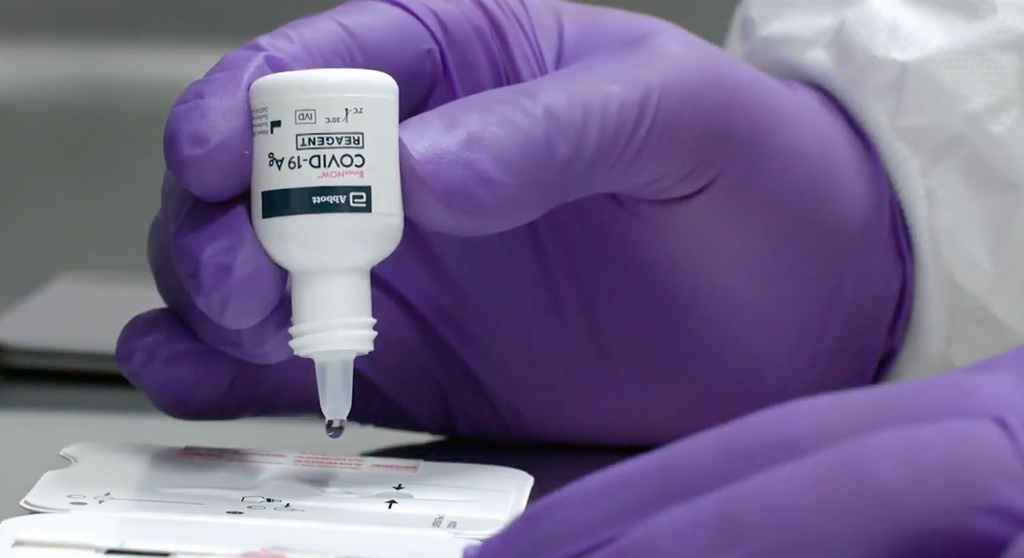 A BinaxNow test for coronavirus is demonstrated in this screen capture from an August news report from WGN.

Responding to the surge in Covid-19 cases, the state is offering up to 2 million coronavirus rapid test kits to nursing homes to test visitors and symptomatic residents and workers. Each facility could get kits equaling as many as four times its total number of beds every month, according to a Massachusetts Department of Public Health notice to nursing homes on Monday.

At the same time, state regulators sharply strengthened testing requirements for nursing home staff, mandating weekly tests for all. Before the requirement went into effect Thanksgiving day, a facility could test as few as 50 percent of staff every two weeks if transmission in its area was relatively low and there hadn’t been new cases of the virus in the nursing home in the past two weeks. All three Cambridge nursing homes appeared to be on the least rigorous schedule before the new requirement took effect.

The changes came as the executive director of the state group representing the long-term care industry, the Massachusetts Senior Care Association, said Monday in a memo that cases in long-term care facilities had doubled in the past week and urged members to maintain vigilance.

Executive director Tara DiGregorio said infection control deficiencies cited by state inspectors were also rising, led by improper use of protective equipment and handwashing lapses. One Cambridge nursing home, Sancta Maria, has had deficiencies on its two most recent infection control inspections, though they are not in the most serious category, according to the state’s weekly Covid-19 report Friday.

Vice mayor Alanna Mallon has pushed city health officials to increase testing of nursing home workers. She got a tepid response when she advocated for more testing at Monday’s City Council meeting, with chief public health officer Claude Jacob saying it would be considered. He did not mention the change in state requirements, announced the same day as the meeting.

Two Cambridge nursing homes and one assisted living facility have reported cases of the virus in workers in the past two months, with the most recent case or cases at Neville Place assisted living, according to a daily report posted on the state health department website Nov. 17. A spokeswoman for the management company for the assisted living center didn’t respond to an email. A range of one to four cases was reported; the state says it doesn’t specify when there are fewer than five cases for privacy reasons.

The state health department doesn’t regulate assisted living centers, so it can only recommend that they conduct weekly tests. It’s not known how often the four Cambridge assisted living facilities have been testing their staff.

The rapid test kits, Abbot’s BinaxNow, don’t require equipment and return results in 15 minutes. They identify coronavirus antigens – proteins that make up the virus. Some studies have shown they are more likely to report false negative results than is the most common and accurate coronavirus test, PCR, which looks for the virus itself and usually requires samples to be analyzed in a lab.

Accuracy of the test

The state health department ran its own study of the accuracy of the BinaxNow test by offering the rapid test and the PCR test to about 1,600 people, including 233 children, at a drive-through testing site – apparently at Lawrence General Hospital – as part of the state’s Stop the Spread free testing program. When results were compared, the rapid test results were more than 95 percent accurate in symptomatic adults for positive and negative tests within a week of symptoms. For children with recent symptoms, positive results were 100 percent accurate; negative ones were about 78 percent accurate.

The test was less accurate for those without symptoms, although positive test results were close to 100 percent correct in adults and children. Negative results for adults without symptoms were 70 percent accurate, and for children, 63 percent. Further analysis showed that the BinaxNow test was more accurate as the amount of the virus in a sample increased. Proponents of the test say it correctly identifies people most likely to be infectious, which reduces transmission and benefits public health.

The state health department is ordering nursing homes to use the rapid test only for workers and residents who have coronavirus symptoms and to confirm results with a PCR test. Nursing homes can offer the test to nursing home visitors, but cannot require them to take it. Low environmental temperatures, below 40 degrees, make the test less accurate, so the state requires nursing homes to record the temperature when a worker administers the test.

The three Cambridge nursing homes, Sancta Maria Nursing Facility, Neville Center and Cambridge Rehabilitation & Nursing Center, have also received an unknown quantity of rapid test kits from the federal government. Two of the facilities, Sancta Maria and Cambridge Rehabilitation, haven’t used the tests, according to data they submitted to the Centers for Disease Control and Prevention. The CDC hasn’t posted data from Neville Center because of quality problems; the nursing home says it’s been trying to clear up the problem.