‘Another Round’: Four stifled schoolteachers plunge into alcohol as a lifestyle, sink or swim 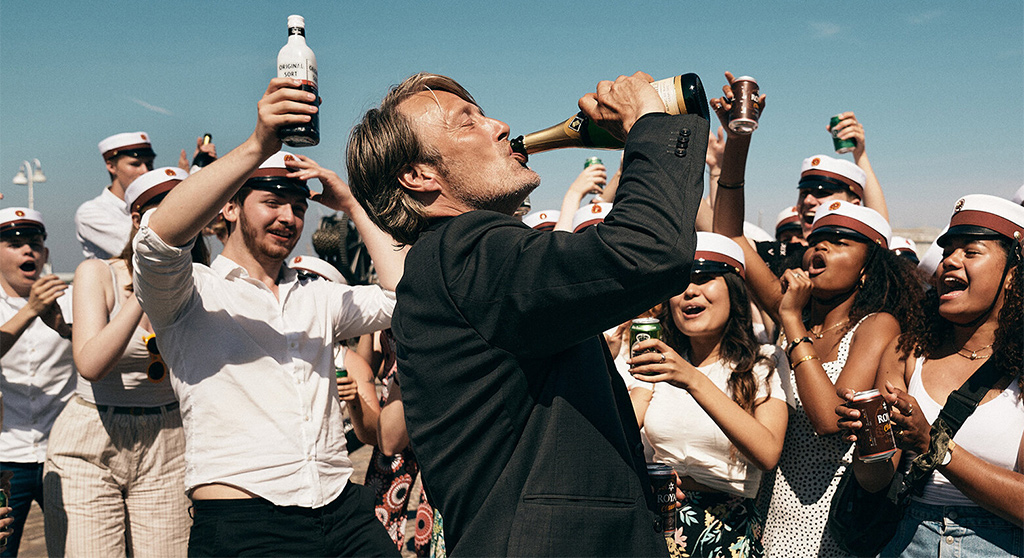 ‘Another Round’: Four stifled schoolteachers plunge into alcohol as a lifestyle, sink or swim

Thomas Vinterberg’s “Another Round” is a dark contemplation flipping between the glorification and pitfalls of routine alcohol consumption. The film begins with teens partaking in a keg relay race around a lake and, later, in their buzzed post-race state, making something of a nuisance of themselves on the subway. The matter is subsequently taken up by the faculty at the intimate Danish academy they attend. Martin (Mads Mikkelsen), one of those teachers, listens intently, as he has teenagers at home as well. But one night, out for dinner and drinks with three fellow faculty to celebrate a 40th birthday, , there’s a moment of pause over Norwegian psychologist Finn Skårderund’s obscure hypothesis that humans need booze to thrive. Intoxicated by the idea, the four make a pact to nip at school to see how Skårderund’s suggestion changes their lives, amended by the caveat that, like Hemingway, there will be no late-night boozing or weekend benders. As a result, Martin becomes increasingly distant from his family, especially his wife (Maria Bonnevie) who works at night; but in the classroom, his lack of inhibition allows him to break out and connect with youthful charges who revel in raucous history lessons focusing on notorious suds-sucking world leaders such as Winston Churchill and FDR taking on a, he notes, a teetotaling Adolf Hitler.

As you can guess, there’s a buoyant swell of wins before some major downs. One of the four gets so knackered he wets the bed and blames it on his 2-year-old, let alone not being able to find his legs to get off the floor and to go to school. In another scene, another of the four give emboldening nips of vodka to a nervous student on the verge of failing an oral exam. Vinterberg, who teamed up with Mikkelsen for “The Hunt” in 2012 – something akin to a Danish “Straw Dogs” (1974) – keeps much of the judgment off frame. Mikkelsen, whom most Americans probably know for his go as a Bond villain in “Casino Royale” (2006) or Hannibal Lecter in the underappreciated TV series “Hannibal,” gives his best performance to date, awards-worthy in Danish or English. Many might not know that Mikkelsen was a dancer by trade early on, and the skill is put to glorious use in the final scene, a surprise in its own right considering the nadir it springs from. The final 10 minutes of the film are unforgettable, uncannily ebullient and hauntingly disturbing.

“Another Round” starts Friday as part of the Brattle Theatre’s Virtual Screening Room.