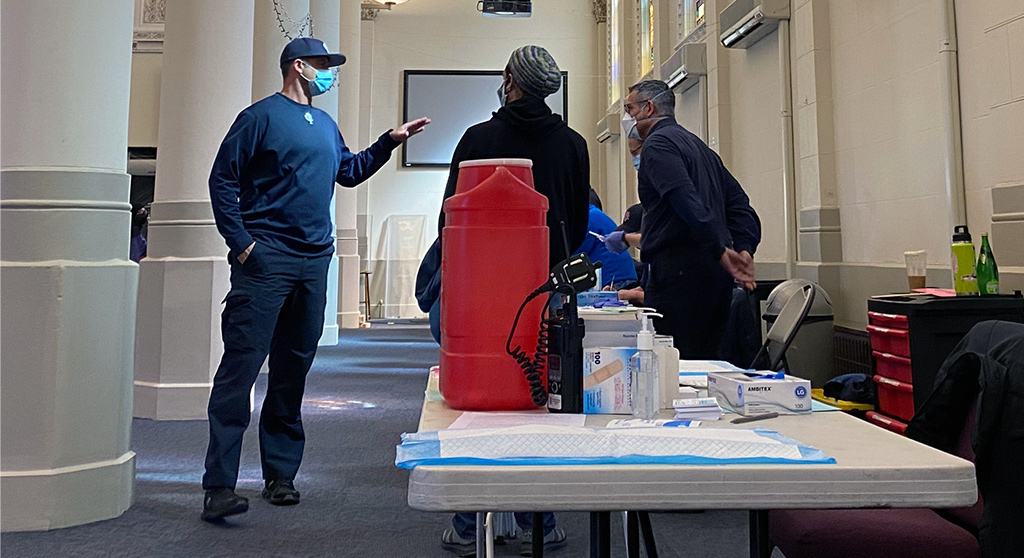 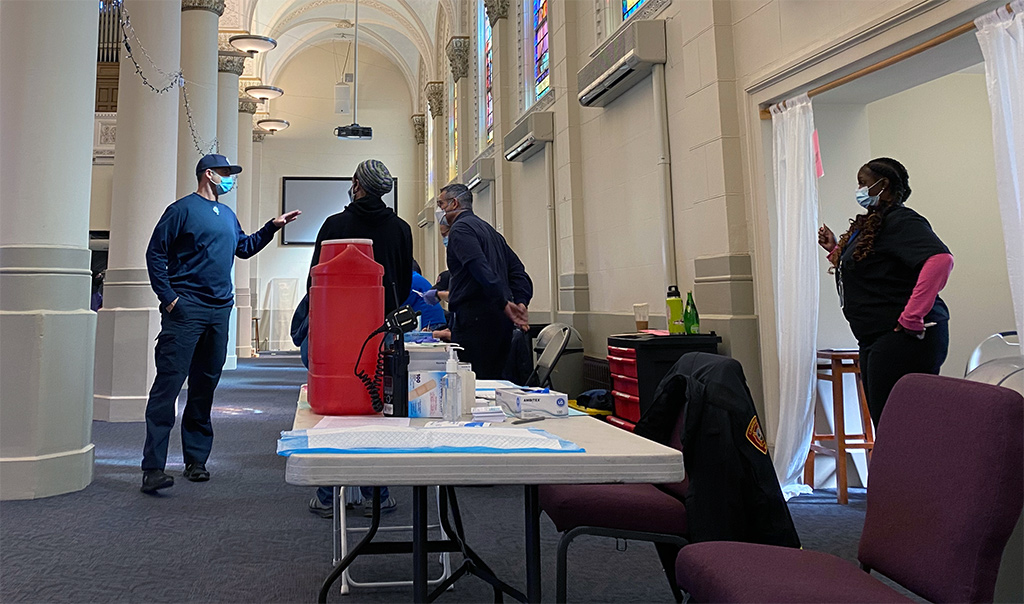 A May 1 vaccination clinic gears up at Reservoir Church in North Cambridge. (Photo: Marc Levy)

New coronavirus cases have declined to a trickle and well more than half the city’s population have been fully vaccinated against Covid-19. Cambridge will end its mask mandate this weekend and its state of emergency on June 15, after 15 months. Yet public health officials and scientists aren’t ready to declare an end to the pandemic that has upended ordinary life here and killed 123 residents.

At the City Council’s most recent meeting Tuesday, City Manager Louis A. DePasquale called the situation “a turning point in this pandemic.” Chief public health officer Claude Jacob said the city is lifting the mask requirements “at the moment” and will continue to track Covid-19 cases. “If there are any concerning developments occurring, just know that we continue to monitor the situation,” he said.

The city’s Expert Advisory Panel of scientists wasn’t endorising a rest. “The panel agreed that the most important thing now is to build and reinforce confidence in the safe resumption of regular activities, while continuing to recognize that the pandemic is not completely over and risks persist for some groups,” notes of the group’s May 12 meeting said. They are the most recent minutes posted publicly by the city.

“The fatigue is real, but also the need to maintain focus and vigilance to get us through the end of the year is also very real,” the notes said. Covid-19 may well become a seasonal virus like the flu, and if it does, changing public messaging to align with that shift will be “a huge challenge this fall and over the next few years,” the notes said.

The panel itself will hold its final meeting June 9, city spokesman Lee Gianetti said. The group was scheduled to have its next to last meeting Wednesday and hear from representatives of Biobot, the company analyzing city sewage for Covid-19, about the prospect of tracking variants of the virus. The scientists, who volunteered their time weekly last year and every two weeks more recently, have met since March 24, 2020.

The state will still require people to wear masks on public and private transit, in health care settings such as hospitals and doctors’ offices, and in congregate sites, including nursing homes and assisted living centers, group homes, homeless shelters and prisons and jails. Cambridge public health commissioner Assaad Sayah, who also heads the Cambridge Health Alliance, recommended that youths who are not vaccinated continue to wear masks while playing sports, at least until June 15.

On the other hand, the end of the mask mandate leaves individual businesses free to adopt their own policies. Trader Joe’s, Whole Foods, Target and Walgreen’s will drop mask requirements for customers and maintain them for workers, according to news reports and company websites.

The average number of new confirmed cases per 100,000 population over the past seven days was just 0.8 cases on Thursday, about the same as in early July 2020 during last year’s lull. The count of new cases, as opposed to the average rate, has stayed in the single digits for most of May.

At the same time, the pace of vaccinations is slowing. Notes from the experts’ May 12 meeting said the city’s walk-up vaccination clinics were serving about 130 people over five days, “which is a steep decline from earlier clinics.” Residents may be getting vaccinated elsewhere; Jacob told councillors Tuesday that the percentage of residents under age 20 with at least one dose had climbed sharply, to 43 percent from 14 percent in just one week. But in the next week, which ended Tuesday, it rose more slowly, to 47 percent.

Overall, 69 percent of Cambridge residents had received at least one dose as of Tuesday and 57 percent were fully vaccinated, according to the state Department of Public Health weekly vaccination report.

The picture is mixed. The Cambridge Health Alliance had 400 doses for a vaccination clinic at Cambridge Rindge and Latin School this week, and 142 students had signed up for a shot as of Tuesday, Jacob said. According to a weekly report May 20, the Cambridge Public Health Department had used all the Moderna vaccine received from the state but only 46 percent of the Johnson & Johnson vaccine, which requires only one dose for full vaccination. Notes from the Expert Advisory Panel meeting said the city was transferring some vaccine to ProEMS, the city’s emergency medical services provider, to administer in nursing homes and other long-term care facilities.

The vast majority of long-term care residents have been vaccinated, but vaccination rates among workers are lower. The state Department of Public Health has ordered facilities to report the rates but is not disclosing them on its public dashboard.

Vaccinations for students are being prepared, with clinic expected to come to the high school