On the ground in New York City during 9/11, jolted from the mundane by growing terror 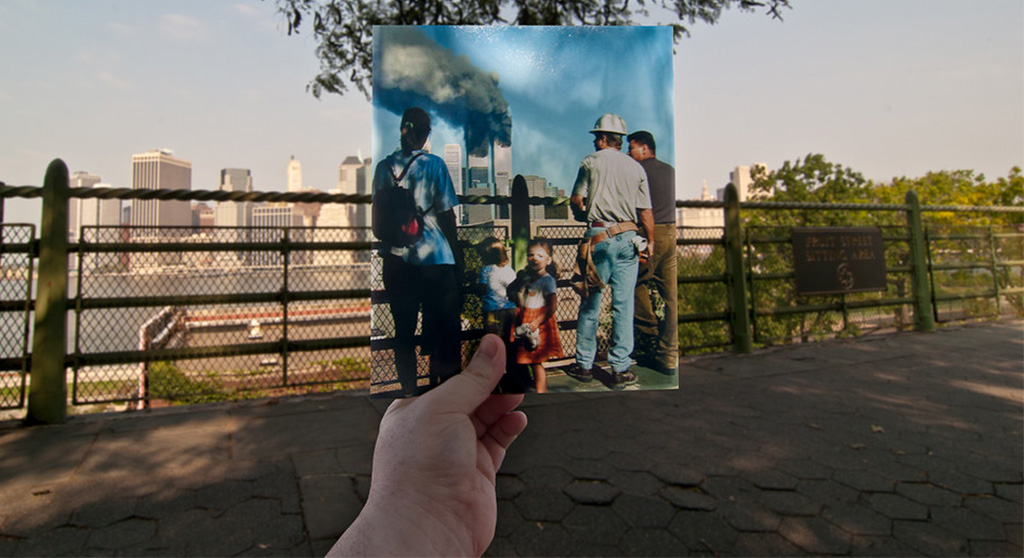 On the ground in New York City during 9/11, jolted from the mundane by growing terror

Marlene Lundberg was working in New York City out of offices at the World Trade Center at the time of the Sept. 11, 2001, terrorist attacks. These are her memories of the day. 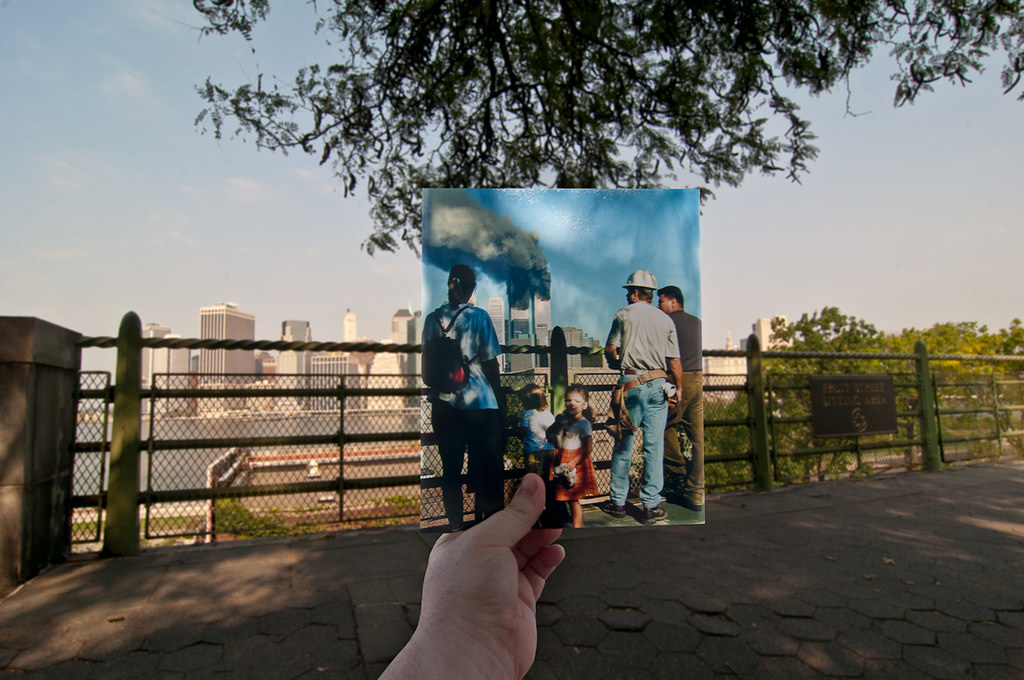 I was on the West Side subway as usual headed to lower Manhattan to work – rating bonds for the National Association of Insurance Commissioners. A rare announcement said the train was stopping because of a fire.“Oh, trash on the tracks caught fire again. Well, I’ll have to walk the rest of the way,” I thought.

But after climbing the dark stairs to daylight, I saw hundreds of people filling the street and looking toward the sky five blocks south. Police prevented us from getting closer, but we could see two towers with multistory black holes ringed with fire. Repeatedly we had to step aside for vehicles pushing through: ambulances, police cars and firetrucks with sirens.

My thoughts turned to my workplace at 7 World Trade Center at the right side of my view, closer to me than the towers. I realized that many of my colleagues were already at work, just across the street from those towers. As my building was untouched, I first mused superficially that my office would stay open, then realized it would likely close but maybe we would be back at work tomorrow. I was still in my little mundane world.

Back to the towers, I realized I knew three people employed there who might still be inside. There were flames, but not all that many. Then it struck me: “All those poor people on the floors above the flames.” In the confusion, I noticed what seemed to be thousands of sheets of metal reflecting back the bright fall sunlight. It wasn’t until months later that I realized those actually must have been sheets of white paper flying up.

Having been down in the subway for the past 45 minutes, I knew nothing. What had happened?

Someone said the towers had been hit by airplanes. One plane might be an accident; two almost certainly meant terrorism. The Trade Center had been bombed before, from an underground parking lot. I thought Saddam Hussein must be involved, because the situation reminded me of Iraqi buildings being hit and collapsing during the Gulf War.

There were sprinklers in the towers that would stop the fires, someone said. Indeed, it looked like the flames were dying down. “Well, they’ll go out and maybe I’ll be going back to work tomorrow. And most of the people in the towers would escape,” I thought.

Then the flames started spreading. People were running toward me in a panic, and I ran too. I began to wonder if all of my colleagues had gotten out of the area safely. 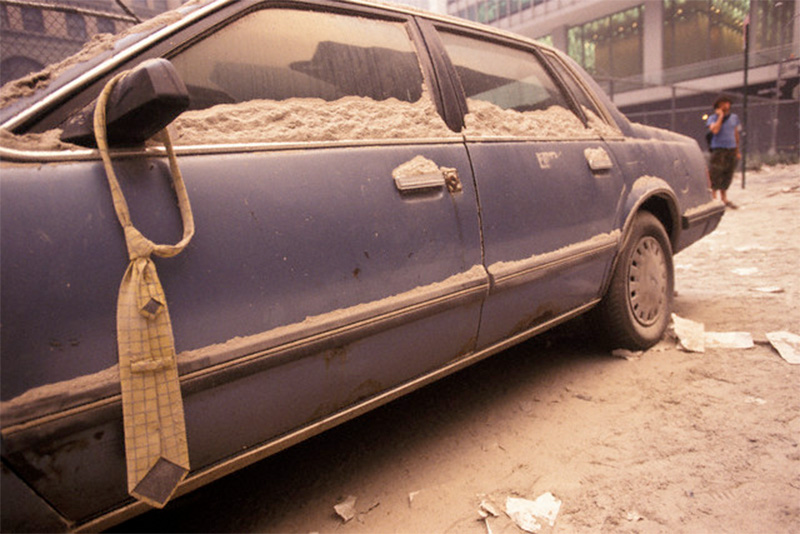 A car is covered with dust near the World Trade Center on 9/11, holding a worker’s abandoned tie. (James Leynse/Corbis on Globovisión via Flickr)

I decided to head home. With subways on the West Side shut down, I walked to Broadway; the East Side was also closed. From an empty car with the door open, a radio blasted the news that the Pentagon had also been hit. What was going on?

Suddenly, fearful people were running toward me again, away from a loud rushing sound and a blast of white smoke and dust across Broadway. With skyscrapers blocking my view, I couldn’t tell what was happening.

Moments later, someone shouted the southern tower had collapsed. I doubted that.

With no subways or cabs available, I walked back to the West Side toward home. The WTC became visible again and I believed it: The left tower was gone.

I kept trekking northward with thousands of people, often pausing to look back. Three times I numbly comprehended what was happening when I saw little black stick figures, about the size of a thumbnail, plummeting 100 stories through empty air.

Then the northern tower imploded in ballooning clouds of dust. A stunning skyscraper that took years of human effort to build had collapsed in the time it took to take a breath in and out. From where I stood, maybe a mile away, all I could hear was a surprisingly moderate rushing sound. But then I realized the fate of the many rescue workers who had sped by, their sirens screaming toward the gigantic wound. 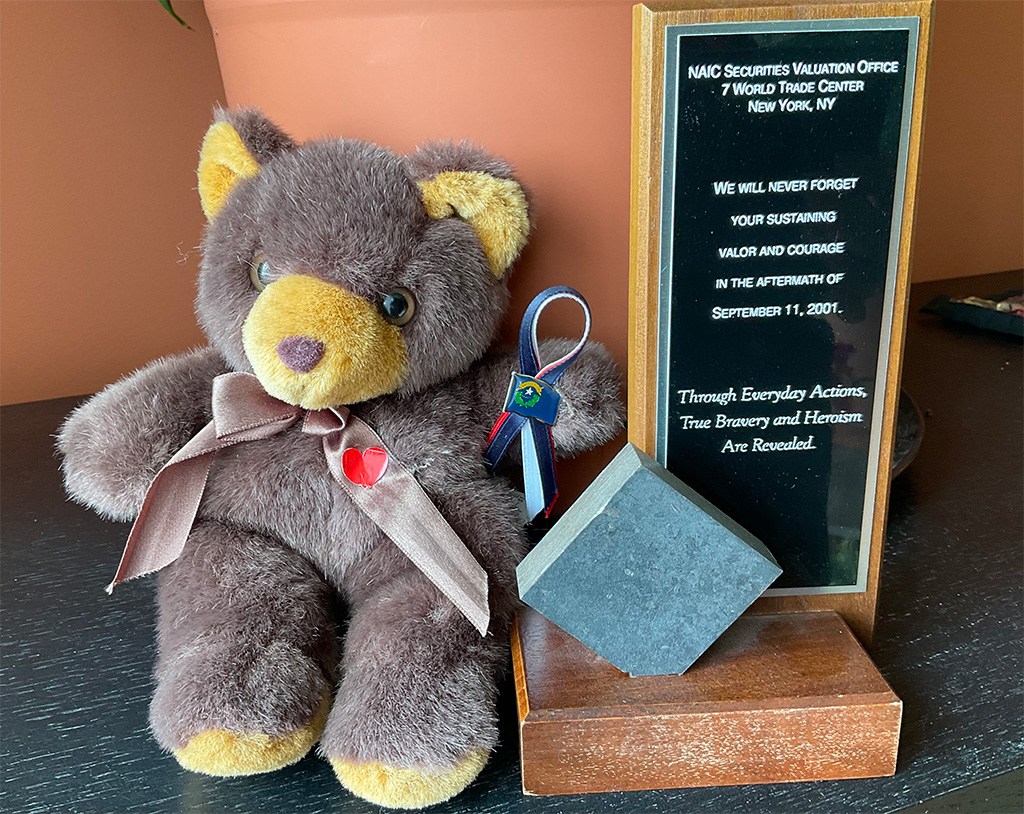 A faded teddy bear from a client wishing well to the National Association of Insurance Commissioners, which had New York offices at the World Trade Center on 9/11, and a plaque with a 2-inch chunk of steel from the fallen buildings saying “We will never forget your sustaining valor and courage” after the attacks. (Photo: Marlene Lundberg)

After walking two and a half hours, I reached home. A call from our Kansas City headquarters informed me that about 25 of my 40 colleagues were confirmed safe, but the status of the rest was unknown. (In time, we learned that all were okay.)

I knew my parents and siblings in the Midwest would be worried and tried to call, but the phone wouldn’t work. (A phone tower had gone down in the disaster.) Eventually, I reached siblings by email, and they called my parents. My phone rang again, and I heard the first voice from my colleagues that day – my assistant Shivani, kindly checking on me.

At about 2 p.m. I heard that my building, 7 World Trade Center, was on fire. Unbelievable. (I later learned that Mayor Rudy Giuliani had an emergency command center on the 23rd floor. The thousands of gallons of fuel needed for it fed the flames in the building. The National Institute of Standards and Technology said in 2010, though, that the fuel oil systems in WTC 7 didn’t contribute to its collapse.)

I spent the rest of the afternoon answering emails, taking phone calls and keeping watch for news on TV. Finally, around 5 p.m. I saw my building collapse like the rest. A hole in my stomach. A hole in the skyline.