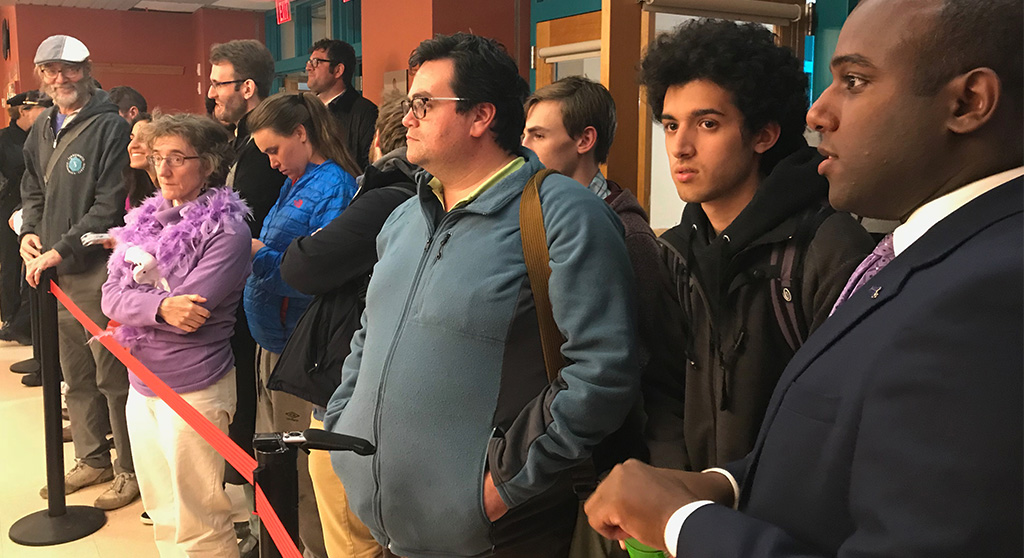 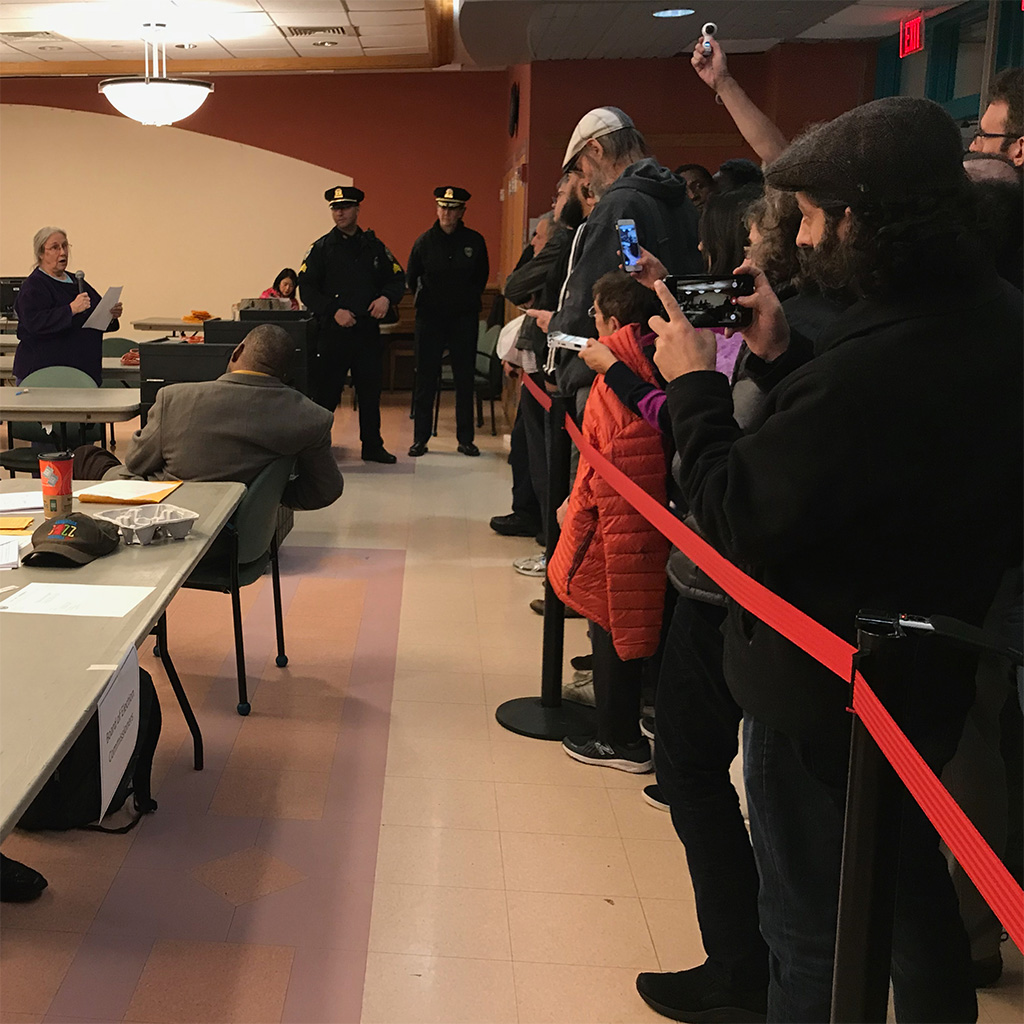 The usual crowd of Election Night result watchers in the Citywide Senior Center, like the one in 2017, will be barred this year. (Photo: Marc Levy)

If you’re wondering what a pandemic-era Election Night will be like in Cambridge, so is the Election Commission, even though voting is Tuesday, just a week away.

Most likely, election results will be emailed to all who sign up to get them, rather than letting candidates, their staff, the media and the general public from crowding as usual into the Citywide Senior Center in Central Square.

The paper output from precinct vote-counting machines will be displayed at the glass wall at the front of the senior center for people to look at in the open air, staff said. They discussed scenarios at the Election Commission hearing held Wednesday.

Results would also appear as usual on city websites and social media, but the communal aspect of cramming into the watcher’s galley will be lost. (For the state and presidential election of November 2020, when fewer people would be expected anyway, three members of the public and media were allowed in.) 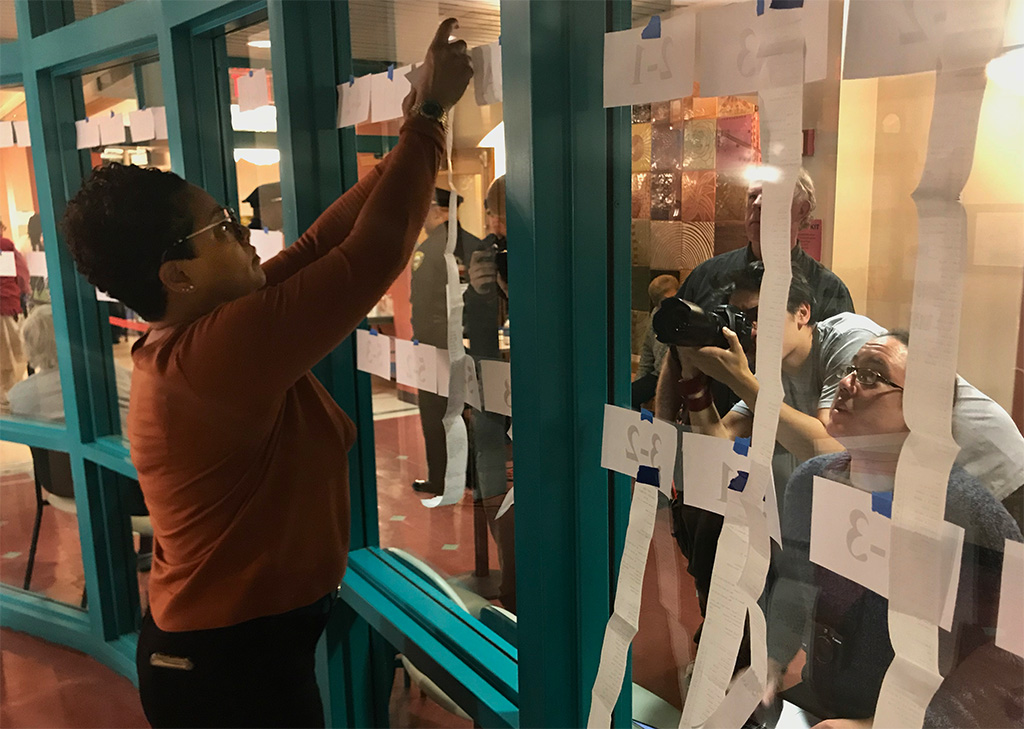 Paper results from precinct voting machines are taped up by Election Commission executive director Tanya Ford-Crump at the Senior Center in 2019. This year, the figures should be visible from outside the facility. (Photo: Marc Levy)

No crowds, but no cameras

The Law Department, health officials, information technology experts and the City Manager’s Office were among those being consulted on a plan, though commissioner Ethridge King preferred to come up with a solution and present it, rather than wait for an interdepartmental consensus. “At the end of the day, this is the Election Commission’s responsibility,” he said.

The Senior Center is not set up with cameras for the 22-CityView municipal television channel; a livestream using the Zoom video conferencing platform might mean nothing more than setting up a laptop with a camera on a desk somewhere, commissioners said.

In addition to it being unsafe to crowd the typical number of people together, the senior center will be packed more so than usual with extra equipment, Ford-Crump told commission members. The three ballots that voters will get – this year including three questions reforming the city charter – would overwhelm the city’s tabulation machines, so all precincts will have two machines to speed up the count.

“There will be double the machines, more workers, drivers will be coming in with twice as many ballot boxes and auxiliary bins, and they’re not to be separated,” Ford-Crump said. “We need everything to be on point, and we can’t have public hanging out in the hallway.”

It was even unclear from the discussion where the four commissioners would sit on Tuesday during tabulations, and whether the senior center would remain the site for what King expected to be Wednesday and even Thursday’s continued count.

The Election Night broadcast by Cambridge Community Television won’t happen as usual either. While politics watcher Robert Winters and his “InsideOut” co-host Susana Segat have been set up for years in the senior center cafeteria, watching the counting action in the ballroom through glass doors while a parade of guests sit to discuss their expectations, this year the broadcast will have to come from the CCTV offices down the street. The broadcast will be begin at 8 p.m. Tuesday on Channel 8, led by producers remotely. “We will hopefully have some results, but it’ll depend on when they come in,” executive director Jessica Smyser said Wednesday night.

Youth producers will report and there will be guests over the course of the night, Smyser said. More details are expected to be publicized Thursday.

In 2019’s municipal elections, there were 21,239 valid ballots counted. King said he expected this year to draw between 17,000 and 19,000 voters, but the commissioners warned it would be a long, slow night regardless of potentially lower turnout – in part because 12, 961 absentee or early voting ballots have been sent out and 3,210 of those had come back as of Tuesday. That included 478 who had voted in person. “It’s going to be a late night,” commission chair Larry Ward said of Tuesday’s count.

With polls closing at 8 p.m. and drivers afterward bringing the ballots to Central Square, commissioners expected to sit down to the count at 9:30 p.m. Tuesday and reconvene at 9:30 a.m. Wednesday back in the Senior Center. If a count went into Nov. 4, it was not yet clear where that would be held, said Lesley Waxman, assistant director of the commission. Their provisional count was tentatively set for 4 p.m. Nov. 12, after which results could be made final and officials.

“It’s a little bit different in that respect with our ballots,” commission member Victoria Harris said.

One way the pandemic could work in the commission’s favor is its generally lower expectations: “People are used to waiting, I think, at this point. I mean, we’ve all been waiting for a long time for groceries and Covid tests and all that,” Harris said.

This post was updated Oct. 28, 2021, to correct that when commissioner Ethridge King said that “in my gut” he expects results to take an extra day or two to be reported, he was speaking of auxiliary votes; and to correct that Larry Ward is chair of the Election Commission. The commission website said Victoria Harris was.