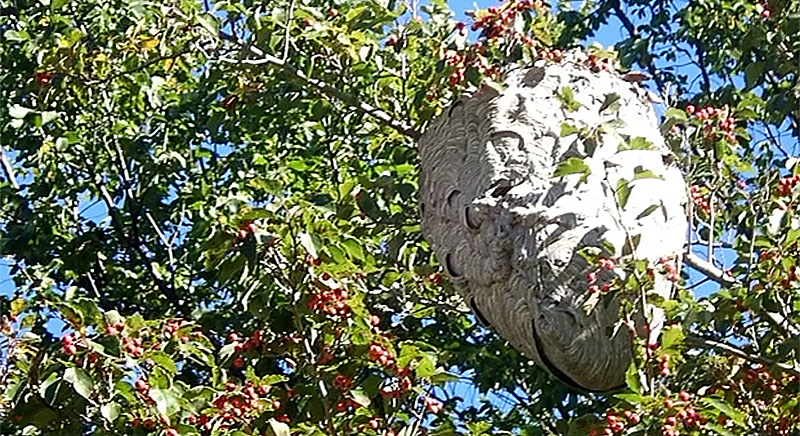 Fresh Pond Reservation rangers are hoping for a break in an unusual case involving a unique crime: Theft of a hornet’s nest.

A man “brought his own saw to cut a branch off of the hawthorn tree that hosted it,” rangers said in a Tuesday post on social media.

Visitors to the reservation that surrounds Fresh Pond in western Cambridge marveled this fall at the sight of the very large hornet’s nest in a tree between the perimeter path and the main entrance of the Water Department building. Constructed layer by layer out of regurgitated wood pulp – the hornet equivalent of papier-mâché – the nest weathered a nor’easter and several other periods of heavy rain and wind yet remained miraculously intact.

A sandwich board sign beneath the tree reassured visitors that this colony of bald-faced hornets had built their nest just high enough to put themselves – and people worried about getting stung – at ease. One could almost imagine that the worker hornets chose such a prominent site for their queen’s palace because they wanted us to appreciate its sculptural beauty and resilience. And we did: Over the past four months, thousands have paused to admire the nest. As Thanksgiving approaches, the best comparison I can offer for the nest’s size is to a good-sized turkey, though it would have weighed far less.

The nest stood sentry at the entrance, a symbol of peaceful coexistence, until around 2:30 p.m. Saturday, when someone stole it, rangers said. Sunny weekend afternoons are peak visiting hours at the pond and it’s astounding that the thief dared to act so brazenly. The nest was within range of the video cameras covering the parking lot, and the rangers are asking for help in identifying the thief. Ranger Tim Puopolo, who has been documenting the nest for a video on the hornets’ life cycle, said his crew had planned to remove the nest this week as nighttime temperatures dropped to ensure proper hibernation of the queen (other colony members had mostly died already). The nest would have been dissected, studied and preserved for educational purposes.

“This act robs the public of not only the opportunity to view the scheduled laboratory dissection video but also deprives our visitors of the public viewing of the nest after preservation as a display piece in the ranger station,” rangers said online.

Anyone with information about the nest’s removal should contact “Ranger Tim” at tpuopolo@cambridgema.gov.s