The state is going to remake Memorial Drive. Public comment will help decide how it’s done. 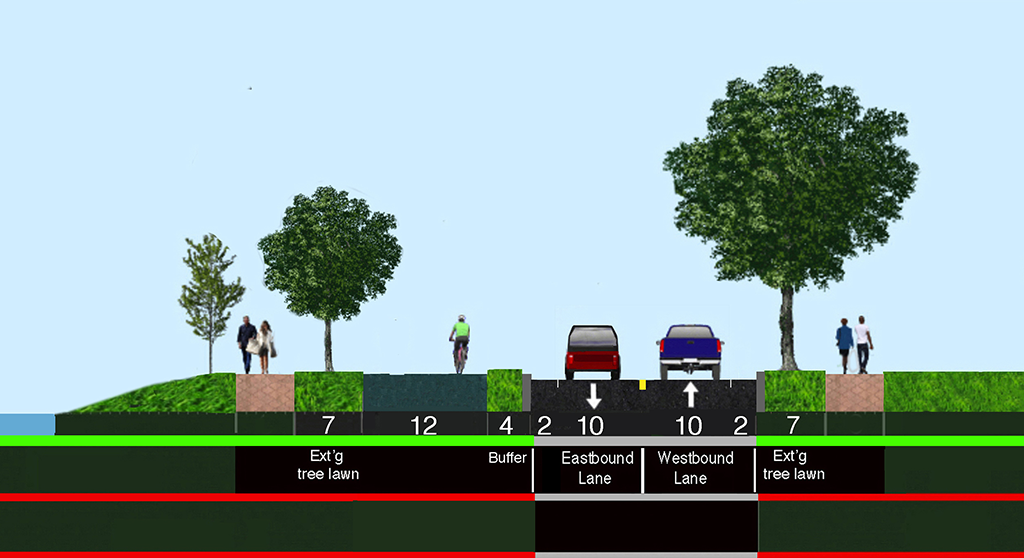 The state is going to remake Memorial Drive. Public comment will help decide how it’s done.

By Jan Devereux and Chris Cassa

A state proposal for Memorial Drive that includes a cycle track and two travel lanes. The Charles River is on the left.

When the state Department of Conservation and Recreation initiated its “Phase III” planning process for Memorial Drive in 2019, a coalition of more than two dozen local environmental, community and transportation organizations and local officials formed the Memorial Drive Alliance to advocate with the motto, “A parkway is not a road. It’s a park with a road in it.”

Initial proposals from the DCR left the roadway completely unchanged, locking in another generation of highway traffic and dangerous conditions along the riverbank. In response to feedback, the state proposed a road diet from Gerry’s Landing Road (next to Mount Auburn Hospital) through JFK Street and major separated pathway improvements to the Boston University Bridge.

The Alliance was fully engaged in the public process and met separately and together with state and local officials until the state paused its outreach and engagement on the project after two well-attended community meetings in mid-2019. The public was also incredibly engaged, submitting more than 1,000 written comments with more than 97 percent pushing for expanded and separated pathways, reduced space and safer traffic speeds for automobile traffic and/or restoration and expansion of trees and parkland. In the interim, the public engagement process stalled, a new project manager was appointed and the DCR narrowed the project scope by unlinking improvements at major intersections from the pathway improvement project.

The Alliance and many others were taken by surprise when DCR submitted a 149-page Environmental Notice Form to the Massachusetts Environmental Protection Agency that provided fewer than 10 days between a public environmental review meeting and the deadline for public comment (“State brings back its plans for Memorial Drive, unannounced and changed without explanation,” Jan. 17). At the public meeting, a design was presented that would reconstruct only the section between the Harvard Bridge at JFK Street and Gerry’s Landing Road. (The remaining section, where there is higher traffic volume, numerous intersections and varying widths along the riverbank, poses far more complex design challenges and will be reconstructed in a subsequent Phase IV.) The meeting notice stated that the Environmental Protection Agency will issue a certificate on the ENF on Monday, but deadlines may be extended.

At the Jan. 18 environmental review meeting, the DCR project team stated that it anticipated scheduling another public meeting in March. The slides presented at the meeting may be viewed here.

Collaborating on short notice to meet last Thursday’s deadline for comments, the Alliance wrote to the state’s energy and environmental affairs secretary, Kathleen Theoharides, in support of DCR’s plan for a road diet that would reduce vehicular travel lanes to two from four, but opposed specific aspects of the proposed design. Mayor Sumbul Siddiqui and city councillor Quinton Zondervan signed onto the Alliance’s comments, which may be read in full here.

The Alliance’s suggestions for improvements to the design included to:

In addition, the Charles River Conservancy, Cambridge Bicycle Safety and the People for Riverbend Park Trust, whose volunteers have stewarded the area for more than four decades, all endorsed the Alliance’s comments and also submitted individual letters. CBS’ comments supported placing the protected bike lane within the road’s existing right of way rather than on the shoreline. The Riverbend Trust offered suggestions on ways to enhance the experience of Riverbend Park users, especially during the weekend vehicular closings. The Conservancy reiterated the others’ call to prioritize planting native species and a plan to care for mature and newly planted trees.

The Cambridge Plant & Garden Club wrote separately to suggest that the state conduct a technical report on the soil and root conditions of the London plane trees and a cultural landscape study of the area before proceeding with the design.

The CP&GC’s particular concerns for preserving the vegetated shoreline and the pastoral character of the landscape and for protecting the London plane trees were echoed in a letter from the Cambridge Committee on Public Planting, a group of volunteers appointed by the city manager to review large development and public open space projects.

All of these comments may be viewed on the MEPA Public Comments Portal (search for project 16495 under “view submitted and accepted comments”).

The next few months will be critical in raising public awareness and engagement with the planning process, which presents a once-in-a-generation opportunity to rebalance the use of this treasured parkland, enhance the safety and enjoyment of all park users and increase the riverfront’s resilience to the projected effects of climate change.

Jan Devereux is trustee of the People for Riverbend Park Trust and Green Cambridge and a former vice mayor. Chris Cassa writes on behalf of the members of the Memorial Drive Alliance.