Being Black in war-torn Ukraine

Being Black in war-torn Ukraine 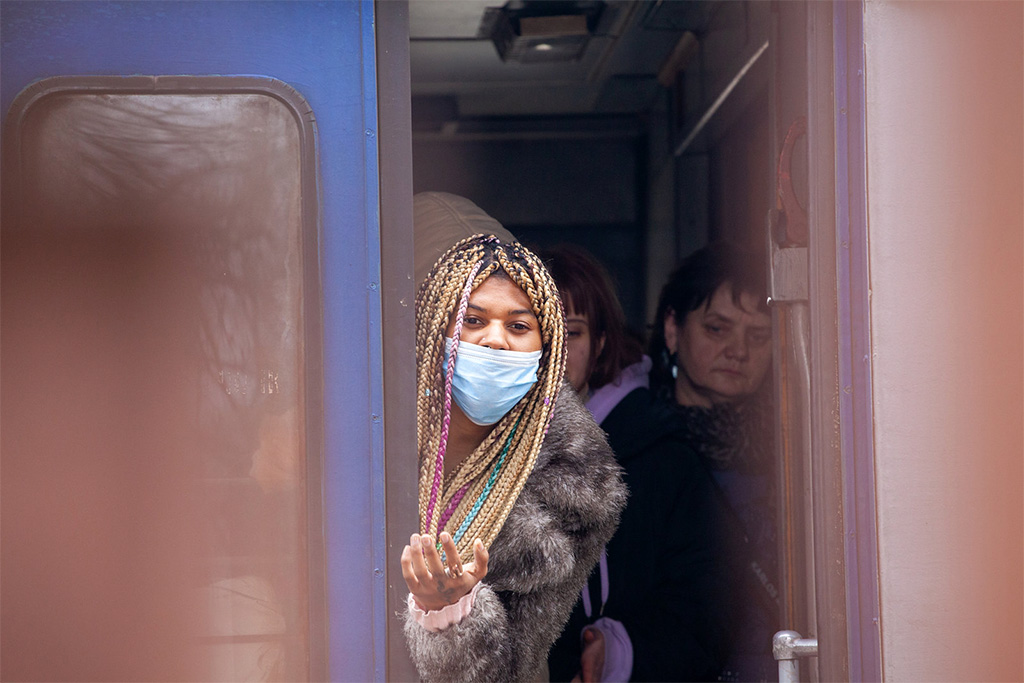 A train of refugees from Ukraine arrives Feb. 27 in Przemyśl, Poland. (Photo: Mirek Pruchnicki via Flickr)

“As long as you are Black, no one likes you,” Ethel Ansaeh Otto told ABC10. Otto is a student from Ghana trying to flee Ukraine, like many others. “Mostly, they would consider white people first. White people first, Indian people, Arabic people, before Black people.”

A deluge of footage and posts on social media show the mistreatment of Africans: taken off trains and told to walk to the border; chased back from the border in specific countries; hit by police armed with sticks as white Ukrainians were allowed entry; moved to the back of the line and told to wait; or simply flat-out told by border officials they were “not tending to Africans.”

Despite an order that all women and children are allowed to leave Ukraine, Black mothers, many of whom lived in Ukraine for years, were physically prevented from getting on trains and buses.

Poland might as well erect America’s classic Jim Crow “white only” placard, since its double standard toward Africans has been on full display. Polish nationalists have attacked Africans and made false claims of theft and crimes. “One group of Nigerian students having been repeatedly refused entry into Poland have concluded they have no choice but to travel again across Ukraine and attempt to exit the country via the border with Hungary,” according to a Twitter account representing the presidency of the Federal Republic of Nigeria.

The hashtag #AfricansInUkraine arose on Twitter to draw attention to the double-standard and mistreatment, because mainstream media hadn’t been covering the abuses.

Anti-Black racism is global. When wars erupt in European countries, African diaspora Blacks have difficulty being safe or getting back to their home country – especially if the country they are in is anti-America.

Russia likes to stoke America’s racial tensions and could now be using basketball phenom Brittney Griner to do it: On her way home from Russia last month, she was detained at Moscow Airport and arrested for allegedly possessing a vape with cannabis oil. According to Russian authorities, if Griner is found guilty, she could face between five and 10 years in prison.

Since Jan. 23, as tension with Ukraine ramped up, there’s been a State Department “do not travel” advisory in place for Russia because of “the potential for harassment against U.S. citizens, the embassy’s limited ability to assist U.S. citizens in Russia, Covid-19 and harassment by Russian government security officials, and the arbitrary enforcement of local law.”

Griner’s troubles remind me of what happened to jazz musician Valaida Snow early in World War II. Snow played concerts throughout the United States, Europe and China. On a return trip to Nazi-occupied Denmark after headlining at the Apollo Theater in Harlem, Snow, the conductor of an all-women’s band, was arrested for allegedly possessing drugs and sent to a Copenhagen jail. After 18 months of imprisonment, Snow was one of the more fortunate Blacks to make it out of Nazi Germany, released as an exchange prisoner. Psychologically and physically scarred, Snow tried to return to performing, but her spark was gone.

Russia’s Ukraine invasion helps the world see what our inhumanity toward each other looks like, and highlights the persistence of a global racist social order even in a humanitarian crisis. Everyone has the right to cross international borders during a conflict, notwithstanding their religion or racial identity.