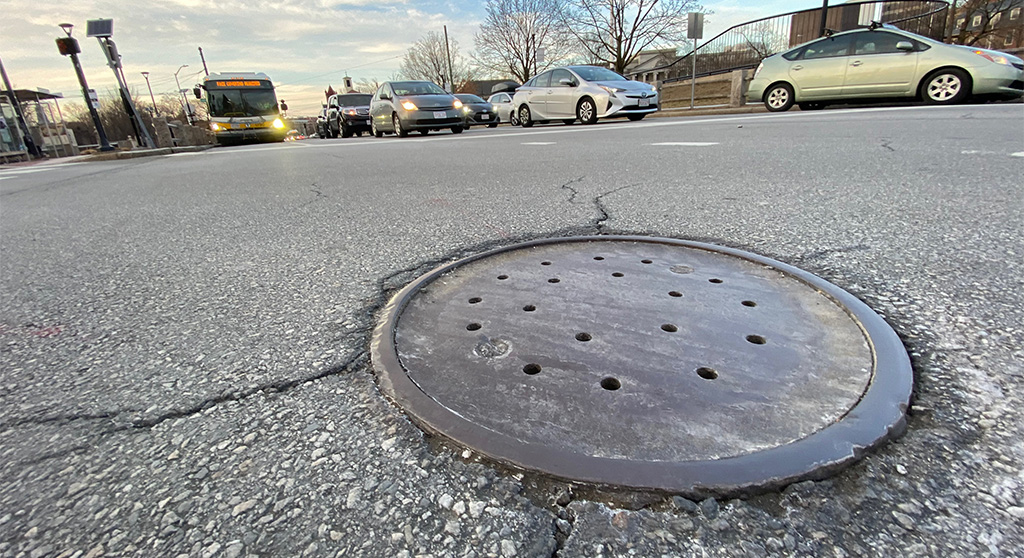 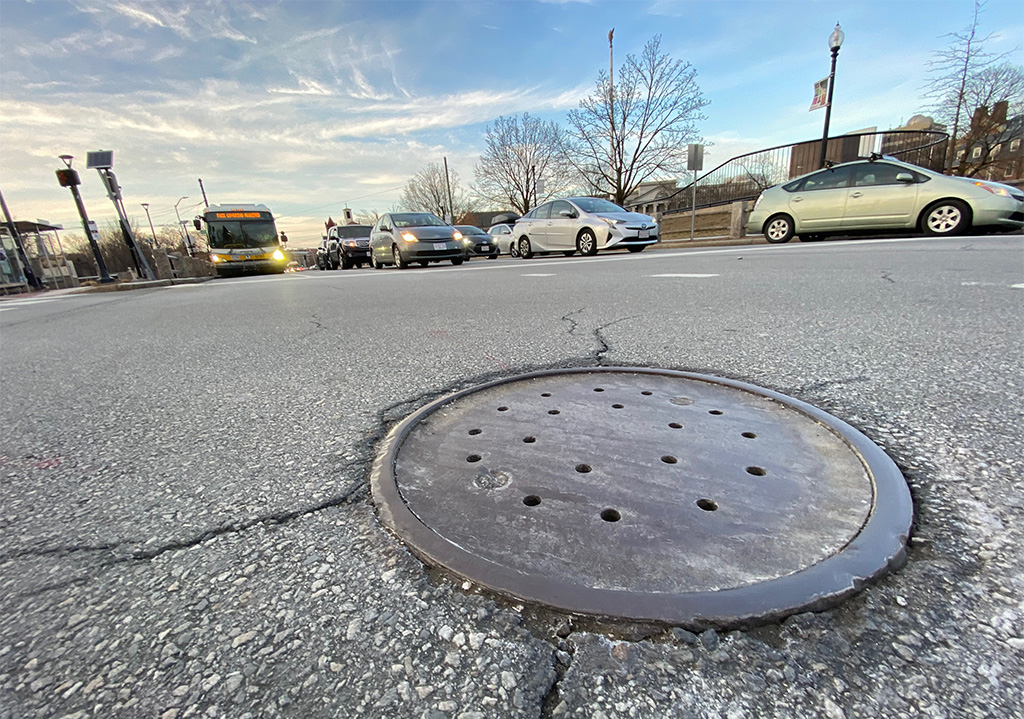 A sewage maintenance hole near Harvard Square, in front of a bus bearing a sign Thursday reminding riders to wear masks against the spread of coronavirus. (Photo: Marc Levy)

As Cambridge nears the end of its indoor mask mandate Monday in all but municipal buildings, the city’s Covid-19 case rate continues to rise. Yet levels of the virus in Cambridge wastewater have been dropping – until March 1, when the numbers rose briefly in sewage from two neighborhoods.

A week later, the amount of virus in wastewater collected from those two areas, labeled by the city as Cambridgeport and Mid-Cambridge, has once again declined.

The data on sewage and cases have raised questions about how well sewage levels predict case numbers in a small city such as Cambridge – where government cited the wastewater data as one reason for ending the indoor mask mandate, along with lower case numbers and hospitalizations.

Cambridge hired the wastewater analysis company Biobot to test sewage from the city starting in November 2020. Becca Malizia, a spokesperson for the company, said “our team doesn’t have any specific reason to point to as to why this divergence is happening,” though in general, not necessarily in Cambridge, “wastewater reflects the actual number of infections, which we expect are truly falling.” She suggested that an increase in cases could be caused by a reporting backlog, but didn’t provide evidence this is happening. 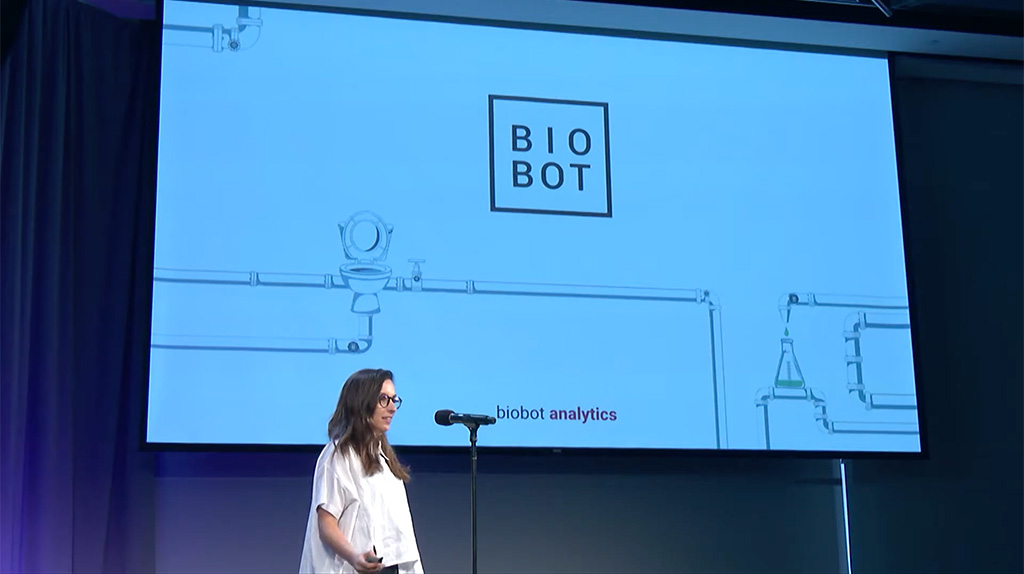 Newsha Ghaeli, co-founder of Biobot, explains the company’s process in a 2020 presentation to the E14 Fund. She is seen in a screen capture from an E14 Fund video.

Scientists on the city’s Expert Advisory Panel found the initial sewage data from the city volatile and said “the sewage data alone should not be used to drive changes in policy without looking at case and hospitalization data and trends,” according to notes from the group’s meeting Jan. 7, 2021. Daytime sewage levels can include contributions from nonresidents, a “limitation,” the notes say.

The panel was more positive at its next meeting three weeks later, noting that cases and hospitalizations had started falling after wastewater levels declined. “There appears to be predictive value in the wastewater data, but the EAP and [Cambridge Public Health Department] staff should take a closer look at these correlations when there is more time,” the notes of the Jan. 21 meeting said.

The average rate of new cases per 100,000 among Cambridge residents has about doubled since Feb. 14, from 25.5 cases on that date to 52.9 cases on March 8. For most of that period the amount of virus was going down in sewage from Cambridge and parts of surrounding communities included in the city’s samples – the same trend as in most of Eastern Massachusetts after the omicron peak in January.

Theoretically, the amount of Covid-19 in wastewater should be a boon to public health officials. The level doesn’t depend on how many people are being tested and whether results are being reported to state health agencies; as more people test themselves at home without notifying any public health entity about whether they’re infected, wastewater gives planners an unvarnished view of case levels.

And it has worked in many ways since Cambridge hired Biobot, said city chief environmental officer Sam Lipson. Overall “it’s been pretty smooth,” Lipson said. “The trend has been pretty good” in associating virus levels in sewage with number of cases identified through testing.

Deciding to add sewage to the city’s Covid-19 surveillance program “was an enormous source of hope” to employees at the public health department trying to keep tabs on the virus, because it stood to reduce uncertainty, he said. Some studies showed that wastewater levels could predict case counts several days in advance.

Yet wastewater analysis “is very much a complex, emerging technology,” especially in a small community, Lipson said. “This is very much a pilot. We are one of the few using it.” 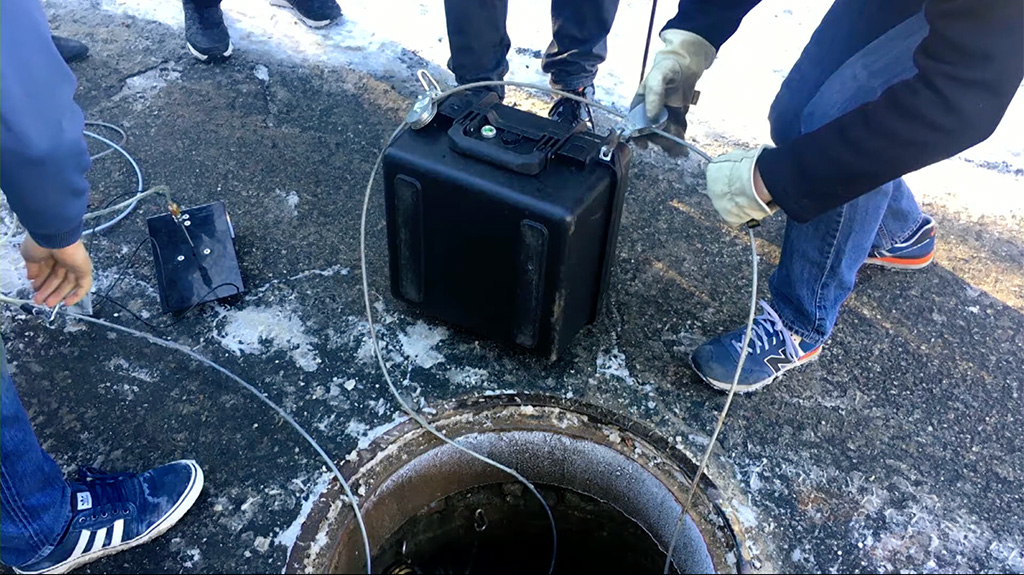 Biobot equipment is prepared to be lowered to capture sewage data in another screen capture from a February 2020 presentation.

One problem with using the Cambridge figures to predict cases is that Biobot collects one 24-hour sample weekly from four sampling points covering the city; almost all of Belmont; and small portions of Arlington and Somerville. Sampling once a week means that “it could be six days after a spike” that wouldn’t leave any footprint the day the sewage is collected, Lipson said.

The omicron variant created a new challenge in interpreting wastewater data, one that may affect more than Cambridge, Lipson said. People infected with omicron reach a peak viral load and become infectious in a few days, faster than with the delta variant or the original virus. The shorter period means sewage levels may not show an increase until after case numbers start rising. “Omicron makes it harder to use sewage as a predictor,” he said.

Still, “we didn’t sign up because we knew it to be predictive,” Lipson said. Instead, it’s been an experiment, and health officials are considering whether it’s feasible to use wastewater data to examine other public health indicators.

Work has been done on monitoring opiate use and food-borne illness with sewage analysis, he said. When Biobot developed its wastewater testing method at the Massachusetts Institute of Technology, scientists examined using the data to identify “metabolic diseases” such as diabetes in a population. Health officials could also use it to measure the level of “heat stress,” he said.

“We are still trying to figure out the appropriate use,” Lipson said.