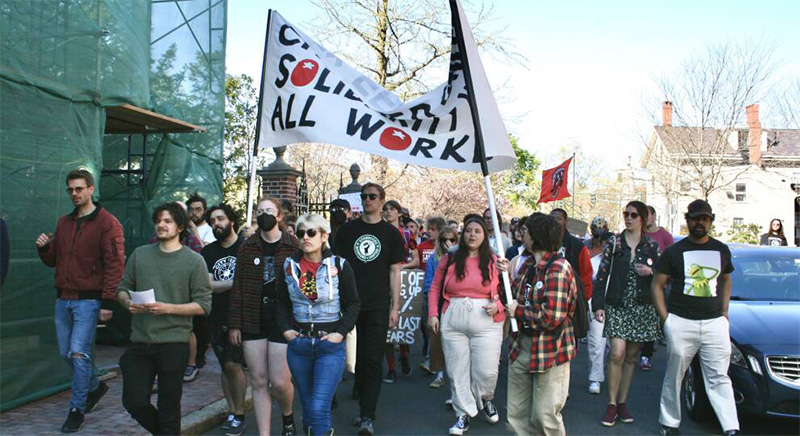 In his remarks to a crowd of thousands on Cambridge Common in August, Vermont Sen. Bernie Sanders declared, “We are not strong unless we are organized … and at the center of that has to be, must be, a strong trade union movement.” The Cambridge rally was one of several that Sanders and prominent labor organizers held over the summer to call attention to what they see as the essential role of unions in the U.S. economy. In their calls to action, the speakers emphasized the importance of labor unions in establishing vital rights and protections for workers over the past century and a half, and asserted that organized labor – once so widespread but with dwindling numbers in recent decades – is making a comeback. This is due in large part to younger workers, as well as those in the service sector, who are following the example of previous generations of unionized industrial workers but envisioning new ways of organizing labor and new reasons to do so.

As History Cambridge concludes our year of asking, “Who Are Cambridge Workers?” our Fall Conversation will focus on labor organizing in Cambridge, past and present. How do Cantabrigians see themselves as workers? How is their identity linked to their work? Do they see themselves as part of a local workers’ community, or do they identify with their profession across geographical boundaries? How has the pandemic and the shift (for some) to remote work affected this sense of community and identity? We will be joined by representatives from the MIT Graduate Students’ Union, the Cambridge Teachers’ Union and the 1369 Coffeehouse Workers’ Union to hear about their organizing efforts and the future of unionization in Cambridge and beyond.

Over the past three years, particularly during the dual pandemics of Covid-19 and the exposure of structural racism, unionization has increased significantly. In 2020, union membership rose to 10.8 percent of the workforce, the largest increase in almost three decades, with the highest gains appearing in the demographic of workers age 25 to 34. A September 2021 Gallup poll showed  more than 75 percent of young adults support unions. What accounts for this upswing in support for and participation in organized labor? Analysts attribute much of it to two main factors: the role of the Covid pandemic and the shifting view of corporate responsibility in the wider world on issues such as social and economic justice.

Many of the newly organizing workers are part of the service sector. Considered “essential employees” during the pandemic, these workers were expected to be on the front lines while others in office jobs were able to work remotely. As businesses come back from the losses they sustained in the early pandemic months, service workers have been emboldened to assert their crucial role in keeping the economy going by pressing employers for higher wages and better working conditions. The relative abundance of service-sector jobs and management’s desire to hold onto workers contribute to the confidence with which labor organizers advocate for themselves and colleagues.

Another major factor in the push for unionization is a growing solidarity among workers. As millennials and members of Generation Z make up more and more of the workforce, their propensity to combine their work life with their dedication to social justice movements has led to an intersectional view of these issues. Involvement in activism has created a sense of solidarity with workers across geographical and industry boundaries, prompting laborers to see themselves as linked by class rather than by specific sector or location. The rise of social media has greatly enhanced that trend, as well as allowing workers to effectively organize across a greater span of space, time and industry. The ability of unions to share and amplify their message on social media has also given many employers pause. In a culture in which reputation is crucial and negative reviews can have staggering ripple effects, management is often hesitant to take any anti-union action that could be shared on social media and adversely affect public opinion and corporate profits.

What’s next for unions in Cambridge? Will the experiences of Covid and the Black Lives Matter movement result in a permanent shift in labor relations? Do workers feel more of a sense of solidarity with other laborers around the globe, no matter what industry they represent? How has this emerging form of worker congruity affected Cantabrigians’ identity as members of their local communities? We will explore these and other key questions about unionization in Cambridge at our Fall Conversation next week: “How Does Cambridge Unionize?” We welcome you to join us as we discuss the history of labor organizing in the city, current efforts at unionization and what the future holds for the workers and businesses of Cambridge.