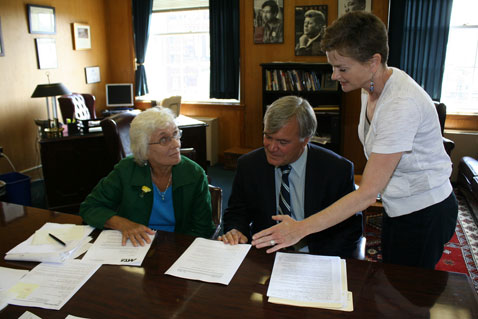 True, Cambridge teachers and other school-based unions start the school year Sept. 4 without contracts, but students and parents shouldn’t be affected, said Chris Colbath-Hess, president of the Cambridge Education Association.

“This is an anomaly,” Colbath-Hess said of starting a school year without contracts in place, “but in past years when we’ve had this happen there hasn’t been any impact on the educational program.”

Cambridge schools contracts run in three-year cycles, and when there isn’t one in place, unions operate under the expired version. Of the bargaining units with which the schools negotiate — officially it’s the School Committee doing the talking — the custodians, food service workers and safety officers got contracts in place this summer; the clerical unit settled and had its contract approved during the committee’s summer meeting, July 31. The contracts for teachers, paraprofessionals and substitute teachers end Aug. 31.

Talks are ongoing, productive and seeing progress, according to Colbath-Hess, Superintendent Jeffrey Young and Fred Fantini, vice chairman of the committee.

“Part of the reason at this point we haven’t settled yet is logistical reasons. It’s summer, and it’s just difficult to get teachers and paraprofessionals together in one place,” Colbath-Hess said.

“We’re taking the time to do a process that feels right to both sides. Trying to get everything done is always a challenge,” she said. “There’s so much going on the district at this point, and there’s a lot on everybody’s plate. ”

When the school year begins, it will be with four new upper schools in place for middle schoolers, a radical change from a district that has been split between K-8 schools and the Cambridge Rindge & Latin School and one that comes with the need for new administrators, staff and materials as well as a need to re-examine curricula and how the district coordinates everything from its communication to daily campus opening and closing times. But the change, called the Innovation Agenda, is not named by either Colbath-Hess or Fantini as the cause of delays in contract settlements.

“There might be a bit of a slowdown, but I don’t think it’s the Innovation Agenda,” Fantini said Wednesday. “We’ve been really busy, and it may have affected the formation of teams … we haven’t had the same teams we’ve had in the past. But in terms of meetings or degree, it hasn’t really impacted much.”

One way the Innovation Agenda may have added time to negotiations, he said, is that a new curriculum brings the need for separate evaluation standards.

“There’s a lot more going on,” he said. “But I think we’re feeling very good about the contracts being settled.”

Young agreed, saying he was confident there would be closure “shortly” and assuring the committee “we are bargaining in good faith and working really hard to get to a place of a good and fair and just settlement.”

“We represent more than teachers. We have paraprofessionals in our union, clerical folks and substitutes,” as well as speech, occupational and physical therapists, she said. “We wanted to have a name that was more inclusive.”

Such a change has been discussed several times over the years, with another push made a couple of months ago and brought forward at the organization’s general membership meeting in June.

“There was the will to make the shift now, both on the executive board’s part and membership’s part,” Colbath-Hess said. The change has been reflected on the association’s website and Facebook page and in part on its president’s Twitter account, and “will in no way affect CEA’s relationship as members of the Massachusetts Teachers Association and the National Education Association,” an association press release said July 31.

This post was updated Aug. 9, 2012, to correct the name of the organization.