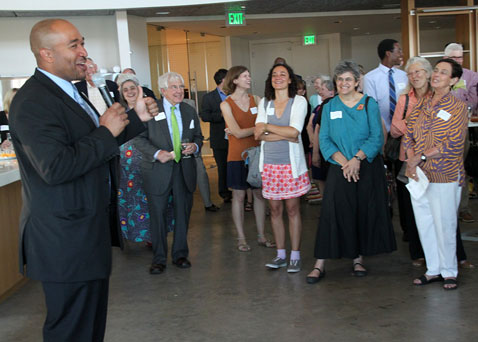 The word “transformative” popped up frequently at the recent community reception for Damon Smith, new principal at the Cambridge Rindge & Latin School.

As some 250 educators, business and community people, parents and students past and present gathered Aug. 2 to welcome Smith formally to his role, he spoke of the transformation he hoped to bring about.

The academic, athletic and artistic resources of the school “are the envy of many,” he reminded the audience, but “great is not good enough … CRLS, with its network of providers and supporters, can move from ‘great’ to exceptional, not only in the state but in the country.”

Taking the school to being a national model was his task, he said.

Mayor Henrietta Davis assured him the community was there to help by partnering with the high school.

Smith has been acting principal for the past year and was recently named permanent principal by Superintendent Jeffrey Young. A Cambridge resident, he was formerly dean of one the school’s small learning communities, assistant school director of New Mission High School in Roxbury and worked as a mentor teacher in the Harvard/Cambridge Summer Academy. He is a graduate of Wesleyan University and the Harvard Graduate School of Education.

The event was held at the Microsoft New England Research and Development Center in Kendall Square, and Brian Burke, a senior director at Microsoft, served as emcee. In addition to remarks from Davis, there were speeches from Deputy Superintendent Carolyn Turk, high school sophomore Ruth Densamo and a video link to remarks by Young.

Turk, self-described as a “proud graduate of the Cambridge Public Schools,” described Smith as “our Cambridge treasure,” citing his enthusiasm and commitment to urban youth development.

Young, in his remarks, cited Smith’s appointment as the “dawn of new leadership in a school known for its focus on academic excellence and social justice” and shared some student observations about Smith: “He is cool … he is everywhere … he is awesome … a good role model” and saw them as evidence of Smith’s “genuine connection” to students.

School Committee member Marc McGovern said that “as a CRLS graduate and most importantly, as a CRLS parent, I am thrilled that we have such an intelligent, compassionate leader as Damon Smith leading the city’s only public high school.”

Organized by Celebrate CRLS, the event marked not only Smith’s new role but also another transformation: the completion of the multimillion-dollar renovation of the school, War Memorial athletic complex and neighboring Cambridge Public Library. Celebrate CRLS, co-chaired by former Cambridge mayor Frank Duehay and parent Andy Farrar, aims to engage the entire community in an ongoing recognition of the successes of the high school — academic, athletic and social — and build a base of support for the school from alumni, business leaders and residents.

Betsy Grady has been chairwoman of Celebrate CRLS’ public affairs committee and a history teacher at the high school.