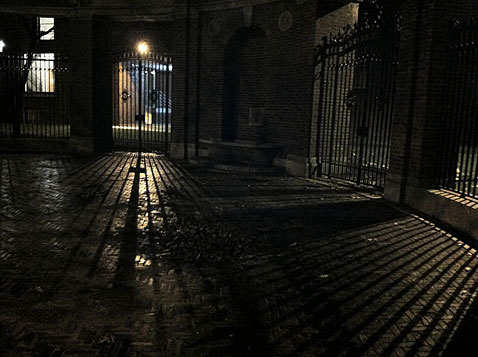 A rape was reported Aug. 10 in Harvard Yard, followed by one nearby four days later. (Photo: cheshirekat)

Two reported rapes in and near Harvard Yard were reported last week, with police saying there were two separate assailants. The first rape was at 3:15 a.m. Aug. 10 in Harvard Yard, with the assailant described as a “very tanned, possibly Hispanic male, mid-20s, 5’7” in height, medium build, dark hair, wearing a white shirt.” The second rape came shortly after 11 p.m. Tuesday around Oxford and Kirkland streets at the hands of a white man in his mid-20s, 5-feet, 6-inches, thin build, with dark “spikey” hair, wearing dark pants.

While some four students a year report rape by someone they know, the pair of stranger rapes were the first reported on campus in more than a dozen years, Harvard Police spokesman Steven G. Catalano told The Harvard Crimson. The victims last week weren’t affiliated with Harvard.

The Boston Globe’s eye on Cambridge tech sees that Aerva Inc.in Central Square is the “digital signage” company set to collect, screen and transmit the thousands of vows of good works to be seen online and on dedicated video screens in New York City as part of 9/11 Day.

“From 9 a.m. to 1 p.m. on [Sept. 11], users anywhere in the world will be able to send photos and simple pledges, each beginning with the phrase ‘I will …’ to [email protected] or the Twitter handle @911Day,” the Globe’s Dan Adam writes. “Aerva employees in Cambridge will sift through the deluge of incoming images and text. Once approved, images will be sent back to Times Square, looming over the street for about eight seconds each.”

Aerva’s work is donated, as it was last year.

Also in the Globe: A travel startup named Hopper (founded by executives from Expedia and Newton’s TripAdvisor) has raised $12 million in a new round of venture capital, including from Atlas Venture of Cambridge, for a total $22 million.

“The company will use the latest round of funding to continue building its travel search and vacation planning website, expected to launch later this year, and to double its staff of about 10 people in Cambridge over the next year,” says the Globe’s Michael B. Farrell.

[Frederic Lalonde, Hopper’s chief executive,] relocated Hopper to Cambridge in July to take advantage of the software engineering talent in the area, and because of the concentration of travel technology companies …  And Hopper will have some big competition — especially from Google, which bought ITA Software for $700 million in 2010, and acquired Frommer’s travel guides for a reported $23 million this week.

On Gawker Media’s Lifehacker site, meanwhile, a reader named Troubled by Tablets asks whether consumers of the published word worried about eyestrain and other problems are “better off getting an e-Ink device like the Kindle or the Nook.” The site’s Whitson Gordon replies that, his own anecdotal experience aside, “all the research I could find on e-Ink claims that they don’t offer any eyestrain benefits over LCDs.”

He goes on to explain the virtues of Apple iPad-style screens versus those made by e-Ink, the Alewife-area company that makes virtually every e-reader screen.