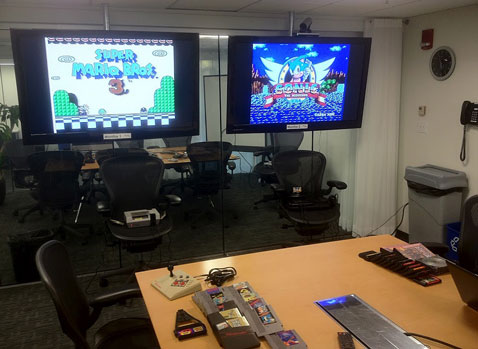 “Super Mario Bros. 3″ and “Sonic the Hedgehog” are ready to play at the May installment of Classic Video Game Night at the Cambridge Innovation Center. (Photo: Jon Prusik)

In the realm of great Cambridge monthly events, Classic Video Game Night at the Cambridge Innovation Center is right up there with Nerd Nite and even cooler than the (admittedly fake) running of the hippies.

It is also coming up sooner than Nerd Nite (which is Monday): 5:30 to 8p.m. Wednesday at the center, on the fourth floor of One Broadway in Kendall Square.

Described by organizer Jon Prusik as “an open, free-play video gaming event celebrating the golden age of gaming, open to veterans and newcomers alike,” Classic Video Game Night this time around features some 18 games for the Atari 2600, 33 for the Nintendo Entertainment System, 11 games for Super Nintendo Entertainment System, 11 for the Sega Genesis, 13 for Nintendo 64 and a smattering of others for other systems, everything from “Adventure,” “Frogger” and the infamous “E.T.” to “Doom,” “Zelda II: The Adventures of Link” and “Knuckles Chaotix.”

Monday’s Nerd Nite at 8 p.m. at the Middlesex Lounge, 315 Massachusetts Ave., Central Square, by the way, features the talks “Edvard Munch: His Life and Work In Context” by David Curcio and “Sh*t [nerds] say: Just what the hell is a snowclone anyway?” by Tim Sullivan.