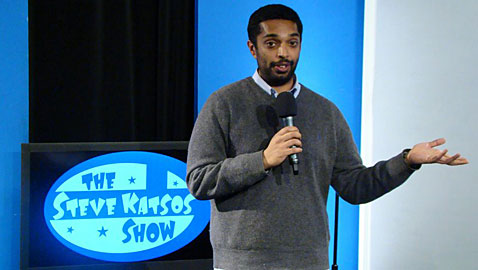 Raj Sivaraman performs in May on “The Steve Katsos Show,” a platform for many local comedians. (Photo: Brian Fiore)

Raj Sivaraman has posted a comedian’s manifesto encouraging fellow practitioners to embrace social media and make their own opportunities, rather than rely on traditional gatekeepers such as television “when fewer and fewer people are consuming television in a traditional way.”

More than anything, he urges comedians not to become bitter and to take it out on other comedians, and he has a few tenets looking at similar issues, starting with “Do nothing that will harm the career of another comedian” and asking that comics serve as feedback and boosters for each other, being productive and not destructive.

“We need to appreciate that it’s only through promoting other comedians do we make comedy better,” Sivaraman said, asking that the tenets be used “to bring us together as a community.”

After a Facebook posting, other comedians weighed in. Leading the commentary was Sean Sullivan, who noted:

just because technology has made it easier for people to make videos and podcasts doesn’t mean that we’re living in a golden age; it just means that the stuff that deserves to break through is going to have to wade through more shit and potentially never get seen.

Sullivan further lived up to his rep as acerbic truth-teller in taking on Sivaraman’s “community” approach directly:

“I feel like I should get it printed on a T-shirt … ‘Just because you want to be a comedian, doesn’t mean you get to be a comedian.’ I really don’t buy into this whole ‘Everything’s awesome and at least you’re trying, man, and let’s hug, we’re all great’ philosophy,” Sullivan said.

Of course, as soon as comedians show up trying to be funny in the Facebook conversation, the thread gets a little harder to follow in earnest. But for people in the community, however that’s defined, the conversation is worth a look.