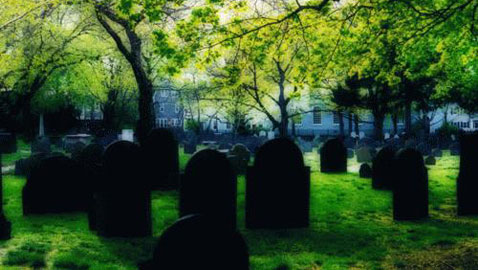 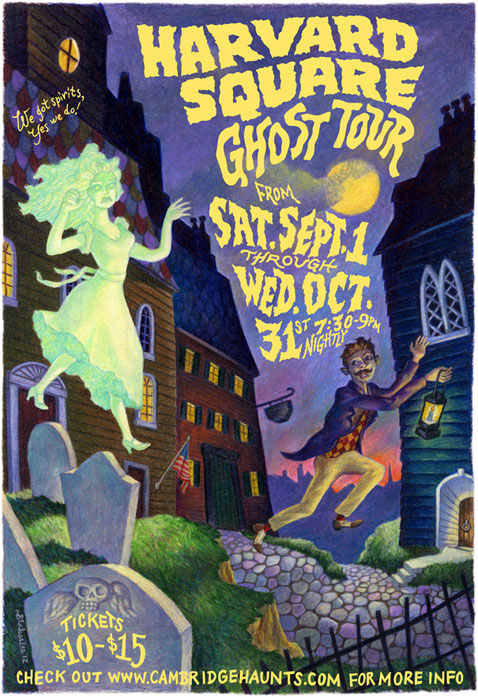 Those already thinking about Halloween will be happy to hear there are hauntings throughout Cambridge. Things get particularly hot in Harvard Square, though, as journalist Sam Baltrusis can attest. Not only has he put extensive research into his book “Ghosts of Boston: Haunts of the Hub” coming out Sept. 11; he’s running a “Cambridge Haunts: Harvard Square Ghost Tour” through Oct. 31.

It promises to be “one of the creepier, and historically accurate, tours around this Halloween season,” Baltrusis says. “Yes, fact is stranger than fiction.”

The 90-minute Harvard Scare walking tours starts at 7:30 p.m. seven nights a week,  rain or shine, says Baltrusis, who lives in Davis Square (with, he says, “a mischievous, female spirit with an affinity for sharp objects” he calls Scissor Sister). The tour poster, by artist and musician Dan Blakeslee, is above.

Baltrusis is a freelancer for Boston Spirit magazine, Stuff and various other publications as well as a teacher at the Boston Center for Adult Education and — most importantly for scare fans — has experience as a tour guide with Haunted Boston. Some of the stories he’s uncovered and promises for the tour:

“Boston’s rich history and the singular fact that it was the cornerstone of the American Revolution makes it a city that is truly one of a kind,” says Adam Berry from the SyFy cable channel’s “Ghost Hunters” show in a book cover blurb. “Why would anyone want to leave … even after they’re dead?”

“Ghosts of Boston: Haunts of the Hub,” published by The History Press, is available for pre-order on sites such as B&N and Amazon and from independent booksellers. A Cambridge book signing is scheduled for 7 p.m. Oct. 8 at the Harvard Coop, 1400 Massachusetts Ave., Harvard Square.

Tickets are available here for pre-order and the Groupon for the ghost tour is here.