Thursday’s ‘Literary Lovelies’ gets heroines on a Vaudeville stage, where some take it off 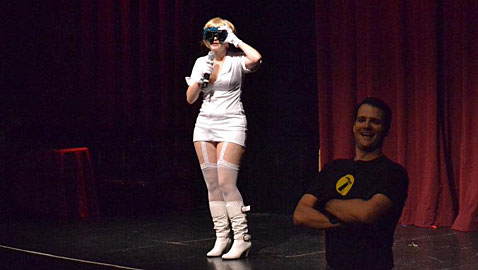 Thursday’s ‘Literary Lovelies’ gets heroines on a Vaudeville stage, where some take it off

Amy Macabre performs as Dr. Horrible in “The Tardis Tease” at Harvard Square’s Oberon in September 2011. On Thursday she’ll be back as Effie Trinket of “The Hunger Games.”

The death of books? Nonsense. Not even Vaudeville is dead, and for proof you can stop by Oberon in Harvard Square, where the two will be partying all Thursday night in “Literary Lovelies,” a presentation of Geek Girl Boston — the troupe behind sexy science fiction shows “The Tardis Tease” in September and “Space Case Burlesque” in February.

Billed as “salacious celebration of all things nerdy,” the evening vows to bring everyone from Hester Prynne to Katniss Everdeen onstage, some stripping, some not.

“It’s a Vaudeville-style variety show, very much what you would find in the classic era of burlesque,” said Amy Macabre, the writer, model and performer hosting Thursday’s show (mostly as herself but, in keeping with the literary spirit of the affair, appearing as Effie Trinket of “The Hunger Games” as well). “The show is a quarter burlesque, with circus acts, comedy and a full music set — burlesque, but a more classic burlesque.”

Performers include Fonda Feeling, Brandy Wine, Lilly Bourdeaux, Lady Lapin, Samara, Malice in Wonderland, Penny Candy, the band WHY ARE THOSE GIRLS SO LOUD it’s cos we’re jewish and TJ Horn, drummer in five rock bands including Walter Sickert & the Army of Broken Toys, who is billed as reading fanfic in a “velvety voice.” (Living tributes to Doctor Who — apparently left over from “The Tardis Tease” — are also rumored to be roaming the event.)

Before the dance party, though, “I will close the show by reciting shakespeare in my underwear,” Macabre said, “fulfilling one of my life’s dreams.”

Doors are at 7:30 p.m. and the show begins at 8 p.m. Tickets are $10 for standing and $15 for seats, available here, and tips for the performers are encouraged.