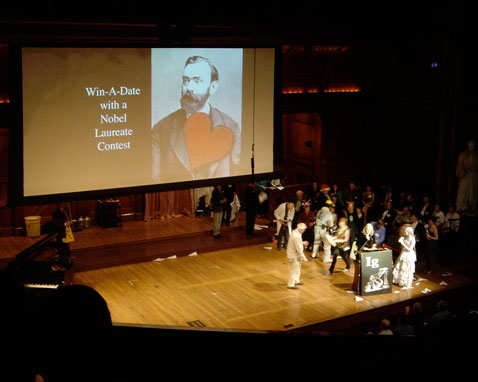 The Ig Nobel Prizes ceremony gets to its Win-a-Date-with-a-Nobel-Laureate Contest in 2006 at Harvard University’s Sanders Theatre, which will host the ceremony — and contest — again Sept. 20. (Photo: Jeff Dlouhy)

The 2012 Ig Nobel Prize winners will be announced — and showered with applause and paper airplanes — Sept. 20 at Harvard University, honored for achievements that first make people laugh, then make them think.

It’s being called the 22nd First Annual Ig Nobel Prize Ceremony by Marc Abrahams, host of the event and editor of the science humor magazine Annals of Improbable Research, the organizer of the awards in cooperation with several Harvard student groups.

“It celebrates the unusual, honors the imaginative and spurs interest in science,” Abrahams said of the awards.

The identity of the winners is secret until they get their prize on stage, but Abrahams said they are coming from five continents. Despite that, their acceptance speeches will be brief — with time limits being enforced “by a stoic, very cute 8-year-old girl,” he said — after the prizes are handed to them by genuine Nobel laureates. Scheduled to attend the ceremony are Dudley Herschbach (chemistry, 1986), Rich Roberts (physiology or medicine, 1993), Jack Szostak (physiology or medicine, 2009), and Roy Glauber (physics, 2005).

“One of them will also be the prize in the Win-a-Date-with-a-Nobel-Laureate Contest,” he said.

Last year honorees included the Japanese inventors of the wasabi-fume fire alarm that awakens deaf people; the biologists who discovered that a certain kind of beetle mates with a certain kind of Australian beer bottle; and the mayor of Vilnius, Lithuania, who demonstrated that the problem of illegally parked luxury cars can be solved by running them over with an armored tank.

The ceremony is also to include “The Intelligent Designer and the Universe,” a new four-act mini-opera starring Maria Ferrante; and a pre-ceremony mini-concert by Japan’s Keromin Orchestra, making its U.S. debut.

The ceremony will be streamed here, and webcast-watching parties are planned around the world, Abrahams said, including a grand, middle-of-the-night event at a theater in Leiden, The Netherlands. (There is also a Twitter hashtag: #IgNobel.)

This year’s ceremony also celebrates the publication of Abrahams’s latest book, “This Is Improbable,” and includes the traditional follow-up event to the awards, The Ig Informal Lectures. These short public talks by the new Ig Nobel Prize winners — usually used to expand on the scientific findings and take questions — are free and open to the public, but seating is limited. They are held at 1 p.m. Sept. 22 in MIT building 10, room 250.