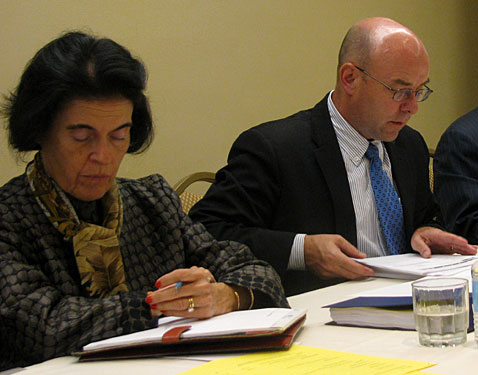 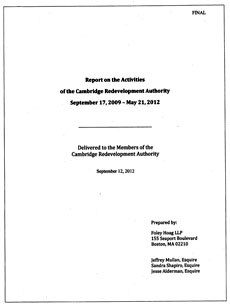 Foley Hoag’s report can be read as a PDF by clicking on this image.

The law firm Foley Hoag has filed a shoddy and disgraceful review of the recent two years and eight months there was no leadership at the Cambridge Redevelopment Authority, when executive director Joseph F. Tulimieri was free to act however he saw fit.

Its authors — the firm’s Jeffrey Mullan, Sandra Shapiro and Jesse Alderman — should be ashamed of a report that indulges in a variety of clumsy techniques that knowingly or otherwise serve to absolve Tulimieri and Shapiro (whom Tulimieri and Mullan have acknowledged was legal counsel during that nearly three-year period) of responsibility for Tulimieri’s actions and their failure to alert City Manager Robert W. Healy or anyone that there was not a single active board member.

This will surprise anyone who thought the city couldn’t do worse than hire Ropes & Gray. That Boston law firm lost some $14.6 million of the city’s money to civil rights accusations stemming from court cases stretching over more than a decade, despite councillors claiming that “what the plaintiff did was egregious” and the public would understand because “at some point those facts will come out.” (Still waiting.)

First, nowhere in this farcical report’s 113 pages does it address how Tulimieri or Shapiro made it through more than two years of doing CRA business without thinking to remind someone they needed a board. There are five board members; a quorum is three; as the months and years passed, Tulimieri and Shapiro had zero active members.

Tulimieri recounted in August how the authority couldn’t submit the most recent audit of its finances because “we did not have a member of the authority available to sign,” and his expanded answer was even more troubling — that board members chose not to sign, and when Tulimieri found a board member who would, “the auditor chose not to use it.”

That’s a big, burning red flag, but neither Tulimieri nor Shapiro treated it as such, and neither does this Foley Hoag report.

It’s almost as though this financial audit didn’t matter. (Maybe it doesn’t. After all, the authority hasn’t had an official budget for three years and apparently doesn’t have one now, since the reconstituted board hasn’t voted on it.) In the rest of the world, an audit is done to ensure finances are in order, and an auditor who demands a board member signature and refuses the one offered might be asked to explain why. But for the authority, an official budget seems voluntary and an audit can be done but never filed with no more concern than lab results need worry a Christian Scientist.

Bad enough the law firm should have been investigating its own employee. This lame Foley Hoag report never bothers to examine why Tulimieri or Shapiro didn’t take the obvious, common-sense step of asking for new appointees to the board, apparently because in the eyes of Mullan, Shapiro and Alderman the executive director had authority to do whatever he was doing for those two years and eight months.

Obviously that begs the question of why board members are needed at all. But on what is the conclusion based? The document points — kind of — to two documents: the authority’s own bylaws and Section 121B of the Massachusetts General Laws.

Both are on the report’s pages 6 and 28, although the citations lead to Section 4, a discussion of creating a redevelopment authority. It’s probably a typo, since there’s no more justification for Tulimieri’s actions here than there is in the Biblical Book of Genesis; yet the trio from Foley Hoag do it again by pointing to Section 10 of the authority’s bylaws, which says only that the authority “may from time to time employ such personnel it deems necessary to exercise its power, duties and functions.” This is relevant if you ignore that the appointment and role of the executive director is already dealt with in Sections 1 (the officers include “a secretary who shall be executive director”), 5 (which is all about the executive director) and 6 (about the secretary), which means it’s irrelevant. Since the powers of the executive director and secretary have already been laid out and he is permanent staff, not hired “from time to time,” why would Section 10 apply? Why would anyone think it does?

Foley Hoag keeps pointing to law as though it provides support for its opinion, but it doesn’t.

There’s also a reference on the legal report’s page 7 that yet again doesn’t get the reference correct. Follow the quote there and you’re taken to the law’s Section 47, which talks about eminent domain. What these crack legal minds are trying to point to is Section 7, referring to “officers and executive directors” of authorities.

What the lawyers lean on here and in the bylaws is that “A housing or redevelopment authority … may delegate to one or more of its members, agents or employees such powers and duties as it deems necessary or proper for the carrying out of any action determined upon by it” and that the executive director is “charged with the management of projects.”

But the bylaws lend no support to the argument. Mullan himself said last month that “the bylaws are pretty clear, actually. [The power] does lie with the authority,” even as he insisted that Tulimieri acted on “custom.”

So the references simply look like they add a few sentences’ worth of heft to a report that has an immense amount of nothing to say, and it highlights the fact that for lawyers, Mullan, Shapiro and Alderman seem awfully uninterested in the power of the document. They do not offer a single one, nor even a single sentence from a single document, to show that power to accept, craft and especially to present an original project to the City Council has been bestowed upon Tulimieri.

To “manage” is to administer, not originate, and if they’re going to cite Section 7 they should acknowledge that it ends by saying delegation by the authority’s board is “for the carrying out of any action determined upon by it.”

Coming up with a document granting Tulimieri this power shouldn’t be difficult; he is, after all, secretary. And it’s obvious the granting of power must have come before the old board’s quorumless final meeting, March 17, 2010.

At that meeting there were votes taken, including a 10-year extension of the Urban Renewal Plan that underpins what the authority does, but “actions taken in the absence of a quorum do not survive,” the lawyers say on Page 3 of the Sept. 12 report, “have no legal effect, and must be treated as if they never occurred.” In addition to extending the Urban Renewal Plan

the board also voted in favor of various administrative actions, including actions related to third-party contracts and personnel actions. Because these votes took place at a meeting during which a quorum of the members was not present, these votes must be treated as if they never occurred.

Simple enough: The bylaws have language making clear that actions taken even by existing board members at the start of the “quiet period” never officially happened. So why don’t the lawyers also find actual language granting Tulimieri the powers he claimed from the time of that final meeting to the activation of the new board members May 21?

Fine. Then Foley Hoag and Tulimieri should be able to show that, if the powers Tulimieri has been using are truly his to use by custom, he has been using them all along — that even when the board was constituted in years past, the executive secretary was given the power to “manage” a project by accepting, crafting and presenting it to the council without the board weighing in.

Again, finding this precedent shouldn’t be too hard. The Foley Hoag lawyers have done the research and they have the resources of Tulimieri himself, who has been executive director and secretary for three decades, to show “custom” in the absence of documentation actually granting those powers.

If there is no precedent before the “quiet period” we’re back where we started, which is asking why the alarm wasn’t sounded of the need for new members.

Speaking of precedent: When those civil rights cases were being tried, Ropes & Gray charged the city $375 for an hour of a lawyer’s time, ultimately costing some $2.6 million, and one reason the total went so high was this rationale: “The city  should not set a precedent of not appealing a $6 million judgment. If the city does not appeal, what incentive is there for a plaintiff to settle? … the prudent and wise course is to appeal.” For all the high-powered legal advice that came the city’s way, the partial release of minutes from the council’s closed-door meetings doesn’t show Ropes & Gray talking about what kind of precedent is set when a city spends more than 6,900 lawyer-hours and millions of dollars appealing a supposedly slam-dunk case and loses. The city wound up paying out, not saving, because of that precedent.

What conclusions can be drawn?

Now the authority board members have to think long and hard about the precedent they’re setting by accepting Foley Hoag’s report and its conclusions. In its accounting for the two-year, eight-month “quiet period,” power resides with the executive director through undocumented custom. The bylaws are meaningful in limiting the powers of the board, but not the executive director. Budget votes don’t matter. Audits don’t matter.

It’s time to hurry his replacement. In doing so the board has to think about the statement it’s making by accepting Foley Hoag’s accounting of the power of the authority and its executive secretary and letting Tulimieri ride off into the sunset with plenty of city money, exonerated after not even being legitimately questioned. Unfortunately, this (and a total lack of real answers and guidance) is what Foley Hoag has handed the board after two wasted months of work: detailed analysis that talks around, rather than addresses, the most obvious, useful and meaningful questions.

It raises a new question: Who is Foley Hoag serving with this report?

The authority has paid $162,522 in legal fees this year through Aug. 31. The best argument Foley Hoag has made is for its own replacement as board counsel.

The Cambridge Redevelopment Authority meets at 5:30 p.m. Wednesday in the third-floor Endeavor Room at the Boston Marriott Cambridge, 50 Broadway, Kendall Square. That address is also known as 2 Cambridge Center.