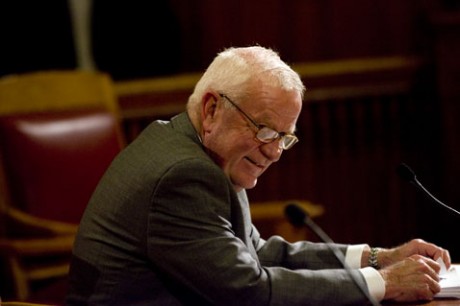 City Manager Robert W. Healy has reported that the city has a record high amount in its free cash fund for the second year in a row. (Photo: Rachel Offerdahl)

Cambridge has set another record for free cash.

The city has $115.8 million — that’s $115,826,900, to be precise — in its free cash fund, also known as the unreserved fund balance account, according to a communication sent to the City Council by City Manager Robert W. Healy too late to be an official part of the Monday council meeting.

This beats the record high announced by Healy a year ago at this time, when $100.2 million was the “highest free cash balance in the history of the city” and represented a $12.9 million increase over the previous year.

The current free cash amount is also a surprising bump from the city’s 2012-13 budget book, which projected there would be only $90.9 million in the fund for each of fiscal years 2012 and 2013.

And it comes after $11.9 million was transferred in April for the legal costs of civil rights lawsuits against the city, City Auditor James Monagle said Tuesday. That suggests the city not only recouped an $11.9 million loss from free cash that brought it roughly to that projected $90.9 million, but added enough revenue — with city property owners seeing only a 1.75 percent increase in their tax levy and no increase in water and sewer rates — to jump somewhere in the area of $25 million to the current level.

According to state Department of Revenue records, only Boston’s free cash was higher in fiscal year 2012, with its 625,087 residents enjoying free cash of $142.8 million, but Cambridge’s recorded $102.2 million was head, shoulders and torso above the third-highest community, Lynn, and its $16.8 million. For fiscal year 2013, only 42 communities have reported out of the previous year’s 346, but Cambridge’s projected income again soared over the highest on the spreadsheet: Arlington, at $7.8 million.

How did Cambridge do it? Monagle said he was preparing an analysis that would be ready in about a week but could not talk about it until then. A message was left Tuesday with Healy and his staff seeking information.

Free cash is money left over from the previous fiscal year that is “available for appropriation,” according to the city budget book submitted by Healy. But the city follows a philosophy that appropriating the money means having less money, to the extent that councillors voted 7-2 in March to give away 40 percent of a rooftop garden in Kendall Square in exchange for $2.3 million in design and improvements to two ground-level city parks. That’s 1.9 percent of the city’s free cash, or less than 9 percent of what the city managed to raise in a year to achieve the current record amount of free cash.

Now councillors are looking for an annual $400,000 to keep an Upward Bound program running since the surprise loss of a federal grant. The program, which works with the Massachusetts Institute of Technology and Wellesley College to help high school kids achieve educational goals, cannot apply for the grant again for another five years, according to testimony at Monday’s council meeting, and councillors have spoken for two meetings straight about their interest in finding money to keep the program intact.

Healy has long been recognized for his skill in guiding Cambridge’s finances and earning the city top ranking from credit rating agencies. He retires next year.