Comedy show comes up from the underground, arrives at Middlesex Lounge 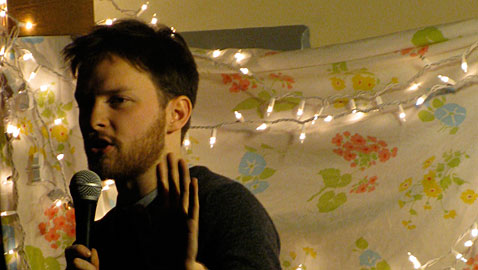 Comedy show comes up from the underground, arrives at Middlesex Lounge

Its home as of Oct. 17: Middlesex Lounge, near Central Square, with free admission and a (legal) bar.

The show started modestly in March 2011 upstairs at Rodney’s Bookstore in Central Square, but word of mouth began drawing powerful numbers of what are invariably described as hipsters by the comics Douglass books for the show. (Including Harry Gordon, seen with Douglass in the video above.) The crowds stayed even as the second story of the bookstore was taken over by a neighboring tech company’s expansion and the show entered its second year bouncing around venues such as the Bishop Allen Drive Elks Lodge and Outpost 186 in Inman Square.

“Finally, this beautiful underground comedy show doesn’t have to run in secrecy in fear of Cambridge police walking into a bookshop full of PBRs and saying ‘What the fuck,’” Douglass said in a press release.

Comics for the first show include D.L. Polonsky, Sinus Brady and Chris Morrill.