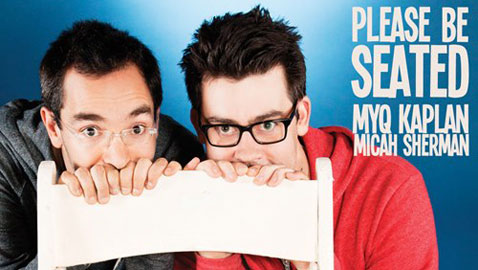 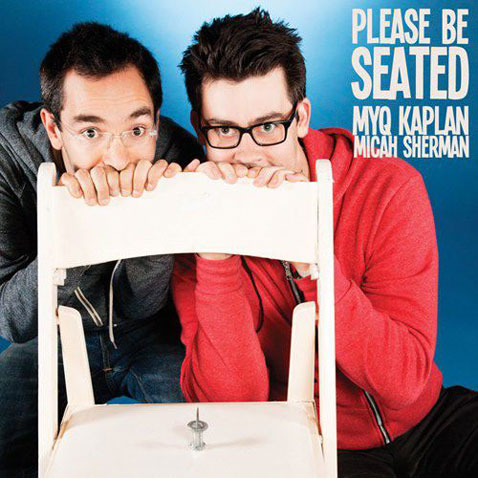 Your album has been released.

That is, the comedy music album recorded Dec. 13-14 by Myq Kaplan and Micah Sherman before two packed audiences at ImprovBoston in Central Square is out, along with two videos of songs from the album. And the audience sounds great.

Also great, and getting matching reviews from comedy-minded websites such as Splitsider, Laughspin and the Laugh Button, is the entirety of the 22-track “Please Be Seated.” The Onion’s A.V. Club gave the album a B, to which readers (and listeners) responded, “B plus!” And Huffington Post are playing up the “Comedian’s National Anthem” for Kaplan and Sherman’s accomplishment at fitting “catchphrases from the likes of Jerry Seinfeld, Chris Rock and pretty much every other standup comic from the last half-century” into a mere 1 minutes and 51 seconds.

The other video is “Bop 25,” a tidy 3 minutes and 43 seconds of blatant pandering to score radio play with an earnest environmental message crammed between the singers’ scarily effective use of the word “bop” 96 times. (Splitsider counted.) As reviewer Daniel Crown says,

Those that have heard “Bop 25” can likely relate; the song sticks stubbornly in the mind. Clearly satirical, it’s nonetheless a true toe-tapper. It’s also a perfect example of what its writers can bring to the world of musical comedy.

Laughspin’s Brian Piccolo agrees, praising the duo for helping redeem “the historically schlocky subgenre” of musical comedy, joining the rare act such as Garfunkel and Oates in making it into “something intelligent and consistently funny.” But the sites are uniformly admiring of the skills shown by the duo in sheer comedy as well as musical ability.

Anyone who was at ImprovBoston in December — because the New York comedians returned to Cambridge for the recordings — doesn’t need a reviewer to tell them how good Kaplan and Sherman are, though, or about the strength of the material from “Please Be Seated.” And anyone who wants to relive the night can find the album on iTunes and Amazon. Their applause and laughter remains in the mix.