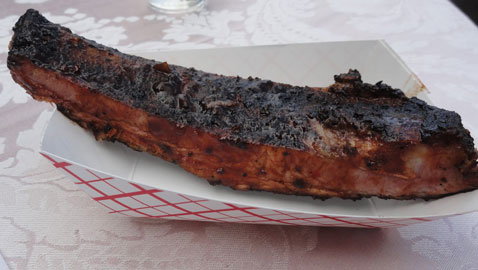 The votes are in — meaning in the stomachs of thousands of visitors to the “Smoke This” Rib Fest held Sunday in East Cambridge — and the makers of best ribs have been awarded.

The judges, however, had others in mind for their awards: Students at the Cambridge Rindge & Latin School took third, Tupelo took second and Bambara was the first-place winner.

“I’m so happy and proud [for] our own students from the Cambridge Rindge & Latin School school of culinary arts. They placed third out of 21 restaurants and were ecstatic over receiving that recognition,” city councillor Tim Toomey said Monday in introducing a resolution of congratulations for the association and its event.

The judges were chef Tony Maws, of Craigie on Main, Kenji Alt, of the website Serious Eats and Dave Andelman, of The Phantom Gourmet.

“It is very interesting that the celebrity judges and the public did not choose any of the same winners. That shows how tastes can vary significantly,” said Stoneham’s Richard Auffrey, the blogger behind The Passionate Foodie and one of three food bloggers helping judge at the event. “I sampled 20 different ribs, which is a great and tasty way to spend any day. I would have tasted 21 ribs, but unfortunately one restaurant ran out of ribs early.”

The other bloggers were Erica of In and Around Town and William McAdoo of The Boston Foodie.

“It was flawless, the whole thing, just an incredibly great event for everybody,” Toomey said. “It’s becoming the place to be the third weekend in October.”