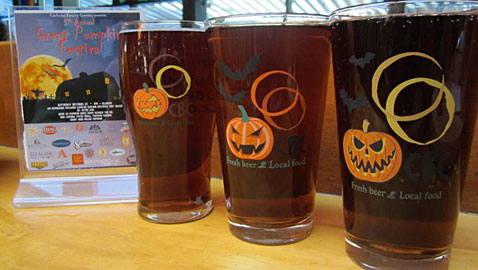 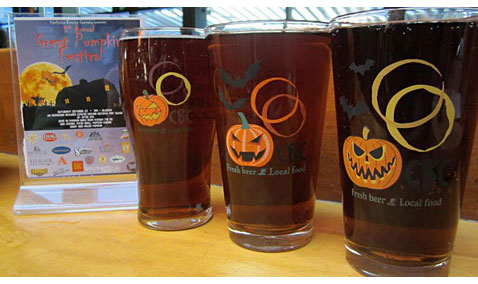 Drink (and eat) some pumpkin at the Cambridge Brewing Co.’s Great Pumpkin Festival. Who says Kendall Square is dead? From 1 p.m. Saturday to 12:30 a.m. Sunday the 1 Kendall Square, restaurant and brewery hosts a festival that proves that image wrong.

The nearly 12-hour party — with a pumpkin processional and costumed staff — is expected to host upward of 40 pumpkin beers from breweries such as Elysian, Iron Hill, Dogfish Head and Allagash as well as the locals’ own Great Pumpkin Ale and other pumpkin libations (including White Widow IPA, “the pumpkin beer for people who hate pumpkin beer”); there will also be a pumpkin-inspired menu from executive chef David Drew that includes a patio grill menu with bratwurst on pretzel rolls with Pumpkin Ale mustard and pumpkin flatbreads with pumpkin-seed pesto, pickled onions, smoked mushrooms and gouda and, inside, roasted pumpkin bisque, pumpkin ravioli and risotto, roasted pumpkin polenta fries, Ipswich pork scrapple on griddled pumpkin bread and a dessert of pumpkin bread pudding with butterscotch sauce and vanilla bean ice cream. Whew.

Admission is $10 at the door, with beer and food tickets available four for $5 inside. The price includes a limited-edition Great Pumpkin Festival pint glass. Children and others under 21 are welcome from 1 to 5 p.m. For information, call (617) 494-1994 or click here. 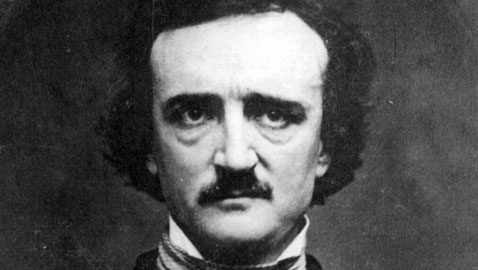 Talk to Edgar Allan Poe in a cemetery. Mount Auburn Cemetery’s breathtaking Bigelow Chapel plays host to Edgar Allan Poe himself (portrayed by local literary historian Rob Velella) at 6 p.m. Saturday. The author of everything from the horror of “The Tell-Tale Heart” to the seminal mystery of “The Murders in the Rue Morgue” to the poetry of “Annabel Lee” will be reading from his classic works and giving classical-meets-pop composer Mary Bichner the stage to perform his “To Helen” in aria form.

Poe will also be talking about his dead friends around Mount Auburn and his contentious relationship with Boston, where he was born and was drawn back to, like an angry and depressed moth — and which reviled as home to a bunch of “Frogpondians.”

The family-friendly talk, readings, musical accompaniment and question-and-answer period are at 580 Mount Auburn St. Tickets are $10 for members of the Friends of Mount Auburn or $15 for nonmembers, and can be bought via the Mount Auburn website. For information, send e-mail to [email protected] or visit the event Web page. 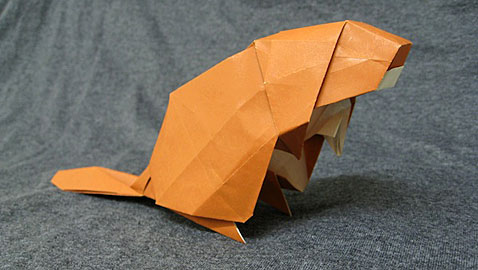 Get all wrapped up in an origami convention. OrigaMIT, the origami group at the Massachusetts Institute of Technology, holds its second annual convention from 9 a.m. to 10 p.m. Saturday — a length that just begins to suggest how hardcore this is. (And if it doesn’t, the $30 price will.) There are some 28 classes and six lectures scheduled, and people are coming in from all over to learn, teach, shop, check out an exhibition or just talk about the ancient, intricate art of paper folding. The event is contained in the university’s Stratton Student Center, 84 Massachusetts Ave. More information is here.

Run like a superhero (or watch a bunch of people in costumes run a 5k). The fourth annual Superhero 5K starts at 10 a.m. Sunday in Cambridgeport’s Pacific Street Park, typically packed solid with runners in everything from capes, cowls and masks to drag, Teenage Mutant Ninja Turtles shells and full-body green man outfits (à la “It’s Always Sunny in Philadelphia”). In addition to seeing who’s fastest — some people sign up as “Heroes vs. Villains” teams, in which two runners dress as good and bud guys and race each other to see who finishes first — runners also compete for a best-costume prize of $1,500.

Part of the cost of signing up on run day — like a portion of all proceeds from the event — goes to On The Rise, a Cambridge nonprofit day program for homeless or in-crisis women. The race is organized by Boston-based Have2Run Productions. The cost for a single hero: $35. Registration is from 8:30 to 9:45 a.m., when there’s a free 50-yard dash for kids.

The park is down Sidney Street near Central Square. To get there from Massachusetts Avenue, participants and visitors must pass by a green space called University Park Commons, as — to make matters more confusing — the event is held within an area known as University Park. A map is here. The mostly flat course takes runners toward Harvard Square and back. For information, click here. 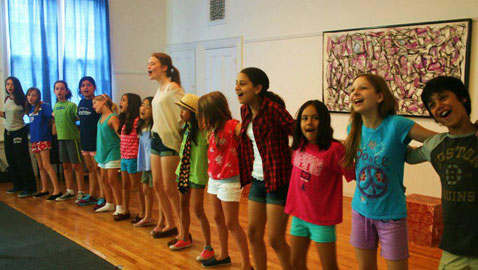 Take the kids to a free (and potentially musical) Halloween festival. Or two. If you and your kids are looking for simple pumpkin decorating, candy bag making, face painting, ring toss and treats for those 8 and under in costume on Sunday, try the 1 to 3 p.m. Halloween Carnival right at the Harvard Coop, 1400 Massachusetts Ave., Harvard Square.

If you want to add a bit of song to your Sunday, head over to The New School of Music between 5 to 6:30 p.m., where there will be an all-ages “Trick or Treat to the Beat” musical Halloween open house.

The open house invites families — especially in costume — to trick-or-treat in the music studios, try an instrument in its “petting zoo” and sing along with a concert. The event is free, with “donations graciously accepted” at the school, 25 Lowell St. For information, call (617) 592-8105 or click here.