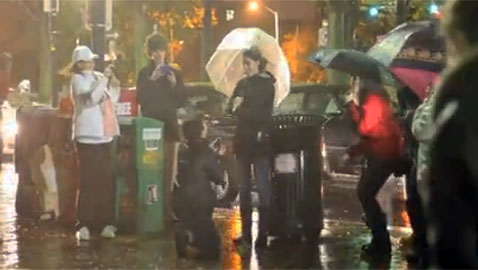 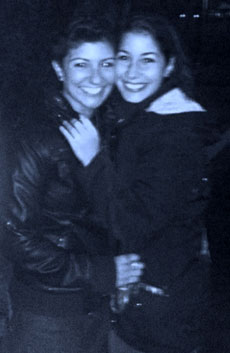 Rosana Gambino and Jerilyn Sawyer in a photo taken just after Gambino proposed during a Harvard Square dance routine.

Brookline residents Rosana Gambino and Jerilyn Sawyer were in town Sunday to take a Harvard Square Ghost Tour on a Groupon. “She loves Halloween,” Gambino said of her partner. In fact, their first date was a ghost tour in Newport, R.I.

Thinking the tour would be a perfect time to propose, Gambino long ago convinced family members to join in the Groupon and come along — then went about recruiting dancers from among the troupes at her school, Northeastern, and the help of choreographer friend Briana Tartaglione and DJ Leah V, who spins at Zuzu in Central Square on Tuesdays. She cut a track for the dancers, brought a truck with speakers and even supplied a friend who could work a video camera.

Rehearsals went throughout October, Gambino said, and about 15 dancers wound up participating — first trickling out onto the brick sidewalk outside the First Parish Church by the Old Burial Ground as though to entertain Gambino and Sawyer while they waited for the tour to start. The video, which starts just as the dancing does, shows one dancer, then three and then a half-dozen, gaining steam and numbers before at about two and a half minutes in, Gambino leaves Sawyer’s side and joins them in the performance.

The couple had been bickering that day, and Gambino said she was incredibly nervous to step out and start dancing, let alone to propose.

Not helping matters: “My mother and I turn to look at Jerilyn’s expression to see if she is intrigued by the beginnings of a flashmob,” Gambino recounted in a blog post. “The only look on her face is … disinterested.”

Nonetheless, Gambino joined the flashmob and, as DJ Leah V segued to Bruno Mars’ “Marry You,” at about three minutes, 20 seconds in, dropped to one knee on Sandy-soaked sidewalk and actually proposed. Sawyer leaned down and kissed her as some 30 family members and passers-by applauded. Later, the group went to First Printer Restaurant for a celebratory meal.

The dancing, flashmob marriage proposal isn’t unique. Even using “Marry You” as part of it isn’t. The trend got attention from The New York Times this summer, in an item by Ji Hyun Lee that teeters between anthropological and romantic:

A certain breed of men, and some women, look upon marriage proposals not as an intimate moment between two people, but as an opportunity for a very public, and recordable, display of affection. … when flash mobs come crashing, with swoon-worthy tunes like Bruno Mars’s “Marry You” and choreographed routines by dancers who quickly assemble and just as quickly disperse, the sum is quite often a cinematic moment that is fleeting but everlasting. Even hard-core cynics can be left feeling a little choked up.

But for Gambino, who said she met Berklee College of Music student Sawyer about a year ago and moved in with her six months ago, it doesn’t even seem to be a question. “Why” isn’t an entry on the blog she started to record her thoughts and progress in proposing. (It does include a shout-out for the tour that provided the backdrop. “I spoke with the guy from the haunted tour we are going on that night and he was sooo happy,” Gambino wrote of author and tour organizer Sam Baltrusis. “Apparently they are very gay friendly, so go Cambridge Haunts!”)

If nothing else, it makes for a great story for Cambridge and the couple.

“She had no idea,” Gambino said of Sawyer, recalling the moment of the proposal. “She didn’t even know why I started dancing. She just assumed I was being crazy and wanted to dance.”

“I’m down on one knee, asking the girl that changed my life to let me be in hers forever,” Gambino recalled. “I will never forget that moment and all of the people that made it possible. I honestly would not change one thing about that day and, luckily, neither would she.”