Nominations open for next poet populist 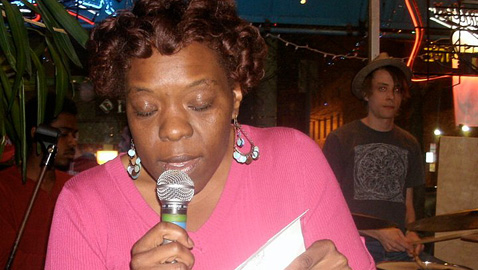 Nominations open for next poet populist

Toni Bee performs at The Middle East in June 2001, shortly after beginning her two-year term as poet populist of Cambridge.

With a presidential election behind them, Cambridge residents can turn their attention to nominations for another important office: poet populist.

Nominations for the next poet populist are open through Jan. 11, with Toni Bee continuing in the position through May.

The Cambridge Poet Populist is a two-year, informal office — albeit one honored in an official capacity, getting a stipend and expected to maintain a schedule of public appearances — developed in 2007 to celebrate the creation and appreciation of poetry throughout the city. Modeled in part on one in Seattle, Cambridge’s program got started with Peter Payack and elected Jean-Dany Joachim in 2009.

Since being elected last year, Bee — a writer, photographer and community advocate and now artist fellow for the Citi Performing Arts Center in Boston — has hosted several poetry readings and writing workshops and participated in numerous Cambridge arts events and festivals. In August 2011, she opened the National Poetry Slam with The BeeCool Poetry Music MashUp; this fall, she performed at the first Kendall Square EatUp! event and emceed the Honk! festival community event at Clement Morgan Park.

“Being an official bard is swaggeriffic,” she told DigBoston in May.

Finalists will be selected in February by a panel of poets, literary professionals and community leaders appointed by the Cambridge Arts Council. They will take part in a series of public readings as part of the election process and be voted on by community members in April, which is National Poetry Month. Voting closes April 8.

The Poet Populist Program is sponsored by the city, the Cambridge Arts Council and Cambridge Public Library. For information, call the council at (617) 349-4380 or send e-mail to poetpopulist@cambridgema.gov. The council is in the Cambridge City Hall Annex, 344 Broadway, at Broadway and Inman Street.