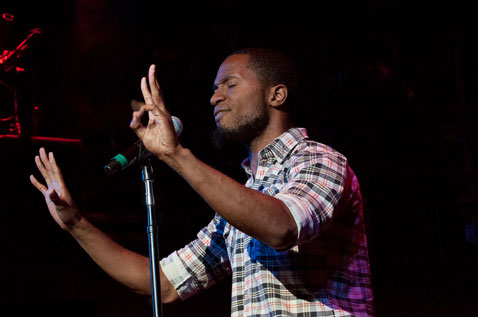 The finals for the 2011 National Poetry Slam were held at the Berklee Performance Center in Boston. Materials for next year’s event includes Somerville as well as Cambridge and Boston. (Photo: copyright Richard F. Beaubien)

Cambridge hosted the biggest National Poetry Slam in history last year, but it’s expected to be even bigger next year as it makes a surprise return.

“The 6,000 people in attendance actually turns out to be a pretty conservative estimate. We sort of redid our numbers this year and discovered it was closer to 8,000,” said Simone Beaubien, slam master of the weekly Boston Poetry Slam and organizer for the National Poetry Slam last and next year.

That makes Beaubien’s first step a scramble to find venues to hold all those people and more.

It’s a scramble because, while most National Poetry Slams have a couple of years to prepare, Cambridge took on the responsibility in March, after Chicago backed out officially in February.

Because of other events coming to the area within a few weeks of the expected slam date, organizers at Chicago Slam Works didn’t think they could market the event successfully. They took a vote and withdrew, said Henry Sampson, president of Poetry Slam Inc. in late February. By June, though, he was able to announce Beaubien had met with her committee from the previous year and all were “committed to working on making NPS 2013 even better than the most excellent NPS 2011 that they did such an outstanding job of running from start to finish.”

Bigger to be better

To do that, Beaubien knows she needs to do more than just make room for the usual 72 (and possibly up to 84) teams and about 350 poets; she needs to nearly double the capacity of the slam. Last year she faced a problem somewhat rare in the world of poetry, even in the world of slam-style spoken word competitions:

“Last year we had both the good fortune and, as people say, the good problem to have, that we sold out all our competition venues,” Beaubien said. “In fact, there were complaints that people were unable to get in, which is to me both mind-boggling and wonderful — that people were complaining that their favorite obscure art form had sold out and they were unable to enter.”

As a result, events that last year was held throughout Cambridge and at two venues provided by sponsor and partner the Berklee College of Music — its Cafe 939 and, for the finals, Berklee Performance Center — are to spread into Somerville’s Davis Square, with larger venues sought in all three cities. While last year the venues had a capacity of 80 to 150 people, next year the smallest has a 100-person capacity and goes up to 250 for preliminary weekend venues, she said. For the semi-finals, venues are to seat closer to 300 to 500 people to accommodate all of the paying guests, entourage, family and volunteers, “just to make sure everyone gets to see poetry and to allow our poets competing from other cities to get the biggest audience they possibly can.”

The two sites sure to be included, despite their small size, are The Cantab Lounge in Central Square, where Beaubien runs a weekly Wednesday night slam, and The Lizard Lounge on Massachusetts Avenue between Harvard and Porter Squares, where there’s a weekly Sunday night event. Other than that, she was reluctant to name sites, since they weren’t confirmed. Dates for the event are also not posted.

The champions from the 2011 event were Slam Nuba from Denver; the Nuyorican Poets Cafe team from New York City came in second, Providence Poetry Slam came in third and Writing Wrongs of Columbus, Ohio, finished fourth. This year’s event was in Charlotte, N.C., in August, with Slam New Orleans taking first, followed by the Nuyorican team, the Killeen (Texas) Poetry Slam and Da Poetry Lounge of Hollywood. The Cantab team made it to the semi-finals.

The national event is good for local poetry no matter who wins, said slam master Jeff Robinson, of the weekly Sunday night Lizard Lounge Poetry Jam. “Having the National Poetry Slam here twice within three years is definitely going to be a great thing for the poetry scene,” he said, noting the attention it puts on local poets and the people who support them. This is already one of the handful of cities able to bring more than one team to competition, and coupling the national focus with the creative regeneration brought by a constant influx of students means “we will probably be able to sustain a poetry scene up here for a long time.”

Beaubien credits huge Cambridge attendance on the “great infrastructure here in New England” — the kind that allows a rapid ramp-up for a huge event as well as the “great community of poets who visit each other from Connecticut or Providence, R.I., all the way up to Portland, Maine. It’s a huge community” — and the publicity from media such as The Associated Press and Huffington Post that attracted attention and convinced poets nationwide that it would be “an exceptionally interesting” event to be at even if they weren’t competing.

Beaubien expects it to be a powerful and highly competitive event.

“What I’m most excited about are the teams that are going to be returning to Boston, who competed here in 2011 and now understand what our audience is interested in,” she said. “They are going to look to reach that audience in a very specific way as they return to compete for the championship in 2013.”

This post was updated Dec. 19, 2012, to correct the order of winning teams from the year’s championships in Charlotte, N.C.