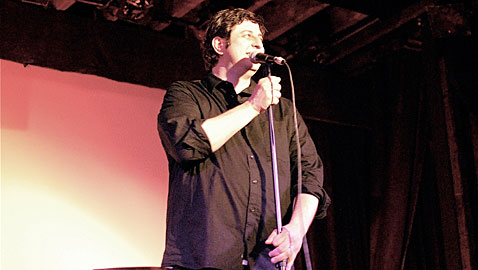 The premiere Friday of a Eugene Mirman comedy special, “Eugene Mirman: An Evening of Comedy in a Fake Underground Laboratory,” brought the requisite profile on Splitsider that goes all too briefly into his professional roots in Cambridge.

You may recognize Mirman as the landlord in “Flight of the Conchords,” as Yvgeny Mirminsky on “Delocated” or as the opener for bands or host of comedy nights at The Middle East. You may also remember a young Mirman doing comedy – as a refugee from Lexington High School or after attending Hampshire College in Amherst – at Harvard Square clubs such as Catch a Rising Star and The Comedy Studio, which he would stand outside passing out thousands of fliers in at attempt to draw customers. He started and ran a weekly comedy show at the Green Street Grille.

He also was an editor on the Boston’s Onion-like Weekly Week publication, and returns to take part in the Union Square Round Table with area comedians, musicians and other former editors. (Some “Union Square” shows have been at Middlesex Lounge in Central Square or The Brattle Theatre in Harvard Square.)

Though he moved to New York a dozen years ago, he returns frequently, telling Time Out Boston, “I get to visit friends and family, and it’s always fun to return. I guess I look forward to lots of seafood.” His choices for seafood? East Coast Grill in Inman Square and Jasper White’s Summer Shack at Alewife.

Perhaps the most surprising memory of Mirman’s time in Cambridge is of his job as receptionist and office assistant at the 101 Main St., Kendall Square, offices of the Thunder House ad agency unit. As recalled by fellow former employee Jesse Nahan:

At the time Eugene arrived, we had just gone through massive personnel cuts and were limping along with a skeleton staff. While Eugene did a fine job, he also made the most of the opportunity to add his own flavor of goofiness wherever he could. I recall with a smile his wielding control over our music on hold – to things like Lou Reed’s “Metal Machine Music” – and his mock, extremely terse recorded messages for outside callers. One day he walked into my office, beaming, and announced he got a promotion. Then he unveiled his new business cards: “I was ordering business cards for new staff, so I decided to add my name to the list too.” His official Thunder House card read: “Eugene Mirman, Executive Vice President.” It doesn’t sound that funny out of context, but in the context of the stressful, serious mode the company was in, Eugene’s happy, mercurial ah-oops-what-did-I-just-do approach was wonderfully delightful.