Cambridge celebs: Will it be Sen. Affleck? ‘One never knows.’ (update) 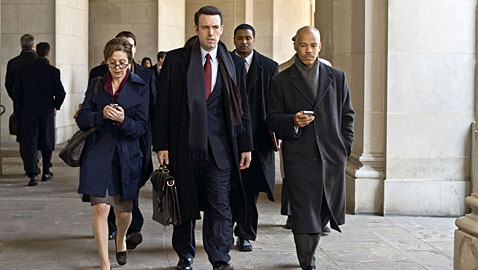 Cambridge celebs: Will it be Sen. Affleck? ‘One never knows.’ (update)

Ben Affleck: With U.S. Sen. John Kerry up for secretary of state as of Friday and Ben Affleck testifying in Congress on Wednesday on the scary goings-on in the Democratic Republic of the Congo, where he has run a charity called the Eastern Congo Initiative for the past two years, it was inevitable people would talk about Affleck running for Kerry’s seat.

Jon Keller at CBS was the first to bring it up, back on Tuesday, and there’s been some looking back at Affleck’s long record of political involvement and some potentially aspirational comments Affleck made years ago about politics. For instance: “My fantasy is that someday I’m independently wealthy enough that I’m not beholden to anybody,” Affleck told GQ in 2001, following it up with the somewhat confusing “so I can run for Congress on the grounds that everyday people should be in government.”

But on Sept. 15 his message to GQ was a little different, telling the magazine politics was “ugly … toxic … horrendous” and “complete bullshit” and summing up by saying “I don’t want to run for office.”

The conversation with CBS anchor Bob Schieffer broadcast Sunday on “Face the Nation” was a little different, with Affleck saying:

Well, one never knows. I’m not one to get into conjecture. I do have a great fondness and admiration for the political process in this country, it’s a big deal for me to come down here and be on your show that I’ve watched so much. But I’m not going to get into speculation about my political future.

For a sense of what Sen. Affleck might look like, the clip of his Congo testimony this week (to a chamber mostly empty of politicians) shows a seemingly informed, unpretentious and engaged person whom you’d be surprised to know is a professional actor – while charismatic and relaxed, he mostly reads from his prepared notes:

On Monday, though, Affleck ended the speculation via Facebook:

I love Massachusetts and our political process, but I am not running for office … We are about to get a great Secretary of State and there are some phenomenal candidates in Massachusetts for his Senate seat. I look forward to an amazing campaign.

In more Hollywood-style Affleck happenings, that con-artist movie called “Focus” Affleck was making and Kristen Stewart finally signed onto as co-star? Now she’s just the star and Affleck is out, Variety said, citing a busy schedule that includes “The Stand,” a Whitey Bulger project and writing, directing, producing and starring in “Live by Night” as making an April start date on “Focus” impossible.

He also set the story straight about “Justice League” with Hitflix this week, telling the site that he’s excited by the idea and did not actually reject working on the superhero movie back in August. “I just want to make it clear because it’s not like I had something to even pass on,” he said. “I don’t think there’s a script. I don’t think there’s anything.”

Also, the trailer for the indifferently reviewed “To the Wonder,” a film directed by Terrence Malick and due for release overseas first, is out:

Matt Damon: Damon is afraid of heights, Contactmusic.com says. Damon is a nice guy who gives lots of credit to John Kraskinski, his co-writer on “Promised Land,” and was once given advice by Steven Spielberg, Cinemablend says. The fracking industry is still freaking out about “Promised Land,” The Guardian says.

Damon told Playboy that the experience that made him think about giving up on Hollywood was seeing what studio execs did to Billy Bob Thornton’s “All the Pretty Horses,” the 2000 adaption of the Cormac McCarthy novel that ran about four hours and had a spare, antique-guitar driven score by Daniel Lanois but was released at about two hours with a soundtrack by Marty Stuart.

We did the movie listening to his score. It informed everything we did. We made this very dark, spare movie, but the studio wanted an epic with big emotions and violins. They saw the cast, the director, Billy Bob Thornton, and the fact that we spent $50 million, and they never released our movie – though the cut still exists. Billy had a heart problem at that time, and it was because his heart fucking broke from fighting for that film. It really fucked him up. It still bothers me to this day.