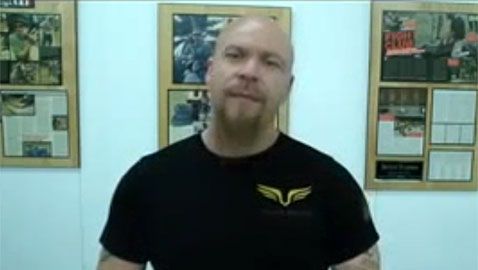 This is obvious, right? Second Amendment extremists are asserting their rights in ways that cause other citizens to confuse them with crazed killers. That can’t be good for them, since it sends the message the two literally can’t be told apart until the shooting starts.

The first example is James Yeager, who runs a Tennessee gun training company and posted a video calling for a civil war over gun rights. “I am not letting my country be ruled by a dictator. I’m not letting anybody take my guns. If it goes one inch further, I’m gonna start killing people,” Yeager said in the video, which he later took down to edit into somewhat less explosive form.

Then we have two guys walking around Portland, Ore., wearing the newly notorious AR-15 rifle to “educate people.” One told local television reporters he was “exercising my rights with a rifle to try to decrease the demonizing of peacefully exercising your rights in public.”

Predictably, there were a lot of calls to 911 by worried people. Consider that a failed exorcism.

It surely causes people who never had to address it before to think: Good, sane person with a gun or psychotic killer with a gun? Gee, I guess there’s no way to tell until it’s too late. Maybe fewer guns being carried around would clarify the issue for citizens and law enforcement.

This must be exactly the wrong message gun-rights fans want to send. It could be argued rights are always defended by the outliers, because that’s who really tests them and shows the limits of our tolerance and freedom. But the difference between the pornographer Larry Flynt being a First Amendment champion and these folks in Tennessee and Oregon being Second Amendment champions is simply that when Flynt defends his cause you might have to look away; you don’t have to invest in child-sized Kevlar vests.

What the demonstrations in Tennessee and Oregon do make clear is that there’s one way to give people some – note that it’s only some – comfort level that people carrying weapons aren’t about to start working through their paranoia or mental and emotional problems by shooting innocent people: a universally recognized systems of badges, insignia and authority.

Another way to phrase that is that weapons are best held, displayed and used by members of well-regulated forces such as the military or police.

The writers of the U.S. Constitution seemed to agree. The country didn’t have a standing army at the time of its writing, but the drafters did want a “well-regulated” militia in place.

(Meanwhile, Thursday there was a shooting at Taft Union High School in Taft, Calif., which employs an armed guard – as suggested as a cure for school shootings by the National Rifle Association – but was ultimately saved further violence by two educators talking the shooter into setting down his weapon and surrendering. So much for NRA Executive Vice President Wayne LaPierre insisting that “the only thing that stops a bad guy with a gun is a good guy with a gun.”)