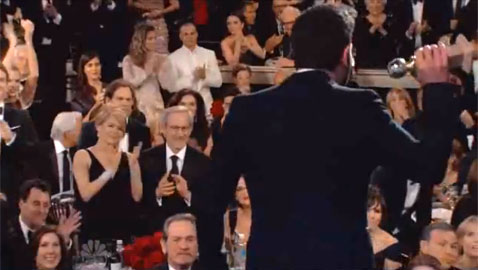 Ben Affleck: Awards, awards, awards. The latest big deal for the elder Affleck brother was the Jan. 12 Cinema For Peace Gala honoring his Eastern Congo Initiative. Oh, wait, no: It was winning a Golden Globe award Jan. 13 for Best Director after not being nominated for an Oscar for the Iranian hostage crisis film “Argo” in the same category. Universally it was noted how surprised Affleck seemed by the win, but not everyone noted his self-deprecating joke backstage after he accepted, as E! Online did:

I also didn’t get the acting nomination. I noticed no one was saying I was snubbed there.

The affair has provided just enough fodder for a New York tabloid narrative in which Hollywood liberals dissed Affleck for making a conservative film and the Hollywood Foreign Press Association “has righted the wrong,” says Capital New York media critic Tom McGeveran. (“TAKE THAT, OSCAR,” is the New York Post headline.) McGeveran says astutely: “The thing that never made sense to me is why an aversion to the politics of the film would manifest itself in the Best Director category instead of Best Picture,” for which “Argo” is nominated by the academy.

As to the Oscars, there’s talk out there (sparked by conjecture in The Hollywood Reporter) that Affleck could win a Best Director Oscar with a write-in vote, which the Academy of Motion Picture Arts & Sciences abandoned in the 1930s. But the academy has to sign off on the idea, which isn’t too likely dispute a controversy about the reliability of its brand-new online balloting system.

With the popularity of “Argo” came a tale that Affleck majored in Middle Eastern Studies during college, although he never graduated. The Eagle Rock (Los Angeles) Patch notes that although Affleck’s short-time alma mater, Occidental College, tweeted that as a “fun fact,” college Director of Communications Jim Tranquada later said Affleck’s major was officially “undeclared.” 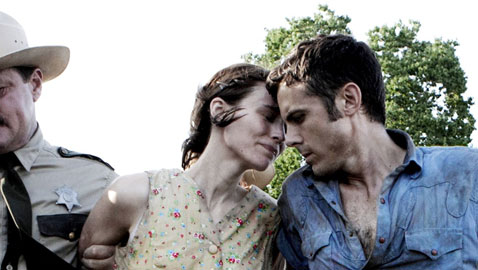 Rooney Mara and Casey Affleck in a still from the film “Ain’t Them Bodies Saints.”

Casey Affleck: “Ain’t Them Bodies Saints,” starring the younger Affleck as a criminal who “sets out across the Texas countryside to find his wife and the daughter he’s never met,” according to director David Lowery in The (New Orleans) Times-Picayune, may be the next Sundance film to make it big. Columnist Mike Scott says it’s being “mentioned as one of the films to watch this year” to see if it matches last year’s “Beasts of the Southern Wild” in box office and critical acclaim. (“Beasts” has four Oscar nominations and grossed $11.3 million domestically as of Friday.) The festival, though, has only just begun.

Traci Bingham: The “Baywatch” babe turned 45 and did a Jan. 12 photo shoot in Boston, The Boston Globe said, while Complex.com looked back to 2001 to name an outfit of hers the seventh-most risqué red carpet looks of all time.

Dane Cook: What is comedian Dane Cook up to these days? How is he feeling? The New York Times decided to write 1,156 words on that topic.

Matt Damon: Damon will guest star in season two of Showtime’s “House of Lies,” appearing as himself in an episode, according to The Hollywood Reporter.

Mindy Kaling: The hyphenate behind “The Mindy Project” is doing whatever she can to return to “The Office” for the hourlong final episode in May, Access Hollywood and others are saying. “I don’t want to, like, miss out on the last moment,” she said. “So [executive producer] Greg Daniels and I were talking this weekend and we’re gonna try to make it work so I can come back.”

Meanwhile, PolicyMic says Kaling, as a “successful person realizing her dreams” is a “Role Model For Everyone, Not Just Women Of Color.”

John Malkovich: Two trailers have come out in the past week for vehicles in which Malkovich stars: the zombie love story “Warm Bodies” and the old-yet-fun-and-dangerous-people sequel “Red 2”:

Passion Pit: For those who don’t own it and prefer their music on the cloud instead of wrapped in plastic – and on Amazon’s cloud instead of iTunes’ – the band’s “Gossamer” album is available for $5 through January here.